More than 2,000 patrons will file into The Grand Opera House on the weekend of Dec. 16-18 to see First State Ballet Theatre’s 20th anniversary staging of The Nutcracker — a blockbuster that draws 10 times the attendance of other, smaller runs.

And ballet devotees know that further on in the 2022-23 season there will be world premieres, something FSBT, Delaware’s only professional ballet company, delivers with frequency. The season is in full swing, with the dancers having performed Dracula (the Viktor Plotnikov piece that FSBT premiered to the world in 2019) in October and Up Front on Market in November. After The Nutcracker, FSBT has two productions left before summer. Triple Bill runs Feb. 17-19 in the baby grand, and Don Quixote (last performed in 2018) runs April 22-23 in The Grand.

Triple Bill comprises three world premieres. The first is by Ukrainian-born choreographer Viktor Plotnikov, a frequent FSBT collaborator who is on the faculty at the San Francisco Ballet School. This will mark Plotnikov’s second new work in the company’s repertoire for this season and his ninth world premiere with the company. Rounding out the production are pieces by two artists who were, until recently, known for dancing with the Philadelphia contemporary company BalletX — Zachary Kapeluck and Blake Krapels.

Joan Beatson, the ballet’s director of advancement, says, “Zach has a wonderful breadth of experience, and Blake is one of his contemporaries. It’s exciting for our young dancers to work with people coming from all over the place.”

Krapels, a native of Paterson, N.J., a Juilliard graduate, and now a Philadelphian, has presented his work to President Barack Obama at The Kennedy Center.

The Pittsburgh-born, Juilliard-trained Kapeluck is not new to FSBT. He was one of the choreographers, along with Maeghan McHale, who were featured in FSBT’s November production.

The World’s a Stage

FSBT calls The Grand Opera House home. While the company at one time danced mostly on the smaller stage of the baby grand and directly upstairs in Studio 1, two more of its five annual productions joined The Nutcracker this season in gracing the 1,140-seat Copeland Room — the biggest performance space in the building. 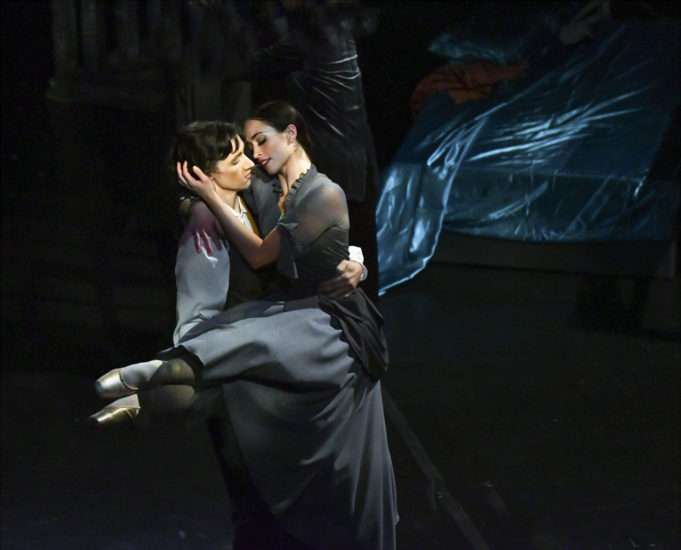 A scene from FSBT’s season-opening production of Dracula.

With its forestage arch, ceiling mural and velveteen seats, the Copeland offers a special experience for ballet patrons…and the dancers.

Beatson explains that the move to The Grand’s grandest space is not just about selling more tickets. “You need to experience Swan Lake in a bigger theater, with a big proscenium, so you can see the whole [production],” she says. “The Grand is an incredible facility to have access to. Nobody has this. With our studios upstairs and three performance spaces in one building, it’s amazing.”

Still, it’s not all about filling a thousand seats for each performance.

Says Beatson: “Our ‘Up Front’ program, performed in Studio 1 in the baby grand, is almost like a chamber concert. The dances are to smaller, shorter pieces of music. You’re close enough to the dancers to see them sweat.”

The company travels statewide to share its art. The Freeman Stage in Selbyville and Loblolly Acres in Dover are regular performance venues, and dancers from The Nutcracker take part in story-telling preview events at libraries in the Wilmington area.

Delaware’s company is considered small in the grand scheme of the ballet world. When the school, founded in 1999, expanded to become a company in 2008, it hired 10 dancers. Today, FSBT has 21 professional dancers, down from 23 before the pandemic. 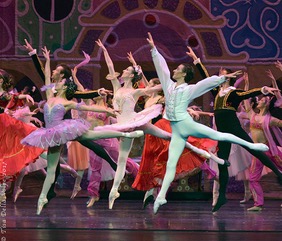 In a bigger company, an emerging dancer might not have the same kinds of performing opportunities or attention.

Of the current roster, only two dancers have been with FSBT since pre-COVID times. And of the 19 newer members, eight are brand new in 2022.

The two dancers who remain from the pre-pandemic roster are Angela Zielen and April White. Both were leads in Dracula, with Zielen once again portraying Mina, as she did in the world premiere. White portrayed Lucy in Dracula, not long after playing Odette in Swan Lake, a “very pure, difficult role,” according to Beatson. Zielen was able to explore the role she originated in 2019, and White was able to show dramatic range with the two disparate roles.

One dancer’s path to a company like FSBT may not look anything like the path of another.

Some join companies as trainees, which means continuing their training as ballet dancers while still dancing with their company, but not getting paid. Although it has in the past, FSBT does not currently offer this bridge between professional and student.

Others join bigger companies, which may mean sacrificing dancing experience for name recognition. 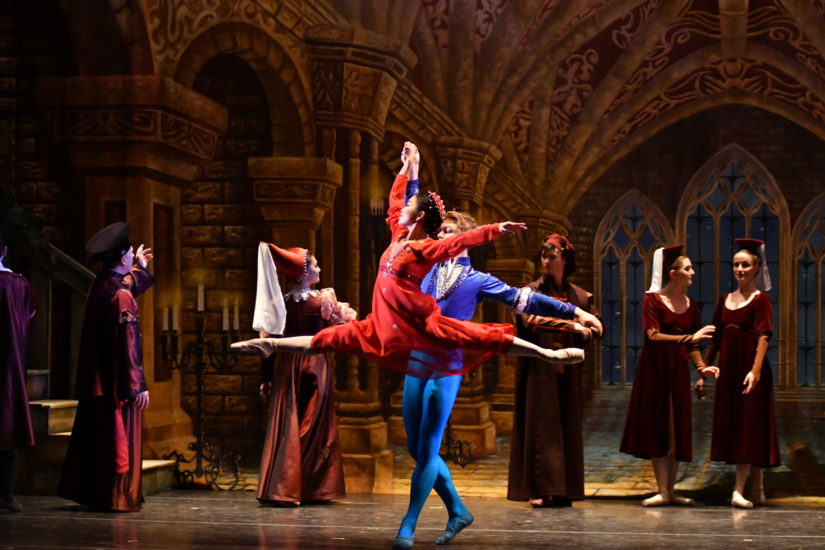 A scene from Romeo and Juliet.

Some go to college, whether for a degree in ballet or other paths, like education. Some don’t. Some are married. Some have jobs, and some pursue ca reers that might take them deeper into arts administration, or away from the arts altogether.

Beatson says that aspiring ballerinas and ballerinos should have an idea of what kind of dancing they want to do. They can look at a company’s repertoire to see if there is a fit before applying to audition.

Here in Wilmington, members of the company sign 27-week contracts. Generally, the dancers have second jobs, such as teaching dance at schools in the area or serving in restaurants. They rent apartments. They become Wilmingtonians.

Danielle Guirma, a native of New Paltz, N.Y., moved here from Richmond, Va. She likes the fact that “everybody has connections to everybody else” and family businesses abound.

Unlike in past years, the current company has not drawn its membership from Wilmington. (In 2019, of 23 dancers, five members of the company and four trainees had Wilmington roots. Only one current dancer is a Delawarean: Angela Zielen, who attended First State Dance Academy in Milford.)

“The face of the company has shifted,” says Beatson.

Most of the company is relatively young, the oldest dancer being 29.

Beatson emphasizes that being a member of a ballet company is a job.

“There might be a 16-year-old who is extremely competent, and can execute the dance,” she says, “but emotionally and mentally, they’re probably not prepared for life in a ballet company — disappointment, frustration. They aren’t students, so they won’t be treated as students.”

With 90 percent of the company turning over, it creates opportunities to re-stage familiar works — even very recent ones like Dracula — in new ways.

Beatson explains: “A lot of the choreography remains the same, but it has to be tailored every year to the individuals who are dancing. Depending on how many dancers in the company, that alone can change the choreography every year. For example, in The Nutcracker, the casting for the ‘Spanish Dance’ could be one man and two women, or two couples, or two men and one woman.”

Since The Nutcracker includes students from First State Ballet’s school, there are different levels of experience and different ages every year.

Although it is the company that most often makes the headlines, there would be no company without the ballet school.

Pasha and Kristina Kambalov, dancers who met through a Donetsk Ballet alumnus and eventually married, are the co-founders of First State Ballet Theatre. 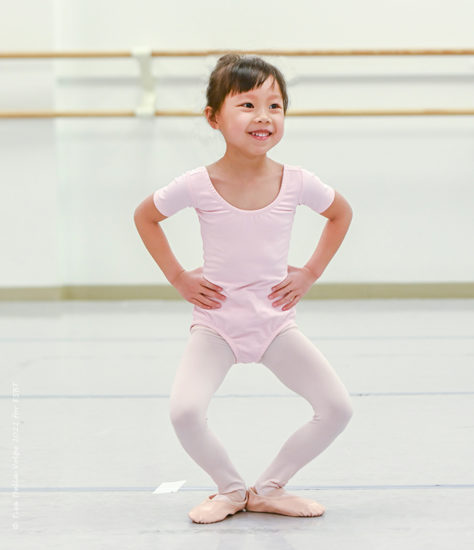 Student at The School of First State Ballet Theatre.

The pair had danced with Wilmington’s Russian Ballet Theatre from 1994 to 1999, then opened the Russian Ballet Centre, a for-profit dance school, just outside the city in 1999. Shortly thereafter, they formed a non-profit ballet school under the name First State Ballet Theatre, initially performing in Mitchell Hall at the University of Delaware, as well as Dover’s Schwartz Center.

“I grew up in a non-profit ballet school,” says Kristina Kambalov. “I wanted to make scholarships available and create performance opportunities.”

Three years in, they went big, and staged The Nutcracker at The Grand Opera House. By 2003, the Kambalovs had been invited to relocate the school’s operations to studios in The Grand.

When the school gave way to the company five years later, the group became the only professional company in the state. Starting out, FSBT staged three annual productions with its 10 professional dancers.

While the company has doubled in size, the school still supports the professional productions. In addition to The Nutcracker, which features 35 kids as young as 7 on stage, students with advanced skills were cast in last spring’s Swan Lake.

COVID-19 was not easy on the performing arts, and FSBT closed entirely for the 2020-21 season.

“We didn’t want to offer contracts and then send the dancers home. There are leases and jobs to consider,” says Beatson.

With the season canceled, the school kept First State Ballet active as the pandemic raged.

Then in the fall of 2021, the company returned with a world premiere by Plotnikov, a one-act, 25-minute piece, Fantasy to Dvo?ák. A full season, including three dates for The Nutcracker, followed. 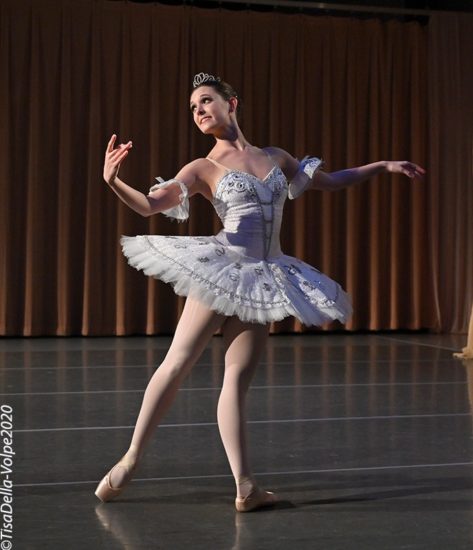 FSBT’s Up Front on Market

Its acclaimed DanceWorks! program presents free ballet training to children from local schools that are within walking distance of the studios, including Serviam Girls Academy, First State Montessori, and St. Peter Cathedral School. At the end of the year the costumed children perform three times — for each other, for their classmates and for their parents.

“The focus is getting out into the community and making ballet accessible to everyone,” Beatson says. “We want to show people that it’s not just about coming to the theater. We want them to feel that First State Ballet is their home team, that they are part of what we do.”

The Red Clay Arts Alliance has engaged FSBT at Baltz Elementary for a week-long residency. Other partnerships include the Delaware Art Museum, and the Delaware Contemporary. And new this year are storytelling and character-meeting events in libraries.

“When people see ballet, they are amazed,” says Beatson. “I hear people say, ‘I had no idea that I would like this.’”

In addition to dance classes at the ballet school, FSBT has adopted pricing and scheduling policies so families can enjoy ballet together.

The best seats in the house for The Nutcracker or Don Quixote are $57, but other seats can be had for $19.99. Patrons can choose to attend a 2 p.m. matinee on Sundays, an ideal time for family outings.