Above: The Motorcycle Santa crew (Rocco Malin is in back with sunglasses; Peter Sherwin is Rudolph; Lauren Van Hise is Elsa, Matt Place is The Grinch, Jamal Jones is Frosty) during a past visit to St. Elizabeth Catholic Church. St. Elizabeth Pastor Norm Carroll is pictured at front left. Photos courtesy Rocco Malin.

Motorcycle Santa began in 2015 when Rocco Malin spent $100 on toys, dressed as Santa, headed out on Christmas Day on his 2003 Kawasaki Vulcan and handed out the presents to “unsuspecting families at red lights and in parking lots,” he says.

Since then, Motorcycle Santa and dozens of volunteers in Christmas costumes have collected and given out thousands of toys and other fun (and necessary) items to various nonprofits and families they have adopted and have raised more than $40,000 for the Ronald McDonald House in Rockland, a home away from home for families with loved ones at the nearby Nemours Children’s Hospital.

“It’s a fun way to do good,” says Malin, co-owner of Malin’s Deli in Newark. And it’s grown each year because “everyone is looking to do good work at this time of year,” but they’re not attracted to “the same old stuff and not knowing where their work goes. We’re different. We draw attention.”

Part of that attention this season will be at the Ugly Sweater Santa Crawl on Dec. 10, with the $5 cover at a dozen Wilmington nightspots benefiting Ronald McDonald House. Motorcycle Santa is also teaming with Out & About to collect toys as part of the crawl.

The annual Motorcycle Santa Ride follows Dec. 16, with the riders gathering and giving out gifts along the way and ending up at the Ronald McDonald House.

One stop on the ride is St. Elizabeth High School. St. E’s alumni Malin and lifelong friend Matthew Place, who dresses as the Grinch, helped establish a Motorcycle Santa Club at the Wilmington school. 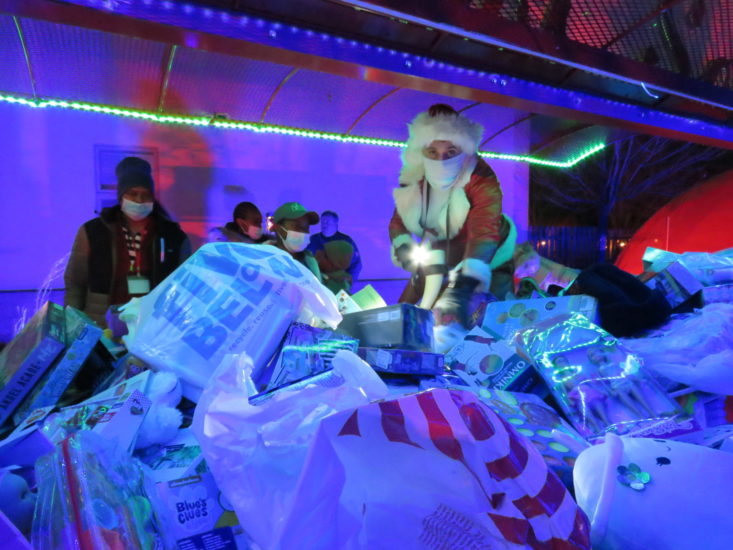 Santa (Rocco Malin) handing out gifts to the children at Ronald McDonald House.

“We’re doing what we love on the backs of motorcycles at the happiest time of the year,” Sherwin says, noting the encouragement of all the recipients’ smiles. Sherwin once with worked Malin at Northbeach in Dewey Beach and now dresses as Rudolph for Motorcycle Santa events. Knowles, who has since moved away, still serves on the group’s board.

Motorcycle Santa has grown every year, registering as a nonprofit, developing a base of several dozen volunteers, adding activities to raise funds and awareness, expanding beyond toys to toiletries and other necessities and frivolities of life, building two sleighs to carry donations and involving more than 50 sponsoring businesses.

“The mission is unconventional. That’s what people like about Rocco,” says board member Lauren Van Hise, another former Northbeach colleague who dresses as Elsa during events. Another plus: “It’s a local event, giving back to the community. You can see the difference.”

That said, “Our hope is to expand this to Ronald McDonald Houses in every state and open chapters of Motorcycle Santa,” she says.

Motorcycle Santa has already gone global. In 2019, Motorcycle Santa, the Grinch and Rudolph (aka Malin, Place and Sherwin) visited Tanzania and helped a soccer team with equipment and uniforms. The group has continued a relationship with the outfitter from their climb up Mt. Kilimanjaro, paying to send clothing, school supplies and other vitals.

The Bountiful Business of Pets