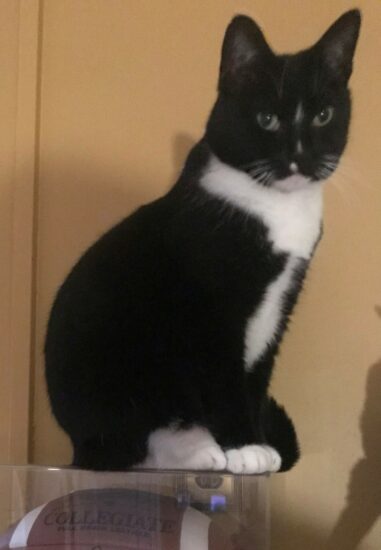 Spooky, my 14-year-old rescue, was inadvertently omitted from last month’s feature on staff pets. Her many fans demanded this makeup photo.

The media (and the rest of us) often mix up words. In many cases, it’s just a matter of changing one letter — or the same letter twice, as in these examples:

•In a News-Journal story headlined “Local pastor witnesses Newport incident,” a reader spotted this: “His home is next to the church, which is caddy-corner to the Route 141 offramp.” This term, which describes one thing being diagonal from another, is usually written catty-corner, in my experience. However, Grammarist says,  “While most dictionaries recommend cater-cornered, kitty-corner and catty-corner are more common in actual usage.” Nowhere, however, is caddy-corner accepted.

•Another reader received a brochure for the Brandywine River Museum’s annual giving campaign and this sentence jumped out: “We shutter to think where we’d be without our loyal members and friends.” Our  reader shuddered when she saw that. A shutter, of course, is a movable cover or screen for a window.

Sometimes, writers go awry by adding or omitting one letter. For instance:

•Reader and O&A staffer Beverly Zimmermann spotted a gaffe in a News-Journal story that resulted from omitting a letter. In a story about the death of Councilwoman Linda Gray, Esteban Parra and Amanda Fries reported that Council President “Trippi” Congo “sounded taken back” when told of her passing. The phrase is taken aback.

•A reader sent in an ad for a customer appreciation happy hour at McGlynns that featured “a huge complementary buffet.” That’s complimentary, as in free.

•Autocorrect on my iPhone “corrected” the past tense of lead (led) to the incorrect lead. (Sigh). Thus is semi-literacy sustained.

•From reader Rick Straitman: “In a story about thefts of ATMs in Philadelphia, 6ABC reporter Bryanna Gallagher watched surveillance video of an ATM heist and observed, ‘The two men backed up an SUV to the door of the business, grabbed the machine and drug it to their vehicle.’” The past tense of drag is dragged.

•Reader Debbie Layton spotted this in an Associated Press story about damage from heavy rains: “The front of one house laid on the sand.” The past tense of lie is lay. Laid is the past tense of lay, which means to place something. Remember that lay is a transitive verb and requires an object. So, upon reading the sentence, a snarky grammarian might ask, “The house laid what on the sand?”

•Similarly, the Associated Press filed a story with this sentence: “The Las Vegas Invitational experienced many problems, including not having medical personnel on site, which resulted in Auburn freshman Kharyssa Richardson laying on the court for 50 minutes after falling hard . . .” That should be lying.

•Here’s a dangler from noted Scottish journalist Stuart Cosgrove, writing about Esquire’s award-winning December 1963 cover of boxer Sonny Liston in a Santa hat: “Despite winning numerous magazine awards for its audacity, middle-America was not ready for a black Santa.” Middle-America didn’t win those awards, Esquire did.

A word I have just learned, it’s an informal term for a mixture of two aphorisms, idioms, or clichés. Also called an idiom blend. Here’s an example from son Steven: During his web seminar, the moderator uttered the phrase “in the essence of time.” This is a mashup of “in the interest of (saving) time” and “time is of the essence.”

Steven also notes that another participant in that webinar said he had been “literally bending over backwards” to do his job.

On WDEL, the traffic reporter frequently refers to roads that are “over top of” I-95. He could eliminate the last two words of the quoted phrase.

I saw this on a sweatshirt during the World Series. Seems it’s a Philadelphia slang term for any noun — a person, place, or thing. Like this definition: an informative jawn. 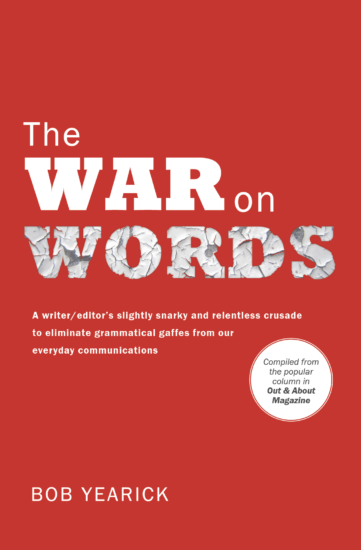 From the Publisher: Write On

A monthly column in which we attempt, however futilely, to defend the English language against ...
By Out & About Staff
October 27, 2022