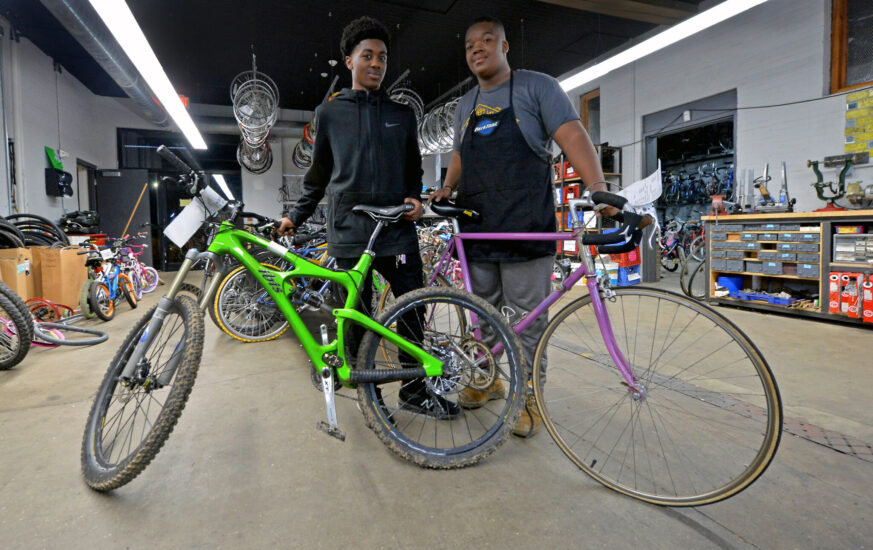 Wilmington’s Urban Bike Project, a non-profit community bike shop with the noble mission of spreading the gospel of both the joys and utility of the bicycle, dates back to 2005 in the Trinity Vicinity neighborhood. It was there that founders David Hallberg and Brian Windle began salvaging discarded bikes and discovered the need among the community’s youth for help with bike maintenance problems ranging from flat tires to derailed chains.

After a move across town and a few years of operating out of Windle’s home in the Ninth Ward, the organization obtained non-profit status and found a stable and more official home in the basement of a commercial property at 1908 Market Street.

In 2013, Laura Milburn graduated from Youth Programs Coordinator to Executive Director of UBP and helped usher in a new era for the organization.

With the Market Street location outliving its space and ability to meet the organization’s growing needs, she and her associates worked closely with the City on a new space. In 2017, UBP moved into its current home at 1500 North Walnut Street, an Upper East side property on the National Register of Historic Places. The building once served as Wilmington’s mounted police stables. Today, after a $500,000 renovation of the building financed through grants and donations, UBP is now open (though hours are limited) six days per week.

One of the cornerstones of the UBP mission is community outreach, particularly to local youth. Two sterling examples of the success of this outreach are Wilmington natives Nasir Jones, a sophomore at Dickinson High, and D’Mitri Marks, a senior at First State Military Academy.

A resident of the city’s East Side, Jones grew up riding bikes around the city with his friends. On one of his many excursions around the neighborhoods of Wilmington, a friend took him to Urban Bike Project, and he got hooked, eventually becoming one of the shop’s best mechanics. According to Jones, his training started at home.

“Most of what I know about bikes I learned from my dad and from trial and error while working on my own bikes growing up, but I’ve learned a lot from being around the shop,” he says. 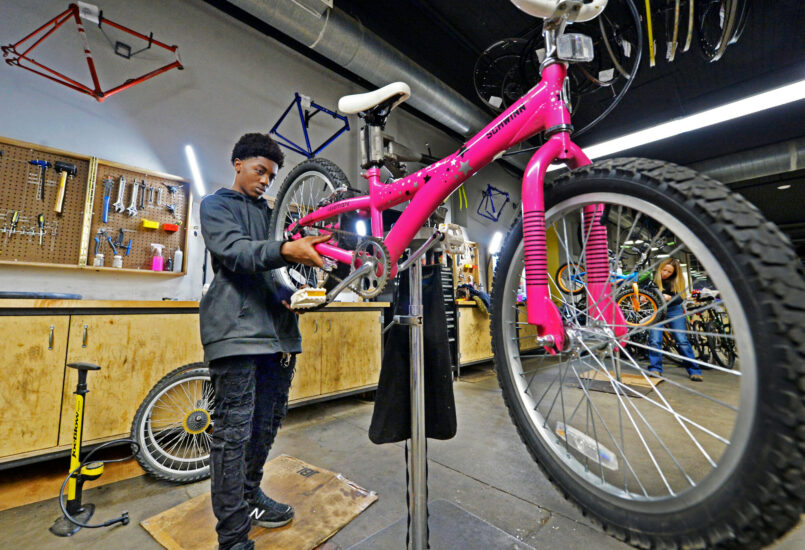 Nasir Jones, 16, was hooked on the shop from the time he discovered Urban Bike Project.

Though Jones is too modest to tout his own bike credentials, Laura Wilburn is happy to do the job for him.

“Nasir is a leader to his peers and one of the most skilled trick riders in the city; I have even heard them refer to him as the ‘Wheelie King,’ she says. “Biking for Nasir is a lifestyle and a passion — he rides every day and owns multiple bikes, one of which he got at the shop.”

Ninth Ward resident D’Mitri Marks is also a somewhat recent member of the community clubhouse Urban Bike Project has become. Starting at the shop in spring of 2022, the self-motivated Marks was already fairly versed in bicycle mechanics from a steady diet of YouTube videos and hands-on experimentation. Ironically, it was a failure that really sparked his interest.

“I totally messed up my own bike before I knew what I was doing,” Marks says. “It really motivated me to learn more and being around the shop inspired me even further.” 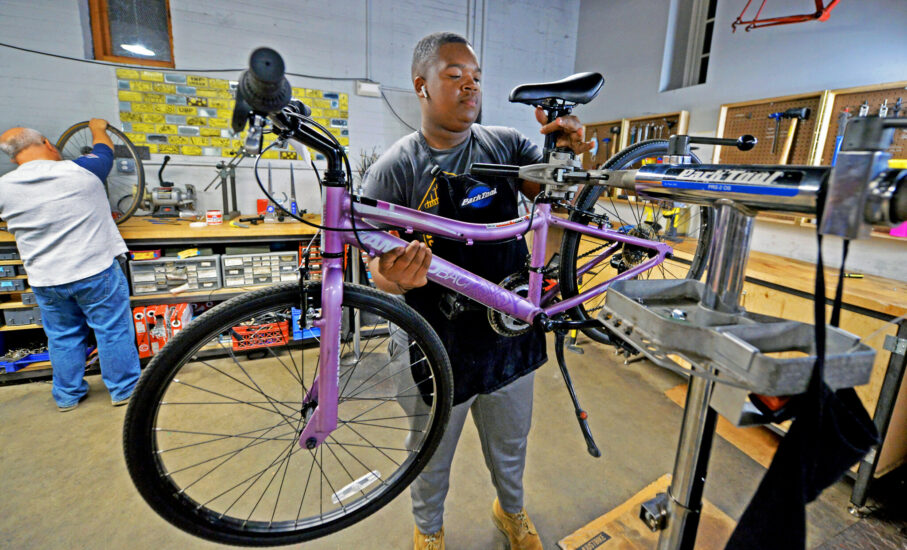 D’Mitri Marks, 17, is passionate about road riding and hopes to one day try RAGBRAI, the famous ride across Iowa.

Wilburn can’t help but express her own enthusiasm when discussing Marks’ budding enthusiasm.

“He is especially passionate about road riding and vintage steel frame road bikes (his first bike was a Peugeot, and he has since upgraded to a Lemond he bought at the shop), and touring,” she says. “I think he was inspired by an overnight ride we took to Lums Pond during summer camp to do more touring. He’s also mentioned having a goal of completing RAGBRAI (Register’s Annual Great Bike Ride Across Iowa) soon.”

As a testament to the success of UBP’s community outreach as well as the timeless appeal of the bicycle, both Jones and Marks chose to return to work during this school year at reduced hours after a long, fun summer of working as UBP junior camp counselors and mechanics. And both, along with Wilburn and a corps of volunteers, recently helped UBP reach a new record.

In 2022, the organization fixed up then donated 115 children’s bikes to Wilmington neighborhood groups for their annual Holiday Bike Giveaway. Their previous record was 108.

“It has been such a pleasure working with Nasir and D’Mitri and seeing their leadership and mechanics skills blossom,” says Wilburn. “They’ve both worked really hard to earn their positions, and the other youth in the programs really look up to them. Since they started working for us, now the others want to work for us, too.”