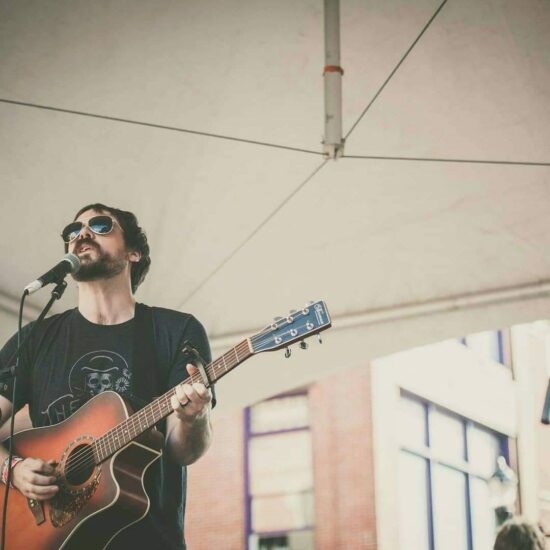 For Jason Webb, the appeal of performing live began with community theater during his teenage years.

Despite the oft-discussed quirks and frustrations associated with the Delaware music scene (the seemingly cyclical closures of beloved venues that specialize in live music, the statewide infatuation with cover bands, artists having to compete for stage real estate with the hostess stand at various local bars and restaurants, etc.), one constant is the wealth and diversity of talent that chooses to stick around their beloved home state and fight the proverbial good fight.

The state’s original music scene ranges from the sweaty, basement indie rock shows of Newark to the folk and jam-band trappings of Bellefonte and touches all points in between; and though the scene is constantly being infused with new blood, one of the great pleasures of taking in the long view of it is seeing an artist’s arc as they shed bands and identities on their journey to becoming who they truly are.

One Delaware musician on this journey is singer/songwriter/guitarist Jason Webb. Though just entering his thirties, Webb is a veteran of the music scene, having fronted the beloved and much-missed garage punks, The Holdup, in the 2010s. The more Americana-based Apache Trails (which morphed into Howl Train) followed soon after, as well as the wailing garage-blues of Cadillac Riot.

The constants in these bands were the confident, fiery vocals and charismatic stage presence of Webb, and often the rough-and-ready guitar play of Webb’s friend and frequent collaborator, Devin Zito (son of legendary local musician Butch Zito).

Though eventually called to rock ‘n’ roll, pre-teen Jason Webb was first drawn to the world of movies and theater.

“At age 12, I remember being obsessed with movies like Butch Cassidy and the Sundance Kid and Marlon Brando in On the Waterfront, as well as old radio show recordings of The Shadow with Orson Welles. I was hell bent on being an actor,” Webb says.

“My mother (a self-proclaimed witch and passionate supporter of the arts) had me in everything she could think of from Shakespeare camp to community theater at Wilmington Drama League,” he continues. “It’s there I made some of my most valuable friendships. These friends kept me wanting to act and showed me how the stage can be an outlet (which I later translated into musical performance).”

At age 15, Webb got his first guitar and started banging away at power chords. Trying to work out the songs of his then-favorite bands — Sublime, Operation Ivy and Catch 22 — was the training ground for writing his own compositions.

During these formative high school years, Webb strengthened his voice and exercised his interest in theater by being in the drama program at Mount Pleasant High and appearing in Bootless Stageworks’ production of Evil Dead The Musical as Good Old Reliable Jake.

Webb’s introduction to the local music scene and to a host of new musical and cultural influences came in the form of a job at the popular North Wilmington restaurant/bar Bellefonte Café.

“At the end of high school, I picked the guitar back up and started writing songs on my own,” Webb says. “I also picked up a job waiting tables at Bellefonte Cafe, where the owner Donna Rego would take me in for years to come. Donna and the staff became family and gave me a home away from home.

“She started hosting local music and gave me some of my first shows. The cafe was where I got a chance to cut my teeth on playing out and becoming a real musician. She also got me into artists like Link Wray, Tom Waits, Prince, The Rolling Stones, and a slew of New Wave bands.”

The next crucial step in the evolution of also came in North Wilmington at Mojo 13 (now Bar XIII), where an underage Jason Webb first encountered Devin Zito and his father, who were hosting an open mic at the bar. It was here the two musicians formed their enduring friendship and began their shared musical journey. Coincidentally, it’s also where Webb met his future wife, Emma Sue Frolich.

With years of experience now under his belt, a feeling of newfound maturity from having his first child, and with a host of new and varied musical influences (Jeff Tweedy of Wilco, David Byrne formerly of Talking Heads, the late-great Elliot Smith) spurring him on, Webb decided during the pandemic that it was finally time for him to step out from the shadow and protection of being in a band and make a more personal music statement.  With this new sense of purpose, he began writing songs for his first solo album.

“I think, as a songwriter, that it has taken me a long time to get to a point where I really speak my mind in lyrics,” he says. “Music is a therapeutic outlet, and I’ve always enjoyed that as a performer; but when it comes to the writing, I’ve always kind of held back a little. In my prior projects, my lyrics were more fun, and often about stuff like zombies and pop culture. Now, I’m more willing to tackle hard subjects like depression and relationship issues.”

As many local artists have come of age during the pandemic and produced the best work of their young careers (Sug Daniels, formerly of Hoochi Coochi, and Grace Vonderkuhn, to name a couple), the time seems right for Jason Webb to step into the light with his first solo album due early next year. With a sterling reputation and a loyal local fanbase earned through many high-energy gigs over the past decade, there’s no telling where or how far Jason Webb’s songs and muse will take him.