Hesitant at first, Musikarmageddon winners Minshara swooped in from Harrisburg to rock the baby grand

It was the Musikarmageddon triumph that nearly wasn’t.

Before the four members of Minshara stormed the baby grand stage on Sept. 27, they needed more than a little coaxing to travel nearly 100 miles from their home in Harrisburg to enter the battle.

“We were second-guessing playing Musikarmageddon in the first place,” says vocalist Aaron Miller, with a laugh. “Winning it was almost like rubbing it in our faces. It was almost surreal.”

But the band’s manager, Michael Baunach, is headquartered in Wilmington, and he convinced Minshara to enter Musikarmageddon. “He said it wasn’t one of your fishing-for-publicity sort of competitions, but legit music lovers putting on a battle; something more genuine,” says Miller. “We were hesitant and debating on whether to do it, because we’re usually not fans of how that type of setting represents original music.”

So score one big win for Minshara, with an assist from the manager.

In its seventh year, Musikarmageddon kicked off in June with 12 bands from around the region competing in preliminary rounds at Kelly’s Logan House in Wilmington. By August, the six remaining acts squared off in the semi-finals, and when the dust settled, only Minshara, Blooming Act, Green Eggs & Jam, and Xtra Alltra were left standing.

It wasn’t an easy road to victory for the out-of-towners. When pitted against Delaware-based bands, Minshara suffered in the audience vote, yet they earned the highest judges’ scores in both the preliminary and semifinal rounds. The band technically lost its Aug. 7 semifinal matchup against Wilmington rockers Blooming Act, but advanced to the finals as a wildcard selection based on the strength of its judges’ scores.

“The Minshara way is going 100 percent even if there’s only two people in the audience,” says bassist Dan Lucas. “People notice when you’re putting your energy into the show.”

By the time they were done, the band left quite an impression on the local music scene. Kenny Briscoe, the city’s director of cultural affairs, was so impressed by Minshara’s first-round performance that he booked them for the city’s Fourth of July celebration and a show at Tubman Garrett Riverfront Park in September for Wilmington’s “Cool Summer Nights” concert series. Radio station 93.3 FM WMMR featured the band as its artist of the month for October. That was in addition to more live gigs at Oddity Bar and Accent Music.

“We feel like the prodigal sons of Wilmington with how we’ve been coming back to the city recently,” Miller says. “It’s been a really cool experience, with six venues and eight shows so far in Wilmington.”

After their impressive performance at Musikarmageddon, their First State profile may continue to blossom. Minshara—a Vulcan term straight from the Star Trek universe that refers to a planet that can support humanoid life—plies a strain of atmospheric electro-pop, not too far off from the sounds of stadium-packing bands like Muse and the Mars Volta. Live shows around their Harrisburg stomping grounds have generated buzz thanks to flashy visual effects, from lights and lasers to synchronized projections of “Into the Void,” “Eraserhead,” and stock footage of deep space and oceanographic scenes.

Miller and Lucas were originally part of a band called A Public Betrayal, and, post break-up, recruited guitarist Michael Villegas. Drummer Evan Kirkley joined on in 2012. 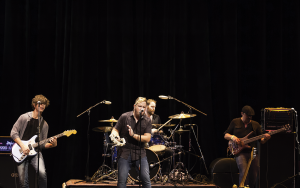 Minshara traveled from Harrisburg, Pa., to compete in the year’s Musikarmageddon. (Photo by Terry Cruz)

Tracks like “Into the Night” and “The Void,” which appear on the band’s just-released debut LP, 10, are tightly packed jams with catchy, radio-ready vocals and guitar hooks.

“We focus every song that we write on vocals, and that’s our prime initiative,” Miller says. “The catchiest and hookiest songs people can relate to.”

Musikarmageddon judge Brianna Hansen, a campaign manager for “IN Wilmington” via the Wilmington-based Mobius New Media firm, says she was most impressed by Minshara’s charismatic live performance and spirited crowd interaction.

“They rocked the baby grand as if they were playing to a crowd of 10,000,” she says. “Their energy was through the roof.

“It was definitely closer than I expected it to be, because all the bands really brought it. But they were the clear winners. The way they took over that stage, they owned it. That’s what put them over the edge.”

With their win, Minshara earned a $500 credit at Accent Music, studio recording time at TribeSound Studios in West Chester, and a main stage gig at the Wilmo Rock Circus on Saturday, Nov. 29, at World Cafe Live at The Queen.

The band hopes to parlay their winnings into more fans, in Delaware and beyond. After successful showings at Musikarmageddon, the Dewey Beach Music Conference, and at the Camden, N.J., stop of the Warped Tour, Minshara feels poised to take their act to a national level, and band members hope to make formal pitches to record labels sometime in the near future.

“We’ve got some stuff up our sleeves,” says Villegas. “We’ve worked pretty hard recently, and traveled a lot to get people to hear us, and we’re approaching the point of making a pitch. We have everything set up, we just want to refine some things, and see if we have enough experience to make a pitch and see if we can get some assistance to take it to the next level.”

While they’re still tweaking ideas, Minshara hopes to use its recording time to produce material—including, perhaps, acoustic remixes and cover songs—that would supplement 10. For now, the band can bask in Musikarmageddon glory, and the welcoming glow from a city in Delaware that appears capable of supporting humanoid fans.

“We didn’t go into this with the expectation to win,” Miller says. “We did it to gain new fans. That was our main goal.”