It’s a week before Thanksgiving, and Paula Janssen has one thing on her mind. Technically, 350 things: the last big shipment of fresh turkeys from T.A. Farms in Wyoming. Around the holidays, for gourmands and locavores these coveted birds are like the poultry golden ticket. “I’ve never seen fresher turkeys,” says Janssen. “They slaughter on Friday, deliver on Saturday.”

Across Delaware, the locally owned mom-and-pop grocery stores are a small but steadfast bunch. They have to be, considering the barrage of competition from national supermarket chains, megamarts like Walmart and Target, plus a wave of boutique grocery chains like Trader Joe’s and Whole Foods, not to mention an upcoming Wegman’s location near Painter’s Crossing.

But stores like Janssen’s manage to stay ahead by beating the competition at their own game. Along with others—like Harvest Market in Hockessin and Zingo’s in Newark—the neighborhood shops simply have to out-fresh, out-local, and out-healthy even the trendiest chains. After all, they have home-field advantage. 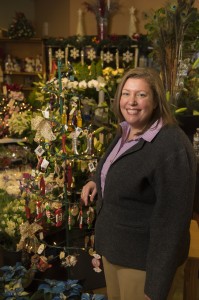 Paula Janssen deals with around 250 vendors per week to keep Janssen’s Market offerings fresh and varied.

Opened in Greenville in 1952, Janssen’s Market relies on close-knit relationships with local and regional farmers to fill its shelves with the best and the freshest. It’s one of a handful of retailers lucky enough to receive T.A. Farms turkeys, and founder Joe Janssen, Sr. has personal connections that go back for decades with farmers like Steve and Ronnie Rosazza, who own Glen Willow Farms in Avondale, Pa. The store also employs buyers who scour the Philadelphia produce market each day for seasonal produce, meats and cheeses. “We source our products very differently from other markets,” Paula Janssen says.

Larger national and regional grocery chains usually maintain their own centralized warehouses and trucking fleets, while smaller or specialized chains often purchase from cooperatives. Janssen’s, meanwhile, dizzyingly sources around 250 vendors per week. “That’s the challenge,” Janssen says. “It keeps the day interesting. We do have a lot of balls in the air, but it allows us to buy from people we trust, and believe in what they do.”

And while the farm-to-table movement has brought locally grown products back in vogue, it’s always been Janssen’s mission to support places like the cheese makers of Doe Run Farm in Unionville, Pa. The farmers gain extra revenue streams, and the store nets a superior local product. “We’re able to support local farmers and producers who are doing something different,” Janssen says. “But we benefit from their excellent cheese. The cheese is just really good.”

Bob Kleszics opened Hockessin’s Harvest Market Natural Foods in 1995 with a similar mission. The shop prides itself on a carefully selected range of organic and natural foods, nutritional supplements, and natural health care products. The store’s encyclopedic list of local vendors includes, to the north, Landenberg, Pa.’s Mother Earth Organic Mushrooms, and to the south, Dover-grown hydroponic tomatoes. Harvest, too, was one of the lucky few to carry T.A. Farms turkeys during the holiday season.

Unlike the faceless megamarts, Harvest embodies real social values, like sustainable agriculture and organic farming. The store maintains close involvement with the Pennsylvania Association for Sustainable Agriculture, the Delaware Nature Society, the Land Conservancy for Southern Chester County, and other likeminded organizations. It’s an official sponsor of the Kennett Square Farmers’ Market and the New Garden Growers Market in Avondale, Pa. It also serves as a CSA pick-up site for the Lancaster Farm Fresh Cooperative, which represents more than 70 family farms in Lancaster County, Pa. CSA programs—short for community supported agriculture—provide customers with a basket of local, seasonal fruits and veggies in exchange for a recurring subscription. Harvest even hosts an all-flower CSA from Pennsylvania’s Three Birds Bouquets, which creates seasonal organic bouquets each week for subscribers. “They’re definitely a highlight in people’s week,” says Communications Coordinator Holly Tyson.

While Trader Joe’s and Whole Foods have seemingly endless aisles of vitamins, supplements and health products, Harvest boasts an on-site herbalist and registered nurse (the renowned Donna Merrill), who offers complimentary consultations for any health concerns every Monday, Tuesday and Friday—no appointment necessary. It’s just part of the store’s focus on healthy living, which is bolstered by its varied selection of natural and organic foods. For instance, the store recently forged a connection with a North Carolina grower of fresh turmeric, a plant known for its strong anti-inflammatory properties and other bodily boosters.

“Our customers want the best for their families,” Tyson says. “And I think a lot of people are going for organic today because it is better for your health. It lacks the pesticides and the hormones you might see in large-scale growing operations.”

“People come in for all reasons,” says Tyson, citing health, environmental stewardship, Fair Trade philosophy, morals, values and beliefs. “And then there’s the quality. When you start eating with the seasons, it’s just going to be the best quality. That’s what keeps people coming back. They commit to the lifestyle because it truly tastes better. Local is the best for that, eating seasonally has the best results nutritionally and flavor-wise.”

A Variety of Local Grocers

Other independent grocers support local business in their own ways:
Zingo’s Supermarket in Newark is home to an array of locally made products, and is the headquarters of the Pike Creek Coffee Roasterie. It’s the place to find Henretty’s crab cakes from Hockessin, Wilmington’s Freakin’ Fresh Salsa, and Kennett Square’s OpaYo Greek Frozen Yogurt.

Family-owned Byler’s Country Store, with three locations in Dover and Harrington, is famous for its Amish-made crafts, furniture and pastries, plus local products like sodas and root beer from Dominion Brewery.

Meanwhile, farmers markets throughout the state continue their renaissance (A full list of locations and schedules can be found on the Delaware Department of Agriculture’s website, dda.delaware.gov).

But few do hyper-local quite like the Newark Natural Foods Co-Op, a longtime fixture on Main Street. While the USDA defines “local” produce as anything sourced within 400 miles, Newark Natural Foods maintains a 100-mile limit. Inside the store, customers can find grass-fed, antibiotic- and hormone-free steaks, roasts and pork from Weaver Valley Farms near Lancaster, or organic milk from Natural by Nature in Avondale. Its regularly scheduled farmers markets comprise 24 local vendors and craftsmen.

The not-for-profit store extols not only local produce, but local people. The cooperative began as a food buying club in the 1960s, and incorporated in 1975. Since then, the 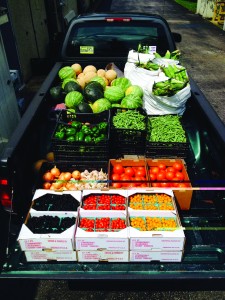 socially-conscious membership has ballooned to 12,000, with more than 3,600 active members in the past year. For a $10 household fee, any customer can become a member (though you don’t have to be a member to shop at the store). Members can continue $10 payments quarterly until a $100 lifetime membership is accrued.

This is not a coupon club. Members do receive a general 2-percent discount on purchases, but the co-op is designed to allow anyone with the desire to become involved in the entire operational process. Working shifts at the store, or volunteering at its weekly farmers market or other co-op activities, are incentivized with larger discounts. More important, members are encouraged to take part in the co-op’s democratic decision-making process by voting at meetings or running for election to the Board of Stewards. The idea is to celebrate community and fellowship while sharing the labor, talents, and resources of the like-minded membership.

With assistance from its board member architects, bankers, business leaders and volunteers, Newark Natural Foods next month will relocate its entire operation to the Newark Shopping Center (at the site of the long-abandoned Newark Department Store), which will double its capacity to around 20,000 square feet. The shop will soon host new features like an in-house café serving hot and cold foods, a coffee bar, and juice bar. The new location also will double the size of the farmers markets and provide community event space for rent.

The move came as a direct response to increased competition from places like Whole Foods, says General Manager Karen Taylor. “When Whole Foods opened, it definitely hurt our sales. But it did help us up our game,” she says. “It made us look at our positioning, our mission, and how we improve that by expanding our space. We look at it as our opportunity to reach way down into Newark,” to create something better for the community.

“What used to be our niche has become our competition,” she says. “It used to be only us and Harvest Market in this area, now it’s Acme, SuperFresh and Walmart.”

According to the National Grocers Association, there are 39 independent grocers that must battle the big guys for customer attention. The association defines “independent grocers” as privately-owned food retail companies, publicly traded companies where the controlling shares are held by a family, or food retail companies owned by the company’s employees. Delaware’s independent grocers, according to a 2013 economic impact study, generate $359.79 million in annual sales, and are responsible for creating 3,100 jobs and more than $91.81 million in wages paid.

As large chains impede on their market, local stores look to stay ahead of the curve. Whole Foods took a bite out of Janssen’s sales during its first three months of business, but customers steadily returned, Paula Janssen says. “You just have to be good at what you do, listen to your customers, and try new things to make the shopping experience fun for your customers,” she says. “If you stay the same, you fall behind.”

Whole Foods grew renowned for its selection of made-on-site items—from superfood salads to brick-oven pizzas—and its ethnic, vegan and vegetarian offerings. So Janssen’s responded in kind at J’s Café, adding dishes like Bombay curried vegetables to a menu of sandwiches, snacks and salads.

“We’re willing to try new things,” Janssen says. “If there is just one product we want from Washington state, we’ll be the first store in our area to buy that produce.”

Between a “Taste of Miyagi” fair in October—a sold-out event that welcomed producers from Delaware’s sister state of Miyagi Prefecture in Japan—and a visit from Delmar’s own Suzuki Farms in November, Janssen’s has continued to heighten its international food appeal.

Another, less tangible quality separates Delaware’s indie grocers from the pack: Call it a personal touch. Through their generations of dealings with customers, vendors and employees, local stores have fostered personal relationships in each area that feed into the overall shopping experience. At Harvest, years of outreach, community proselytizing, and direct contact with farmers developed into an uncanny expertise among employees. Newark Natural Foods’ network of eco-conscious warriors helps to support and empower an entire community, as well as many small, family-run vendors.

With less meddling from corporate overseers and stockholders, and smaller but more dedicated workforces (Janssen’s, for example, has 10 employees with more than 20 years of service), local grocers can concentrate their powers on delivering high-quality, personalized and interactive shopping experiences to their customers, no matter where the latest trends might lead them.

“We forget that food is one of the most personal experiences that we have,” Janssen says. “Knowing the people who make the food, grow the food and, in our case, sell the food, is a very comforting feeling.” 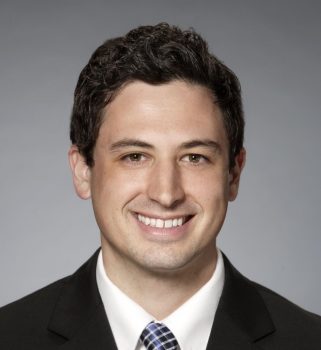 Session Beers for the Super Bowl