The Shine A Light concert series continues March 4, with a spotlight on 1977. The fundraiser once again features scores of the area’s top musicians.

And that was last year.

The Shine A Light On The Queen concert series has been a hit with the public from the outset, and this year’s event, The Shine A Light on ’77, promises to exceed those numbers on its way to another sell-out and another lucrative fundraiser for the Light Up The Queen Foundation.

Set for 8 p.m. Saturday, March 4, at World Cafe Live at The Queen in Wilmington, the concert will once again bring together an all-star musical lineup of scores of the most popular and revered singers and musicians in the Wilmington area. They’ll be celebrating the music of 1977, when punk and disco were bursting into full flower, signaling a new wave in pop music.

One change fans will note this year is the March date. In previous years, the concerts took place in February, when the chance of inclement weather was a greater variable. In 2015, a stifling blizzard hit the area on the day of the show, rendering many roads impassable.

Yet, says bassist Betty Bullington, “It was a full house. You never would have known the weather was so bad outside.”

For its first three years, the series was a musical tribute to The Rolling Stones. Two years ago, organizers switched gears and decided to fete the music of 1975. It was a 40th anniversary retrospective on what concert co-producer and performer Rob Grant describes as “a time when some of the best music was being made.”

“Besides, we ran out of Rolling Stones songs and, let’s face it, the ‘70s were cool,” he says.
“It [will be] a really big mix of funk, folk, disco, good old country and badass rock and roll,” says Shine A Light performer Davey Dickens Jr. about this year’s show. “There was a lot of stuff going on in 1977—and the 1970s as a whole—musically.”

Grant, who sits on the of the Shine A Light Planning Committee, also performs at the event. He says it gives him and other musicians “an opportunity to play some great music with really talented musicians and performers while also knowing we are helping a worthy cause.”
“The Light Up The Queen Foundation began in 2011 with a single arts education program and has developed and diversified over the years,” says Tina Betz, the Light Up The Queen Foundation executive director.

“The concert is by far the biggest fundraiser for the Foundation, pulling in approximately a half million dollars in its six-year run. The money raised has benefitted over 10,000 young people through musical arts programs,” she adds.

The foundation also provides education on social issues and healthy living, along with education through music and art.

“The concert for the Light Up The Queen Foundation is a truly worthwhile event in a city constantly struggling with their arts programs,” says Joe Trainor, who is seen by many as a leader in the area’s music and theater scene. Trainor has organized many tribute concerts for bands such as The Eagles, Queen and Genesis, outside of his own extensive oeuvre of original work. When asked for one word to describe the event, he didn’t hesitate: “Community.”

“This event brings people together and provides an opportunity to play with others you don’t normally get to play with,” he says, adding that this spirit of community forces everyone to “up their game.”
Trainor enjoys the wider palate the tribute to an entire year offers versus celebrating a single band’s repertoire, because the gamut of music is both a challenge and a change of pace. Other musicians share that view.

“There are no songs we wouldn’t want to play [on the playlist],” according to Tony Cappella, the troubadour bassist from Montana Wildaxe, who also performs with approximately a dozen other bands. “If anything, it gives us a chance as musicians to step out of our comfort zones. We love new challenges and styles.”

Cappella’s own musical career began a few years before 1977. “There is a really good chance I might be playing on a song I haven’t played on in 40 years,” he laughs.

For the performers, the journey to the night of the show rivals the actual show. 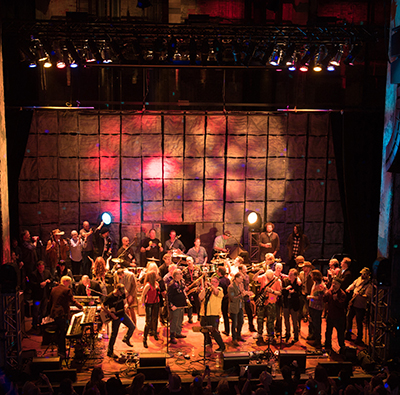 “In a way, the show itself is a bit anti-climactic for the musicians,” says Lew Indellini, lead singer of Special Delivery. “Don’t get me wrong, we love performing for this event, but the meetings, discovering the playlist, the rehearsals and collaborating with some of the most accomplished musicians in the area is one of the best parts of this event for us.”

“It’s great to have helped invent something all the performers look forward to,” says Shine A Light Committee member and event co-founder Kevin McCabe, “especially since I’ve looked up to many of these musicians for such a long time.”

Despite the high level of musical accomplishment of the individual performers, “there is no ego” involved, according to McCabe, who also performs. “Everyone has a lot of respect for one another.”

“We believe adding more production value will enhance the experience for the audience,” says Petrillo.
The meeting also was an opportunity for “rookie” musicians—most of them younger—to meet the rest of the members.

“I couldn’t believe how passionate everyone is,” says Samantha Poole, who will be performing at her first Shine A Light event.

“The gig itself is one thing, but the relationships you develop are very special,” she says. “My father used to play in The Sky Band with Nick Bucci when I was 10 years old. I’ve performed onstage with Nick since then, but it will be amazing if I get to perform with him at this year’s event.”

Poole’s father will be in attendance, making it extra special for her.

Newcomer Pat Kane, the wunderkind 20-something guitarist, may be the youngest performer at this year’s event. He will share the stage with some of the “silverbacks”—the musicians who are his grandparents’ age.

“It would be great to continue to add more young musicians and singers each year,” says Poole, to continue what has quickly become a tradition and centerpiece event of the local music landscape.
The Light Up The Queen Foundation “helps feed and cultivate the local arts,” says Betz, “by bringing music to young people who may, one day, be up on that stage themselves performing in a Shine A Light event.”

Tickets are available at the World Cafe Live website, WorldCafeLive.com. General admission is $60 and a limited number of VIP tickets are available for $250. Kathleen Ford, the Shine A Light Committee chair, says a portion of the price of the tickets is tax deductible. “But,” she adds, “don’t hesitate, because they are going quickly.”