Two seminal events took Anthony Mecca down a winding path to a career as a stuntman.

The first Ah-hah! moment occurred soon after he graduated from college and, during a job interview, was shown a cubicle—“a gray square in a maze of gray squares”—where he would be working. His distaste for that workplace environment led him to bartending, where the second incident occurred: he was fired.

And while these events propelled him into stunt work, he credits much of his continued success to a network of Delaware friends.

“The job is so exciting. I wouldn’t trade it for the world,” says Mecca, a 1998 graduate of Salesianum, where he played football and lacrosse. “But I miss the people in Delaware a lot. I have friendships that I will treasure the rest of my life. They are the most loyal fans, super-supportive. I don’t know many other people who have that sort of network. It has really helped me along the way.”

Mecca grew up behind Longwood Gardens and earned a degree in computer information systems from James Madison University, where he played rugby. After the aforementioned gray cubicle interview prompted him to change careers, he worked at Kelly’s Logan House in Wilmington, first as a bouncer (he’s 6-2 and 200 pounds) then moving up to bartender. In the summers, he bartended at Northbeach in Dewey Beach.

“I was fired for taking a mixed shot [during a work shift] at the Logan House,” he says, “but in a way it was a good thing.” Losing that job gave him a push to move to New York in September 2012 and pursue stunt work as a career. (He lived full-time in Delaware from 2006 to 2012 and worked at Northbeach until 2016.)

He credits management at both Logan House and Northbeach for encouraging him to pursue his dream of falling down for a living. “My first managers at Logan House, Rob Mayer and Rich Nofi, were always telling me to go for it and take off anytime I needed to,” says Mecca, “as did my managers at Northbeach, John Snow and Jim Cassidy. They were the best. Still to this day they stay in touch, asking how I’m doing. Since the first job I had, I’ve had people reaching out telling me they’ve seen me on TV/in the theater—saying how cool it is and how excited they were to see it.” 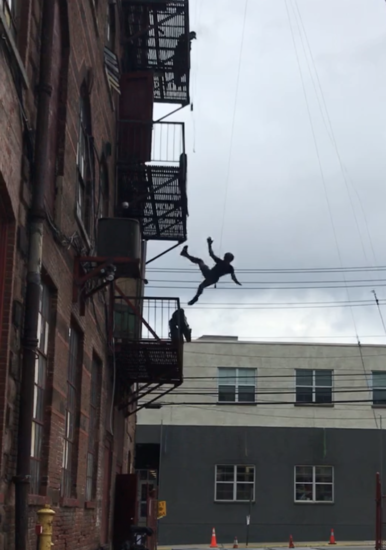 Mecca performing one of the many falls he has executed since 2005. Photo provided by Anthony Mecca

His stunt career began as a part-time gig in 2005 when a neighbor in West Chester, Pennsylvania, who worked at a Philadelphia casting agency, tipped him off to what became a month of featured background work in the James Franco movie, Annapolis.

He met the film’s stunt coordinator, who hired him as a boxer for the movie. A bit later, he heard an announcement on Philadelphia radio station Q102 asking for extras for Invincible, and that led to another month of work, this time as a football player. (Invincible is the story of Vince Papale, who, at 30, participated in open tryouts and played three years for the Eagles).

“I had a lot fun,” Mecca recalls of his early stunt work. “But I was in this limbo wondering what to do, and I needed a sign. My phone rang while I was saying this, and it was a casting agent, and I took that as a sign.” He didn’t get that job, but he did get the desire to take classes in acting and stunts in Media, Pennsylvania, and in Philadelphia, but mostly in New York.

He quickly discovered the dangers of stunt work. In 2009, he was cast in the “Life Hurts” (cue foreshadowing music) campaign for Dickies Apparel. While portraying a carpenter falling through the floor, he says, “on the third take, a hammer on the tool belt came loose and broke three ribs. There were 14 more takes. Really gnarly. But it didn’t faze me.”

Instead, he was inspired to learn more about stunt work (“falls, first and foremost”) and has shown off his skills in many movies and TV series—“being hit by cars, lit on fire, more fights than I can count and being killed more than 100 times,” including once, thanks to trick camera work, shooting himself.

“In a word, he’s thorough,” says stuntman Manny Siverio, who’s hired Mecca many times. “Anthony is a good guy. Likable, knowledgeable and tough as nails. A trusted ally that I could rely on. Tenacious, smart and witty. He works hard and listens well.”

Mecca says the toughest stunts include “fire burns, car hits and high falls past 30 feet.” Aside from those broken ribs, he’s also had a broken nose, bumps, bruises and, from twisting his body so much, “some issues with my spine; kind of a bummer.”

To stay in shape, he favors cardio, bicycling, tumbling, jiu jitsu, and Krav Maga, an Israeli self-defense and fitness system. Keeping on top of specialized stunt skills has led to work as a stunt rigger and coordinator.

Mecca’s IMDb credits include 84 for stunts, 24 for acting and one for appearing as himself (in a documentary on New York City’s stunt industry), but he says the count is far higher, considering, for example, that all 21 episodes of Happy! (a streaming series adapted from a graphic novel) that he worked on are called one credit.

Mecca tries to watch those films and TV shows, all shot in and around New York, because he says it’s the best way to self-critique. But it’s not easy for his Delaware friends to spot his work because of the way stunts are often filmed—at a distance, from the back, costumed to look like a featured performer or in heavy makeup. Financially, it’s better to be anonymous. He says being filmed close up doing a stunt is called “getting burned” for a TV series, because the casting director wants new faces for future episodes.

The easiest way to see his work is his YouTube channel. In his most popular video, “Falling for My Baby,” he uses a stunt fall—from a 20-foot boulder in Manhattan’s Central Park—to propose to longtime girlfriend Shannon Kausch. She laughed—and accepted.

But not all of his stunts are so merry for her. “Him being lit on fire kind of freaks me out,” she says, but she’s used to him randomly practicing his karate chops and other fighting moves on her.

Then there was the time she saw him perform a stunt for the Starz series Power. He is hit by a car, flies into the air and lands on the street. “The director called cut, and he’s not moving,” Kausch remembers. “It was the most awful moment, and I asked a production assistant what’s going on. The EMTs ran over. It turns out he just hadn’t heard the director, and didn’t want to ruin the shot. It’s the first and last time I’ll be on set.”