Lori Ewald has grown accustomed to the raucous sound of sports fans. The High Five Hospitality marketing manager’s office is next to the company’s Buffalo Wild Wings in Stanton. “Every time the Phillies score, the whole place goes nuts,” she says. “I run over, and all these guys are wearing Phillies jerseys.”

And whether they’re cheering or booing, it’s all good. The fans have made Buffalo Wild Wings a go-to place for sports watching — and it’s not the only one.

Local proprietors say the number of people who watch sports in bar or restaurant is returning to pre-pandemic levels. For instance, Grotto Pizza’s Sunday bar traffic is about 85% of what it was before 2020, says Jeff Gosnear, vice president of the Rehoboth Beach chain.

But the playbook for success takes effort — and it’s not cheap.

A big-screen TV or two is a staple in most bar areas. For instance, the new Kid Shelleen’s Charcoal House & Saloon in north Wilmington has five bar screens facing the dining room. Dorcea in Mid-Town Brandywine has six, a remarkable amount for the restaurant’s size. In Newark, Grain Craft Bar & Kitchen is not a sports bar per se, but this is where UD fans go to watch the game, says co-owner Lee Mikles.

However, more than a few establishments specialize in sports. In Brandywine Hundred, for example, Stanley’s Tavern has offered must-see games on TVs for decades. In the late 1980s, patrons flocked here for the Monday Night Football party featuring former Eagles middle linebacker Bill Bergey. All of Grotto Pizza’s bars are known as Grand Slam to indicate that they cater to fans. One Lewes location, however, has Grand Slam in the restaurant’s title.

Some sports-centric spots might surprise you. While the Logan House is known for live music, the Trolley Square site has

11 screens on the main floor and five upstairs. “There’s always been a big push for us to be the sports spot in Trolley — no matter what the sport is,” says general manager Joe Mujica.

The number of TVs in the space often tells the story. Buffalo Wild Wings, for instance, has as many as 100 screens in a single location, and the new Home Base Delaware on Concord Pike, which opened Sept. 1, has 30. In Hockessin, Throwbacks Sports Lounge has 15. 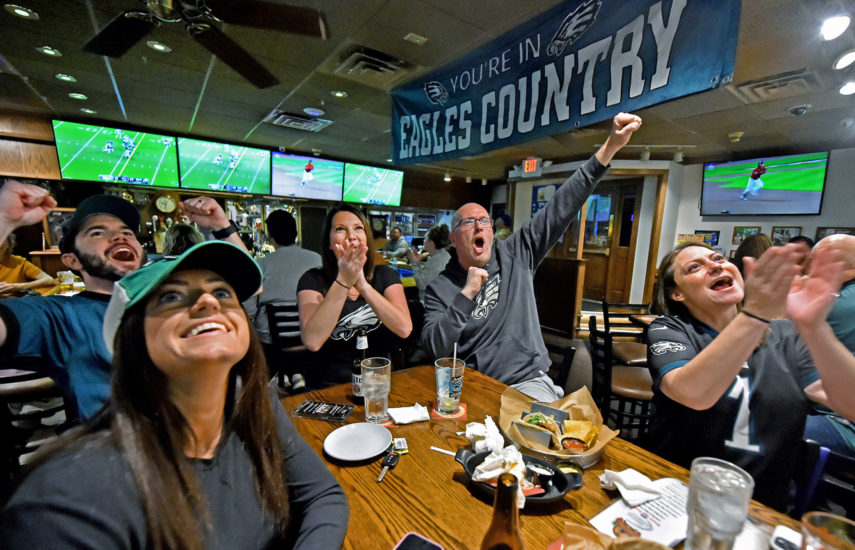 A group of fans at Stanley’s Tavern cheer on their beloved Eagles during a Sunday night game against the rival Dallas Cowboys. Photo by Butch Comegys.

Why does the count matter? For the hardcore fans, a choice is key — not every resident or visitor roots for Philly teams and sports aren’t limited to football and baseball. “There’s a 99.9% chance that your game will be on,” Ewald says of Buffalo Wild Wings’ broadcasts. (Curling competitions might be the exception to that rule.)

The more screens, the more you can offer something for everyone. One group of friends comes to the Logan House on Saturdays to watch everything from the Sixers to college games on the various TVs. Other groups have members cheering on different teams.

Watching sports is an endurance test made easier with food and beverages. There’s a reason tailgating is so popular.

While Throwbacks does not serve food, owner Ace Haney offers complimentary pizzas for Eagles games. Nearby are Asian, Italian and Mexican restaurants, and customers can bring their purchases into Throwbacks for the game.

McGlynns Pub, located in Pike Creek, Glasgow and Dover (and soon Wilmington), has a game menu with $10 nachos, $8 wings, $8 pretzels and free popcorn.  Dorcea in Wilmington also has a special menu for Sunday games, and selections have included cheesesteak spring rolls, nachos and French dip. “The items are only available on Sundays,” says owner Tony Bomba. “They’re so good that we have people asking for them during the week.” Unfortunately, the answer is no.

Like Dorcea, Home Base boasts an elevated menu, says owner Serge Zborovsky, whose first HomeBase is in New York. For example, burgers are made with short rib, brisket and chuck, and vegan dishes include General Tso’s cauliflower. There is also a section for gourmet grilled sandwiches.

“We provide a pretty polished product,” says Zborovsky, a University of Delaware graduate who wants to open more Home Base locations in the state.

However, beer discounts aren’t a guaranteed draw. In Hockessin, many of Haney’s customers prefer craft brews over bargain beers.

Phillies fans watch their team take down the Braves at Grotto Pizza on Pennsylvania Ave. in Wilmington. Photo by Butch Comegys.

There are other ways to attract sports fans. Kid Shelleen’s in Trolley Square has an NFL Loyalty Club that is free to join. Members get $15 back for every $100 spent at the restaurant during the regular season. They redeem their reward at the season’s end.

Grotto runs the Pig Skin Pick ‘Em Contest at participating locations. Guests get a form from the sports bar, circle the predicted winner and submit it to the bartender. Players receive one point per correct prediction to win prizes.

The restaurant also participates in the Delaware Lottery’s Sports Pick, which offers a clear advantage.

Haney considered participating until he realized that a nearby store sells the tickets. Now customers can make their purchase come to his bar and have a drink. Bomba also doesn’t participate, but he has heard his customers talking about their bets and checking their phones for scores.

Appealing to sports buffs is “an expensive process,” says Steve Torpey, owner of Stanley’s in north Wilmington. At present, businesses need DirecTV to show the NFL Sunday Ticket. Haney pays nearly $4,000 for the service. Since the fee is based on fire occupancy, Stanley’s pays almost $10,000 a year. However, only out-of-market games are available. So, another provider is needed to broadcast local teams and college sports. 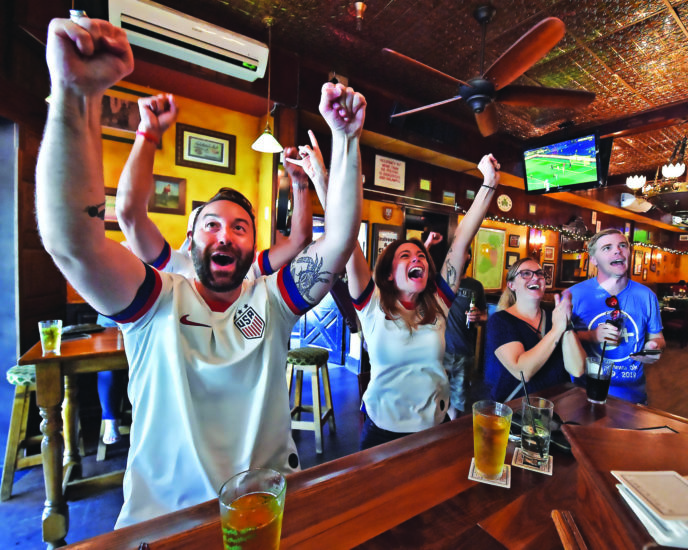 Womens Soccer fans Bill Martin and his wife Jessica Scarane of Wilmington, erupt with excitement after the the USA scored the second goal of the game to eventually defeat France. They and other fans were watching the match at Catherine Ronney’s in downtown Wilmington. Photp by Butch Comegys

And the cost might go up. DirecTV paid $1.5 billion per year for Sunday Ticket rights, which end after the 2022-23 season. Disney, Apple and Amazon have all submitted bids to become the new broadcast rights owner of the prized package.

If the contract goes to a streaming service, Haney and Torpey worry they will need to buy equipment to accommodate the new provider’s services. And will there be enough bandwidth?  Mujica is also nervous. “Being an older building, we may have to work on the networking and wiring,” he explains.

If a streaming service lands the agreement, customers may not need to travel to a bar or restaurant; they can watch at home. But will they? “There’s such a vibe and an energy” watching it with other people,” Ewald says. “It’s hard to compete with the atmosphere.”

No sooner does she finish that sentence than she hears a roar in the Buffalo Wild Wings next door. “Oh, they’re hooting and hollering,” she says, ending the call. “I gotta go over there.”

Where to Watch the Games