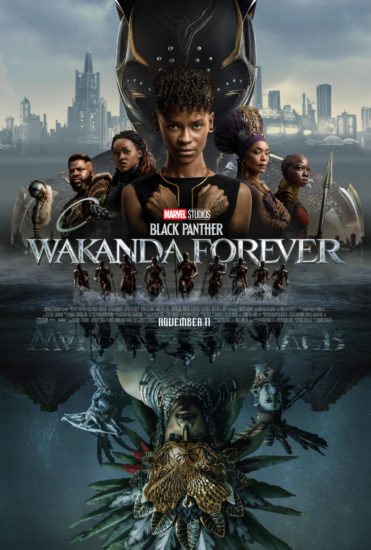 A powerful, charismatic cast comprised nearly entirely of people of color and centered on a black woman (several actually). Visually stunning art direction, costumes, and special effects. A genuine and heartfelt tribute to a tragically missing star (Chadwick Boseman) and his emblematic character. There is so, so much that Black Panther: Wakanda Forever has going for it that it seems churlish to grouse about its Marvelesque excesses. Black Panther – both the original film and this sequel – are far more narratively rich than many of its superhero comic counterparts due to the compelling depiction of an African culture that seamlessly blends traditional and science fiction elements, set against a mostly realistic geopolitical backdrop. Wakanda Forever continues that promise while introducing an entirely new culture that feels similar threats as the Wakandans from the rest of the world. Although the movie suffers from some of the tiresome flaws of most Marvel stories (seemingly invincible villains, endlessly ramped-up battle scenes), this is still a deeply rewarding film experience, because it doesn’t ever forget to tell a human story.