Ivan Thomas lost a business, then found his calling in an upstart TV station

When the stock market crashed in 2008, many businesses and personal fortunes did not survive. Ivan Thomas had owned 302 Automotive, selling wheel rims and detailing cars, for a decade, and it struggled in the subsequent recession.

By the time his daughter Madison was born prematurely at 1.3 pounds (a “micro-preemie”) in May 2013, his business had slipped away.

But Thomas — known as “Big Ive” to many — is a survivor, and he was determined to get back on his feet.

At a time when his career and spirits were at their lowest, he sought enlightenment, and found it in the practices and beliefs of Buddhism. When his baby was born with significant obstacles to her survival, he picked up a camera and started a video blog to connect with parents of other micro-preemies.

He says of those years, “I started questioning my purpose. I was trying to find me. It was like Eat, Pray, Love, but the Black version.”

During a spiritual gathering in Philadelphia, Thomas encountered a woman who told him to take as many pictures as he could, and he would have the power to heal millions. It was his Road to Damascus moment.

“I immediately started taking pictures with my cell phone,” he says. “A cinematographer [Tim Fontaine, formerly of Philadelphia, now Atlanta] showed me how the camera works. Not just taking pictures and making movies, but how it can influence human thought or human behavior.”

Then Thomas made his new skill a career by putting his camera to work and launching a digital news network that would become something much bigger.

DETV was born in 2012, with not much more, says Thomas, than a basement studio, a camera, a DETV t-shirt, and a van.

“I had no money,” he says. “When I say I drove around in a raggedy van…I mean it had no heat. All the jeans I had, the driver’s seat of the van would rip my back pocket. I still have those jeans.” 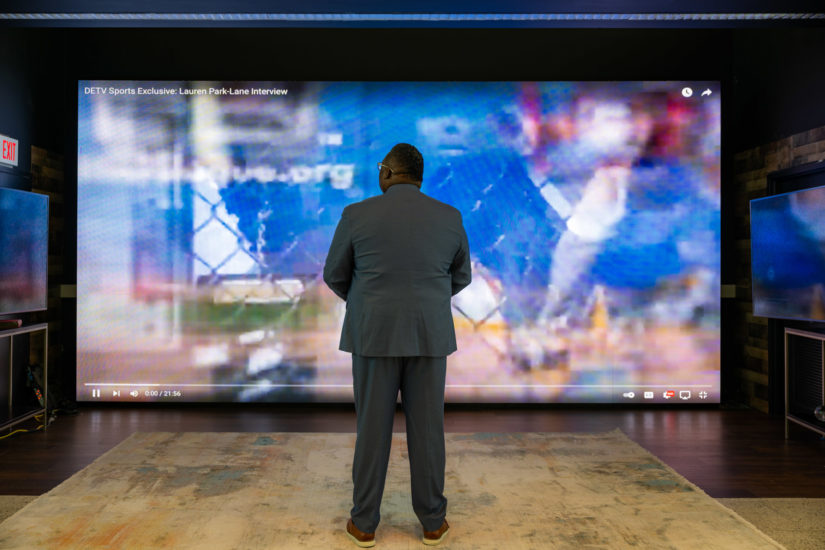 Ivan Thomas at DETV’s new studio in downtown Wilimington. It’s a far cry from his basement studio and a “raggedy van with no heat.”

But he persevered, and soon things started happening for the fledgling news website.

“I met Ivan when he was a young man with a broken-down van and not a lot of cash,” Meyer says. “But he had a camera and big dreams and a vision to turn it into one of our state’s leading news and information sources. It is truly one of the best entrepreneurial stories of the last decade. And DETV now plays a critical community role in early learning, in news, in emergency services and in sports.”

Dr. Tony Allen is another fan. The president of Delaware State University, the HBCU from which numerous DETV on-air personalities and interns have originated, says of Thomas, “He is one of the few people I know who matched his vocation — film and television production — with his avocation, giving real people power through authentic story telling. He is a man on a mission and that mission benefits us all.”

DETV’s motto, “200% positive news, 100% of the time,” might defy the laws of mathematics but it got him the kind of attention he was looking for. Community leaders began seeking him out for coverage, and people began watching.

“I wanted people to see what I saw,” Thomas says. “I knew if I kept promoting positivity in my city, it would catch on.”

Then, in 2014, Wilmington took a reputational hit when Newsweek dubbed it “Murdertown, USA.” The local daily news seemed to reinforce the moniker with if-it-bleeds-it-leads stories instead of the good news the community was generating.

Thomas resolved to counter the negativity by accentuating the positive.

“I decided to run around and tell stories and highlight the people that I saw,” he says. “I wanted people that lived here to be proud of the city.”

An Up and Down Year

Thomas’ path to being a force for positive news in Wilmington hasn’t been without it bumps and detours. Take 2016, for instance.

In June, Thomas struck a positive note when he produced a video, set to “My Boo,” by the Ghost Town DJs, a song that was suddenly trending (two decades after its 1996 peak) thanks to a dance challenge. People all over the world were recording themselves doing “the running man” dance while the song played. Thomas chronicled local police officers showing off their moves, and added Wilmington to the list of cities hoping to go viral from filming the frolicking fuzz.

The resulting clip was an entertaining show of unity, featuring elementary school students, downtown workers, and top brass bopping alongside uniformed officers. The video has nearly 32,000 views to date.

But in August, that sense of unity was shattered when Thomas was confronted in Rockford Park by individuals launching tennis balls at him and his son, threatening to call the police, and telling him that he and Ivan Jr. were unwelcome in the city park. As a Black man, he sensed that these people were racially profiling him, and he knew he had done nothing wrong.

In typical fashion, Thomas turned to what he does best — finding the positive and telling it to the people. He shared his story on social media and organized a #WeAreLove rally in the park 10 days later.

Hundreds of people came together “to celebrate love beyond color, have a conversation, and find some inspiration while being photographed through a different lens,” to quote the #WeAreLove event invitation.

Tommy Abel is the president of the DETV Foundation, the nonprofit arm of DETV. He attended the rally in the neighborhood where he once lived.

“A lot of people from the Highlands neighborhood [which surrounds Rockford Park] were there because of what Ivan and his son had experienced — being asked ‘why are you here?’” Abel says. “The people who live there wanted to communicate that that wasn’t how they felt. At the end, there was a sense of elation, of positive energy, of coming together to create something bigger and better than before.

“That’s Ivan’s superpower: being able to bring people together, from diverse backgrounds, and having the outcome be positive energy and inspiration.”

And the rally was more than just a soapbox photo opportunity: DETV asked attendees to bring items for donation to organizations that support homeless families.

Following the rally, Thomas embarked on a mini-tour with his colleague, Shoshana Kohn, and Reverend Shanika Perry to places such as Congregation Beth Emeth to create dialogue among people that look and believed differently.

As the end of the year approached, Wilmington City Council tapped him to take on the role of station manager for WITN22, the council’s government access channel.

“I got appointed and I went in there with no TV [transmission] experience,” he says. “At that time, DETV was getting legs. I’m a guy in a basement with a raggedy van, trying to make my city look good. Now’s the new stage of my career.” 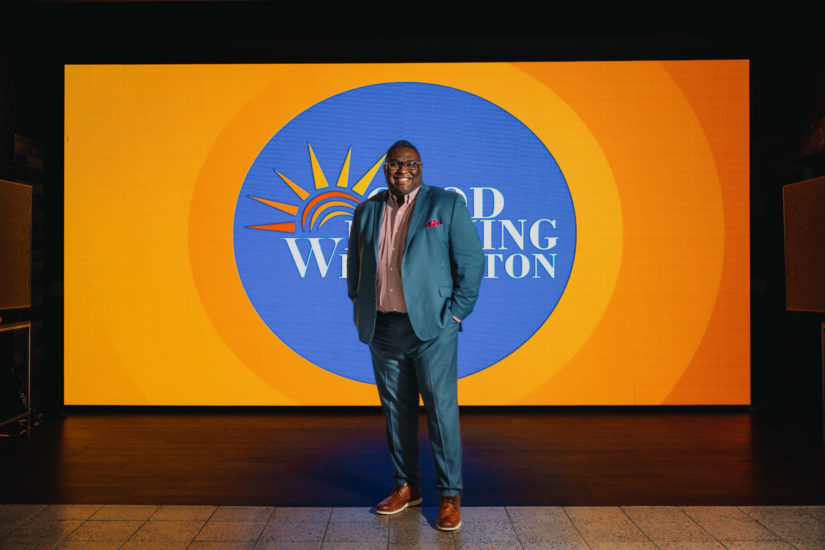 Ivan Thomas has discovered how powerful storytelling can be.

Although he only stayed in the job for seven months, Thomas says he learned a lot.

“The team that stayed there after the new administration, they taught me so much,” he says. “How to slow down, enunciate, come up with ideas, how production really works.”

Having sharpened his skills, Thomas was ready to elevate DETV when he rejoined the station in 2017. He was more motivated than ever to uplift his community, and he refocused on building his digital platform.

He partnered with others who were interested in positive news about Wilmington, joining Zach Phillips of Short Order Productions as co-anchor of The Wilmington Show, which ran from February to July of 2019 on DETV.

It was during this time Thomas began thinking about serious growth.

The Move to Lancaster Avenue

A new opportunity arose when the group managing Comcast Channel 28, a public leased-access station separately held by the City, was approaching the end of a three-year contract. The contract was put up for bid, and Thomas — and DETV — jumped in.

In February 2019, DETV was awarded the contract, and Thomas moved his operation from his basement to the studio at 2801 Lancaster Ave. on April 1, 2019.

At that time, DETV consisted of Thomas and Dennis Pritchett, his chief engineer and good friend.

“He believed in me before this TV station existed,” says Thomas.

The Delaware Blue Coats and weather reports have dominated the social media archives from that first year on Lancaster Avenue, along with a sprinkling of clips about the arts and other social events. The remainder of airtime was filled with classic television reruns.

And then hard news became de rigueur for DETV, starting with one fateful week in 2020.

On Sunday, March 22, DETV broadcast Gov. John Carney’s announcement of the COVID-related shutdown of the State of Delaware.

“We found a way to broadcast throughout the state and simultaneously stream up to 30 social media channels at the same time,” Thomas says. “After that, it was [protests arising from the Minnesota death of] George Floyd. We found a way to hit 700,000 homes and 50,000 viewers online because we knew everyone was going to be in front of a tablet or on their cell.”

“It’s crazy where we are now,” he adds. “COVID was what catapulted us to this place.”

DETV began to grow rapidly. It broadcast a live show with the Department of Labor, with topics like workers compensation. It offered “edutainment” programming for kids who were suddenly home 24 hours a day.

The station continues to evolve with new and expanded programming.

Thomas believes DETV is changing the broadcasting landscape. He sees it becoming “Delaware’s own PBS . . . its own WHYY.”

Viewers — who can watch DETV on Comcast Channel 28, or find free videos on social media and YouTube — are getting information about the law, health and wellness, and more. And Thomas believes viewers are using that information to better their lives.

“It’s got a huge impact on the community,” he says.

The station expanded to a second site last year, opening a studio in the I.M. Pei building at 11th and Market streets.

And recently, DETV contracted to broadcast 10 games from last month’s 2022 Atlantic 10 Women’s Basketball Tournament at the Chase Fieldhouse, which was picked up by ESPN2.

The programming schedule is growing, and Thomas is aiming to add 10 new shows, including one focused on financial literacy. He is opening the DETV platform to content creators, influencers, and subject matter experts who have show ideas.

No matter what direction DETV’s programming takes, count on Thomas to find a common thread with which to unite people.

“I’m a creative and a visionary and I see things way before they can happen,” he says. “One of my biggest takeaways is that DETV is here to bring people together, regardless of race, sexuality, color, religion. Our content is built to unite us all.”

We Need to Talk about Mental Health