Filmmaking was not on their radar at the time, but eventually the duo developed artistic aspirations. Their first project was to use their experiences as first responders to create a fictional comic book. From that humble beginning 17 years ago, they evolved into visual storytellers, pursing their dreams as co-founders of a film production company, Rich-Ant Enterprises, LLC.

Bryant, a Wilmington native and resident, is a Del Tech alumnus whose mother emigrated from Italy. He spent seven years as an international food business entrepreneur, living in Salerno for a time before splitting his time between Delaware, Italy and Canada. His company, Allegra Desserts S.A.S. (known in the U.S. as Divina Desserts), had grown to become the second largest dessert manufacturer in Southern Italy.

Richardson, a West Virginia University alum, has been a Delawarean since 1994 and currently lives in Wilmington. He has spent years inspiring area youth, serving as unit director of the Appoquinimink Boys & Girls Club.

The movie bug bit the duo when a news item caught Bryant’s attention.

“Eli [Richardson] and I were working on a comic book that was a fictitious account of a law enforcement scenario,” he says. “On the news was a guy from Puerto Rico who claimed to be the second coming of Jesus. I thought, ‘What if Jesus were to come back a second time…who would believe it?’”

He called Richardson and said, “We need to write a movie,” thus putting the pair on the creative path that would lead to film production.

They had known each other a dozen years or more, and the subject of screenwriting had never come up, but Bryant’s pitch persuaded Richardson.

Their next stop was the public library.

“We got books on screenwriting, we got software,” Richardson says.

They acknowledge that David Trottier’s The Screenwriter’s Bible is, to this day, the most important acquisition in their toolbelt.

They used what they learned to begin writing “The Second Coming,” a modern telling of the biblical account of Jesus. Seven months later, they had a too-long screenplay. They cut more than 10 percent of it and submitted it to a prestigious Los Angeles screenwriting competition.

“The competition, Writers on the Storm, involved some names we recognized,” Bryant says. “They actually offered feedback to the competitors. That was important to us, because we still, at that point, didn’t know what we were doing.”

Within about two months, they learned they had placed in the quarterfinals, beating out 910 other screenplays.

Since that time, they’ve dedicated themselves to numerous aspects of visual storytelling, from penning comics to screenwriting, to financing a movie and hiring a crew, to directing and producing.

A Testament to Talent

A key moment for the Rich-Ant’s history occurred when the partners attended a week-long Hollywood Film Institute course in New York City in September of 2011. The accommodations — in The Bowery neighborhood of Manhattan, a part of town once considered “skid row” — left almost as much of an impression on the budding screenwriters as the instruction.

“It was an experience,” says Richardson. “It was one of those moments where you gotta do what you gotta do. We actually stayed in a hostel, and you slept in a tiny twin. It reminded you of a storage unit and it was not even close to that size.”

Richardson describes the program, led by founder Dov Simens, as an opportunity to learn how to write, as well as how to become directors and producers. The sessions covered contract negotiations and distribution deals, giving the participants an accelerated primer on the business without the time and tuition required for a film school degree.

Says Bryant: “Dov Simens actually pulled us aside and shared with us things he did not share with rest of the class. Seeing our materials, he felt that we had a little bit of talent.”

Simens shared what the filmmakers refer to as “The Blueprint” — step-by-step instructions for getting a film from script to screen. Says Bryant: “It was almost as if Dov Simens was a gatekeeper and said, ‘You guys are ok, here’s the key.’”

But having The Blueprint did not mean immediate success for the twosome.

Bryant explains that the timeline for a film project can be many months, even years, and Rich-Ant perpetually has multiple projects in the writing, evaluation and execution stages. Overlapping of creative projects is unavoidable.

According to Richardson, they returned from New York, “shelved” much of what they had learned previously, and just started writing again.

Around the same time as the 2011 course, the screenplay for “Yesterday Mourning,” a story of a man determined to conceal his Nazi soldier past, was one of their works-in-progress. The story, which required a great deal of historical research, was ultimately expanded and published as a paperback novel in 2019.

Also in the works was a Bigfoot-inspired concept of the “found footage” movie variety. Within a few years, what was initially dubbed “Wild Man of the Woods” and would turn the pair into filmmakers themselves, thanks to The Blueprint.

“It worked just the way [Dev Simens] said it would,” Bryant marvels.

Now feeling confident about the writing, they secured funding from their families, hired local talent and a small crew, and got permission to film on a private wooded property in Montchanin.

“Wild Man of the Woods” became Creature in the Woods — their first full feature film, written, directed and produced by Bryant and Richardson. It premiered at The Queen in Wilmington in 2016, and was picked up by Summer Hill Entertainment, which published it to DVD in 2018.

Once there were some successful projects on their resumes, other work came their way. They were tapped to write a number of screenplays for hire, and they did two rewrites for Emmy- and Peabody-award-winning television and movie producer Lee Levinson.

When pressed for origin dates of even their most successful projects, the partners can’t always agree, and the back-and-forth nature of film projects contributes to the fuzzy timeline. But they see eye-to-eye where it counts.

“We are in love with the chase,” Bryant says. “It’s the journey for us. Once we reach milestones, we forget them and sometimes don’t even celebrate them.”

Despite their first endeavor — the comic book — being only half written and as-yet-unillustrated when the cinematic siren lured the authors away, an original law enforcement tale did eventually become reality. So they are, in fact, published comic book authors.

Tagged on IMDb.com as “Action; Adventure; Horror,” Creature in the Woods is not the only frightful film coming from Rich-Ant Enterprises. They are currently in pre-production for Night of the Vegan, the big-screen incarnation of a zombie story that first took root in 2009, and which was published as a 60-page, hard-bound graphic novel last year.

While wordsmiths are traditionally advised to write what they know, neither Bryant nor Richardson are vegan. However, scary stories are foundational for both of them. 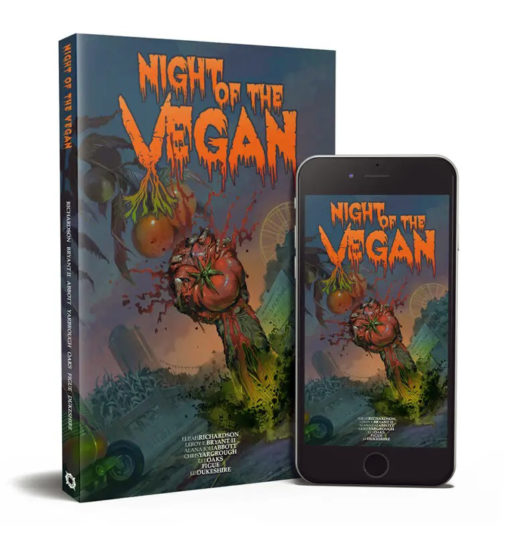 Night of the Vegan began as a graphic novel. Film production is scheduled to begin in mid-2023.

Richardson hearkens back to 1979. “I was 12 and Phantasm was out,” he says. “My friends were older than me. I snuck out and went with them. I was scared to death. I had nightmares, and to this day I really can’t comfortably watch Phantasm.”

That same year, Bryant also caught Phantasm, but it was another film he saw during his annual visit to Italy that made a stronger impact. It was Zombi 2 by Lucio Fulci, a director known for spaghetti westerns, giallo films, and horror movies.

“I did see the same movie that year and it had much the same effect on me. But my first foray into zombie movies . . . my older cousins took me to see Zombi 2. Up to that point, I was nine or 10 years old and hadn’t experienced much in the way of movies.”

Asked if horror is a preferred genre for these writers who once aspired to “whodunits,” Richardson says, “Horror is just the genre you find easiest to break into Hollywood with. You can make a micro-budget movie easier. We have written drama, comedy and dark comedy, crime, action, psychological thrillers. We’ve even pitched a cooking competition — we haven’t pigeonholed ourselves.”

The monsters in Night of the Vegan are the result of a science experiment gone awry. They are of the slower-moving variety, and the atrocities they commit are somewhat mitigated by the fact that the reanimated corpses crave plants, not flesh. And the government, rather than any creature, is the real villain.

The human characters in the living-dead fable include Willie, a mobster in witness protection, and the object of his desire, the sweet-natured waitress, Linder.

Rich-Ant’s experience with Night of the Vegan has been full of turnover, fits and starts. Nine years after its inception, the screenplay breathed new life. After prior studio interest became a nonstarter, it landed at Buffalo 8, known for such films as BlacKkKlansman, a biopic from Spike Lee, and Street Gang, a documentary about Sesame Street that’s bound for HBO.

Financing is under way, and production is set to begin by the middle of 2023. The farm-centric shoot was recently moved from Delaware to Georgia, where a tax credit for filmmakers increases the locale’s appeal.

The on-screen talent is under consideration now, and casting may determine whether Bryant and Richardson end up directing. If they get a “wish list” actor, that player could push for his own director, which would mean the Delawareans would step back and executive produce.

Not content to simply become creatively successful, Bryant and Richardson have altruistic goals for this movie and future projects. They hope to shelter and employ displaced veterans and the homeless, and arrange for immediate and longer-term support for these individuals.

That unselfish attitude has helped make a fan of Rev. Dr. Christopher Alan Bullock of Canaan Baptist Church in New Castle. Calling himself  “a friend, supporter, pastor and fraternity brother,” he has witnessed Bryant and Richardson’s trajectory.

“I think the most important thing about these two gentlemen is that they exemplify the power of faith and persistence,” says Bullock. “They had a dream, and they never gave up on that dream. And they pursued it with faith in themselves, faith in God, and faith in their talent.”

The partners are in a good place right now. Bryant is able to devote time to his wife and college-age daughter while pursuing the business of creating. Richardson divides his time between Rich-Ant Enterprises and his job as a behavior interventionist specialist at Warner Elementary School. He has cast his adult daughter and young grandchild in his cinematic endeavors.

The pair’s ultimate dream involves a Hollywood icon and ties Richardson’s old life with his new one.

“I would like to write for Denzel Washington,” says the career youth leader. “He’s been a spokesperson for the Boys and Girls Club for decades. He says the Club saved his life growing up. Plus, I love the way he acts, his skills; his presence is incredible.”

Adds Bryant: “I have to say my dream is his dream and vice versa.”

As usual, the pair are in lockstep.