Above: In his day, Ed “Porky” Oliver drew some of the biggest galleries on the PGA Tour.

Most people in Delaware know about the Ed “Porky” Oliver Golf Course in Wilmington. Not as many know the story of the legendary golfer for whom it is named.

Ed Oliver, a Wilmington boy through and through, was one of the best players in the world during the most legendary era of golf history, when giants like Byron Nelson, Ben Hogan and Sam Snead dominated the sport. And hanging with them, stroke for stroke, was Ed “Porky” Oliver.

Oliver’s career spanned three decades, from the early 1930s to the early 1960s. That’s when professional golf came of age and became the huge spectator sport that it is today. Oliver was one of the spectators’ favorites because he was an entertainer as well as a go-for-broke golfer.

It’s also a fact that Oliver has never received his just due in golf history. Officially, the PGA says Oliver won eight events in his career, with 22 second-place finishes, 17 third places and 145 top-10 finishes. Three of those second-place finishes came in Major events — the PGA, the U.S. Open and the Masters. And he won the Western Open in 1941 — beating, among others, Hogan and Nelson — when that tournament was considered a Major until it was supplanted by the Masters. He was also chosen for three U.S. Ryder Cup teams, including 1953, when he was paired with another great golfer from Delaware, Dave Douglas. 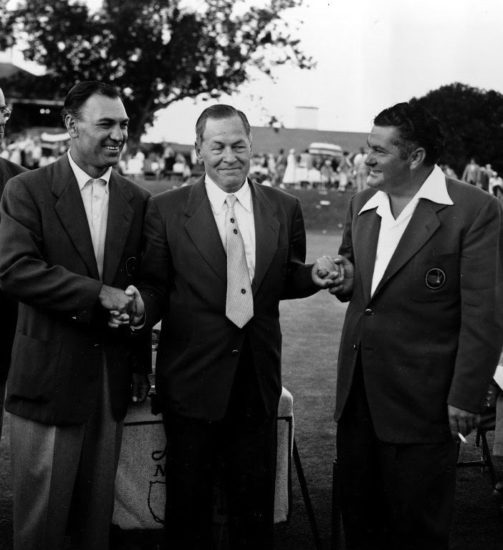 That’s an impressive resume, and it doesn’t even include all the other tournaments he won in those barnstorming days. Still, Oliver is rarely mentioned among the Hall-of-Fame golfers against whom he competed — and often beat — and that’s something that riles John Riley, a local writer and former captain of the University of Delaware golf team who also happened to be a boyhood friend of Oliver’s children. Plus, his father, Curt Riley, was a prominent local golfer in the 1930s who competed with and against Oliver many times and used to regale his son with tales of the legendary Porky.

Pied Piper of the PGA

John Riley was instrumental in getting Greenhill Golf Club rechristened the Ed Oliver Golf Club in 1983, an idea that was first floated by legendary sportswriter Al Cartwright in 1962. Riley has also written a detailed book about Oliver’s career, titled How He Played the Game: Ed “Porky” Oliver and Golf’s Greatest Generation. And to prove Oliver was a key part of that generation, the book’s cover shows Oliver posing on a golf course with Sam Snead and Byron Nelson. 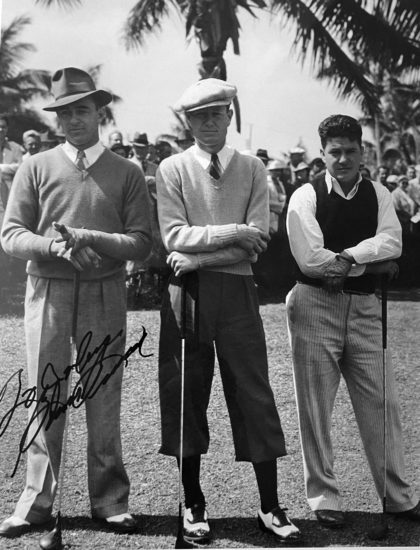 “He had a tremendous impact on the game,” Riley says. “Everybody absolutely adored the guy. He was like the pied piper, the way he connected with people. He had a magnetic personality and he used to get the biggest galleries on the PGA Tour.”

Part of his appeal was the fact that Oliver wasn’t your typical country club member who played with the rich kids — he was blue collar, not blue blood. He was born in 1915, grew up on the streets of Wilmington, and got his start in golf working as a caddy at the old Wilmington Country Club — which eventually became Greenhill Golf Club, which eventually became Ed “Porky Oliver” Golf Club.

There were better golfers on the PGA Tour of the 1930s, 1940s and 1950s, but there were none who enjoyed the game or the gallery as much as Porky Oliver. He interacted with the fans and bantered with them and entertained them with his assortment of trick shots. And then he’d tee off and one of the biggest hitters on the PGA Tour would slam a long drive, and the fans would ooh and aah.

And it wasn’t just the fans. The media loved him, too. More importantly, Porky Oliver was loved and respected by the other golfers, including some of the greatest the game has known: Bobby Jones, Ben Hogan, Sam Snead, Byron Nelson, Gene Sarazen and, a little later, Arnold Palmer and Gary Player.

Riley interviewed Player for his book, and the Hall-of-Famer said this: “I played with Porky many times — he was a wonderful golfer with a wonderful sense of humor. I wish these young tour players today could have seen him play.”

Sam Snead, who saw first-hand Oliver’s rapport with fans, once said he wished there “…were newcomers with the natural ability to play to a gallery like Porky Oliver.”

And Peter Trenham, the historian for the Philadelphia PGA who saw Oliver play, said this about the popular appeal of the Wilmington golfer: “One of the most colorful players to ever play the game… Oliver had many accomplishments, but his greatest impact was his role in attracting fans and helping to popularize the golf tour.”

Finally, this from Ken Venturi, a former championship golfer and longtime television announcer: “Porky Oliver was the greatest ambassador to golf who ever played.”

You’re in the Army Now

Unfortunately, Oliver was as well known for his bad luck as his bubbly personality, lowlighted by the 1940 U.S. Open at the Canterbury Golf Club outside of Cleveland. He tied for the lead after the final round and was ready to begin a playoff with Lawson Little and Gene Sarazen for the championship of the most important golf tournament in the world. However, he was disqualified because he teed off too early due to a mix-up. The decision was universally criticized by the media as well as other golfers, including Little and Sarazen.

“That bothered him for the rest of his life,” Riley says. “He was at the peak of his career and he was mentioned with the biggest names in golf, and winning the Open would have really added to his legacy.” 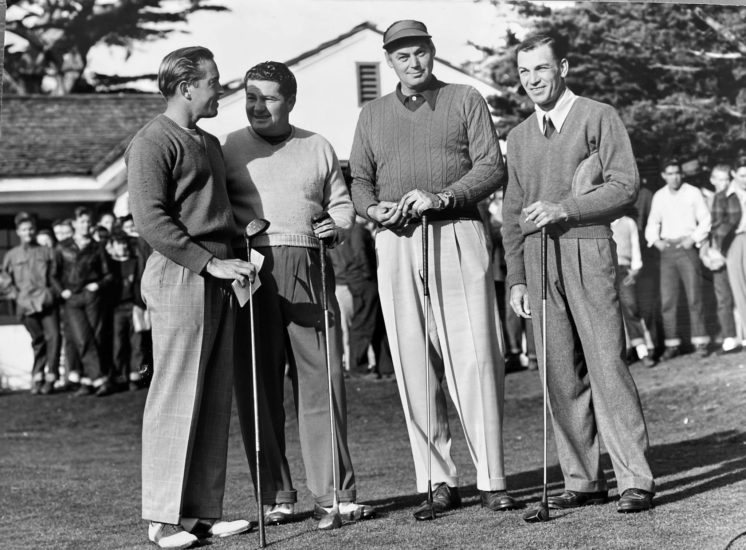 That legacy got sidetracked when Oliver lost five years of his career while he served in the U.S. Army during World War II. Oliver had won four tournaments the year before his induction in 1941 — including the Western Open, which was considered to be a Major tournament at the time — and he was selected as the PGA rookie of the year. Then his career was put on hold for the duration of the war.

“He was one of the top five players in the world when the draft got him a full year before Pearl Harbor,” Riley says. “And I think that definitely affected him after the war. Even though he still competed at a high level, he didn’t win at the same rate as he did before the war.”

Riley points out that during the time Oliver was in the army, his three best-known contemporaries — Snead, Nelson and Hogan — combined to win 62 PGA titles. It’s fair to assume that Ed Oliver would have won his share of those titles, too.

“He went into the Army before any of the other golfers who were drafted, and he stayed in the Army longer than anybody else on the Tour,” Riley says. “That definitely should be considered when you look at Porky Oliver’s career — his prime years were spent serving his country.”

Dancing With the Stars

Oliver certainly didn’t get rich in an era when a top 10 finish sometimes only paid a couple of hundred dollars. (As a comparison: Scottie Scheffler and Will Zalatoris tied for second place in the 2022 U.S. Open and each pocketed $1,557,687, then doubtlessly returned to the kinds of homes befitting young millionaires.) Oliver finished second in the 1952 U.S. Open and pocketed a total of $2,500, which, after expenses, barely gave him enough money to make it back home to Wilmington and his modest row house on E. 31st Street. 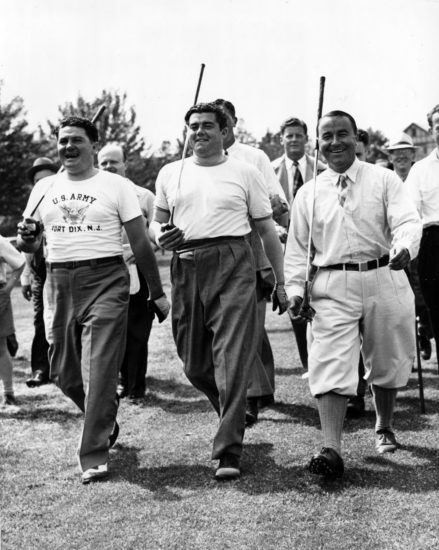 Ed Oliver (l) and colleagues have some fun as marching golfers. Oliver sacrificed prime years of his golfing career for service in the Army.

Still, to quote the great Muddy Waters, Porky Oliver loved the life he lived and lived the life he loved. He got to play golf on the best courses in America and he also played in Europe, South America and Asia. Plus, Oliver rubbed elbows on the golf course with other sports heroes like Joe Louis, Lou Gehrig, Ty Cobb, Roger Maris, Paul Hornung, Babe Zaharias and Rocky Marciano, as well as entertainment icons like Bing Crosby, Bob Hope, Johnny Weissmuller, Jackie Gleason and Dean Martin. And they all loved him.

Not bad for a kid from 31st Street.

But even his biggest fans acknowledge that Oliver, even with the long layoff from competitive golf, should have been more successful than he was. Oliver was wildly inconsistent throughout much of his career and tended to fade in later rounds of tournaments. Of course, his less-than-peak physical conditioning didn’t help his endurance — he didn’t earn the nickname of “Porky” because he stuttered like an animated pig.

That nickname actually started as “Porkchop” because of Oliver’s legendary appetite, but there’s a good chance you never heard the nickname by which he was mostly known in his hometown — “Snowball.” That reportedly came from his strong arm and ability to pelt other kids during winter snowball fights.

Tragically, Oliver’s career and life ended way too soon. A heavy smoker, Oliver was diagnosed with lung cancer in 1960 and returned to his home in Wilmington to live out the rest of his life, although he continued to play golf for as long as he was able.

Porky Oliver died in 1961 at the age of 46, but thanks to people like John Riley, his legacy will live forever. To order Riley’s book, How He Played the Game, go to OliverGolfBook.com

Where to Watch the Games