For more than three decades, award-winning folk artist and educator Eunice LaFate has used her background in education and visual art to help transform the lives of many of Wilmington’s East Side youth. Her message to them: “Don’t let your environment define you.”

Born in St. Ann, Jamaica, to a family of eight girls and two boys, LaFate remembers her childhood fondly. “My mother was a homemaker and my father a preacher,” she says. “And, while we grew up poor, my parents instilled strong values into me and my siblings.”

She recalls her favorite “memory gem,” or short precept based on moral and Christian values, passed down to her as a young child:

LaFate is a self-taught artist whose first canvas was the walls in her house. Her passion for drawing and painting developed significantly when she attended Mico Teachers College in Kingston, Jamaica. 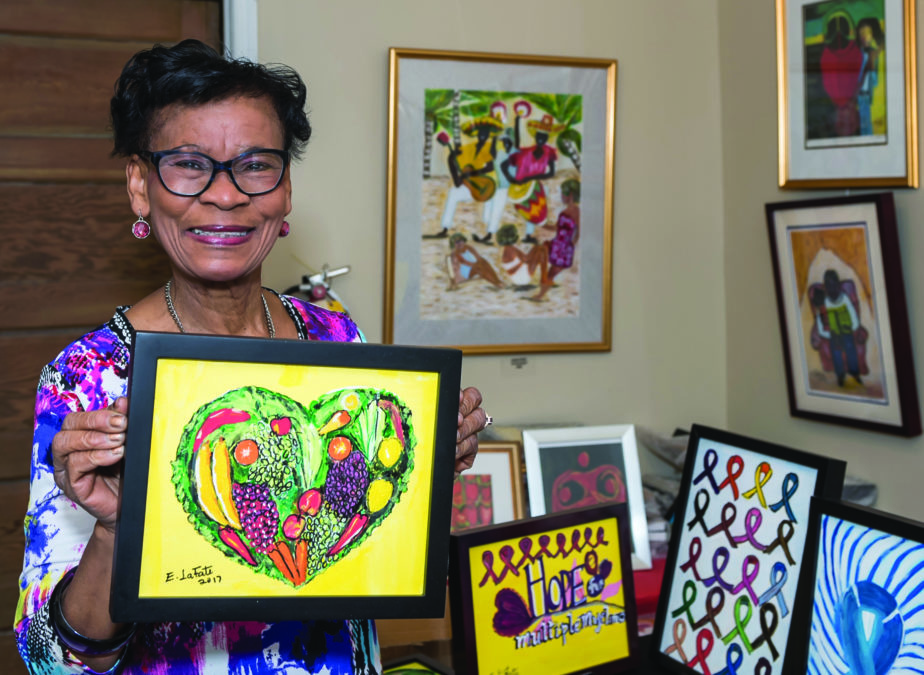 Eunice LaFate has been inspiring youth with art since she arrived in Wilmington in 1983. She currently operates a gallery on the 200 block of Market Street.

“For every lesson it was required to have a visual aid,” she says. “That is where my creative talent came to being. Instead of copy and pasting, I drew my own pictures.”

As time passed, LaFate’s work in folk art became deeply rooted in her experience of inequality.

“The core of my work is about humanity and all of its diversity, racial harmony and equality,” she says. This passion for seeing the beauty of diversity, despite the racism she experienced after moving to the United States, inspired LaFate to pursue a career in teaching and later in human services administration.

A lithograph of one  of her acrylic paintings, “The Melting Pot vs. the Salad Bowl,” hangs in the William J. Clinton Presidential Library and Museum in Little Rock, Ark. The work is a metaphorical depiction of a multicultural society—the left side depicts the homogeneous “melting pot” of cultures and the right side a heterogenous “salad bowl,” where each individual culture is represented.

LaFate left Jamaica in 1983 to move to Wilmington, where she worked as a teacher for one year at St. Peter’s Cathedral School, then ventured into the world of finance. After 12 years of banking, she took a position with the Wilmington Job Corps Center, where she worked with youth ages 16 to 25, who came to the program labeled as “at-risk.” Realizing how outdated and damaging the label could be, Job Corps’ management changed it to “at-promise” and made sure that each student began the day with the affirmation “I’m at-promise.”

Using the Arts as Prevention

With the skills she gained as an educator and artist, she created her own program, “Arts as Prevention,” which uses the visual and performing arts to positively impact and engage youth. LaFate used this model to influence the lives of six neighborhood boys, including her son, Jermaine, and his two friends, Andre L. Harris and Kevin Frazier.

Four of the six boys continued learning under LaFate’s mentorship, from when they first met her until they graduated from high school. All four boys finished high school and college, and are now leading productive lives.

Jermaine and his friends grew up at the height of the “crack-cocaine era during the late 1980s and early 1990s,” according to the 2013 Wilmington HOPE Commission’s Participatory Action Research (PAR) Project study. Each summer during that time, the LaFates’ basement became a safe haven, where she taught youth to “set goals and principles” so that their external environment, which was filled with violence, drugs and crime, did not define them.

“Me and my friends grew up in a place that had many challenges,” says Jermaine LaFate. “The arts became a refuge from what we were experiencing outside of our homes.”

Now a scrum master and senior agile coach at Choice Hotels International, Jermaine is re-discovering his passion for the spoken word. “Growing up in the late ‘90s, we listened to a lot of hip-hop,” he says. “The genre spoke of the Black experience in impoverished neighborhoods,” something which inspired Jermaine and his friends to create and critique each other’s raps.

Frazier, who was the best man at Jermaine’s wedding, took a circuitous route to success in the music industry. He started by working backstage on JaRule’s Mid-Atlantic tours, and eventually became a co-owner of DollarZEnterprize, a production company that will open its first recording studio later this year in North Hollywood, where Frazier has lived for the last five years.

Harris, who met Jermaine through Harris’ cousin, calls Eunice LaFate “mom” because of her strong influence throughout his childhood. Her guidance helped him discover his passion for teaching and entrepreneurship. Harris became an entrepreneur at age 16 and established his own company, Cliq Records Entertainment. He is now an apostle at the Breakthrough Reformation of Churches in New Castle, which has ministries throughout the United States and abroad.

From Grief to Growth

In 2004, LaFate would use the lessons learned from Arts as Prevention and apply them to a new project. She worked with a group of students who had been kicked out of school and placed in a Kingswood Community Center program called “Project Stay Free.” She taught the students to tap into their creative talents to make “clean money” by encouraging them to create and sell music CDs, paint portraits of families to sell for a commission, or write and sell their poetry.

LaFate continues to believe that in this time of immense societal change, the arts are invaluable in showing the youth of today that we must accept each other as equals.

“Our society has an appetite for tolerance, rather than acceptance,” she says. “As a society, we need to plant and nurture the seed of positive race relations, rather than wait until crime and violence is ripe. Like a tree, it is our responsibility to constantly instill positive values of respect and be understanding of people and their differences.”

“We’re not going to change adults,” she says, “but we can help steer children in the right direction  so that they can grow up to know justice and acceptance.”

LaFate’s latest work honors the coast-to-coast protests sparked by the deaths of Ahmaud Arbery, Breonna Taylor and George Floyd. Titled “Know Justice,” the piece features four faceless figures?—one white and three Black, the latter with their hands raised ?—and evokes the call and repeat message activists shout, “No justice, no peace,” at many of the protests around the country and throughout the world.

The next article in this series will feature Kevin Frazier, entertainment product manager and co-owner of DollarZEnterprize