High 5 Hospitality’s name originally referred to five Buffalo Wild Wings franchises, and it also paid homage to the high-fives that co-founder Bobby Pancake loves to give.

Now it also refers to Pancake and co-founder Steve Wheat’s goal of operating five restaurant concepts, with four down so far: Buffalo Wild Wings (eight locations in Delaware and Maryland, starting in 2004); the Stone Balloon Ale House in downtown Newark (2014); Limestone BBQ and Bourbon near Pike Creek (2018), and Eggspectation in Christiana (June 26).

Pancake promises to figure out that fifth brand by the end of next year. Culinary Director Robbie Jester, whose love of barbecue led to Limestone BBQ, is suggesting an Italian steakhouse. “We have the capability to be finer and more approachable,” than the company’s current lineup, says Jester.

“It’s a great idea,” Pancake says, noting it’s one of many offered by his staff. “But it all hinges on location and timing. I’ve learned never to say never. And to be patient.”

Whatever it will be, it will be the best, he repeats several times during an interview at Eggspectation, noting that he wants High 5 to be “mentioned in the same sentence with Harry’s Hospitality Group, the Platinum Dining Group and SoDel Concepts”—Delaware companies known for their individual restaurants, not their franchise locations.

Consider Eggspectation, with High 5’s franchise territory covering a 60-mile radius from its Christiana location. The concept, which began in Montreal in 1993, emphasizes crepes, omelets, and other egg-based dishes; an early opening; brunch dishes available at dinner; and lots of eggy wordplay. “Some concepts are oversaturated, like breakfast. We’re late to the game, but we’re the best,” Pancake says—again.

“There’s always room for the best,” Jester adds, “not just guest-forward, but behind the curtain.”

Being the best centers on attitude, Pancake says, citing High 5’s five core values: Serve others well. Take responsibility. Attitude is everything. Results matter. Sell more. They’re distilled into a corporate acronym, STARS. “We all are stars,” he says. “Some shooting, some fading, some bright and shining. You get to choose.”

Pancake’s leadership of High 5’s 640 employees is influenced by his humble beginnings. He was raised on a West Virginia farm, started work as a chicken cutter and cook at KFC, and did not go to college. (Along the way, the received a rejection letter for employment at IHOP, which he treasures.)

“I didn’t have anyone to develop me. I had to reach and grasp on my own. I have a love for this business and a love of developing leaders,” he says, which has led him to be active in the Delaware Restaurant Association, the Buffalo Wild Wings Franchise Advisory Council and the Buffalo Wild Wings Political Action Committee. He and High 5 Marketing Director Lori Ewald are Dover Air Force Base’s only active national civic leaders; in those roles, they learn about and advocate for military families.

“It felt like a home even before they had a building in place,” McCardle writes on www.bobbypancake.com. “This was the start of a new life for me.”

Pancake and Wheat met while working at Buffalo Wild Wings and moved here 15 years ago when they got the franchise for Delaware and Maryland’s Cecil, Harford and Wicomico counties. “We’re very in tune with the people who live, work and play in Delaware,” says Pancake, who lives in Bear. Wheat recently moved from Delaware to Landenberg, Pennsylvania.

High 5 also gives back to the community, donating more than $1 million over the years, Ewald says.

Their work has earned multiple honors, including New Franchise of the Year by Buffalo Wild Wings in 2005; the company’s Founder’s Award in 2009 for Pancake’s “vision, enthusiasm, work ethic and humility”; the National Entrepreneur Success Award by the Small Business Administration in 2010; and Restaurateurs of the Year by the Delaware Restaurant Association in 2011.

On his Facebook page, Pancake, who is 55, describes himself as a “child of the one true king” and “unashamedly a Christian first.” (Levi, his and his wife Heather’s oldest son, is a pastor.) On bobbypancake.com, he turns philosopher, posting thoughts labeled “musings,” “ramblings” and “Pancakeisms.” He also blogs on entrepreneurship.

A recent post suggested “Be the buffalo” (a reference to the iconic American animal, not tasty wings) and explained how buffalo head into storms, rather than run from them, which shortens how long they suffer in bad weather. People should do the same, he says: “Face challenges straight-on with courage and fortitude [that] will ultimately lessen the significance and effects.”

He’s a regular on Facebook, offering this post on July 26, the first anniversary of Limestone BBQ: “You build on failure. You use it as a stepping stone. Close the door on the past. You don’t try to forget the mistakes, but you don’t dwell on it. You don’t let it have any of your energy, or any of your time, or any of your space.” (This comes from a 1993 American Academy of Achievement interview with singer Johnny Cash.)

Positivity pervades both his professional and personal life. This adage from painter Herm Albright is part of his email signature: “A positive attitude may not solve all your problems, but it will annoy enough people to make it worth the effort.” And this quote from the Bible is on his business card: “For what will it profit a person if they gain the whole world, and lose their soul?”

Pancake doesn’t count his hours working because he loves the work so much. “It hasn’t been work for the last 25 years,” he says.

That love rubs off on employees like Mike Henretty, a Limestone BBQ shift leader whose name tag reads, “vice president of fun.” “We’re all kind of vice presidents of fun,” he explains.

“You have to be nutty to work in this business,” says Pancake. “You’re working holidays and weekends when people are off. That makes it a difficult balance to have a family life.” 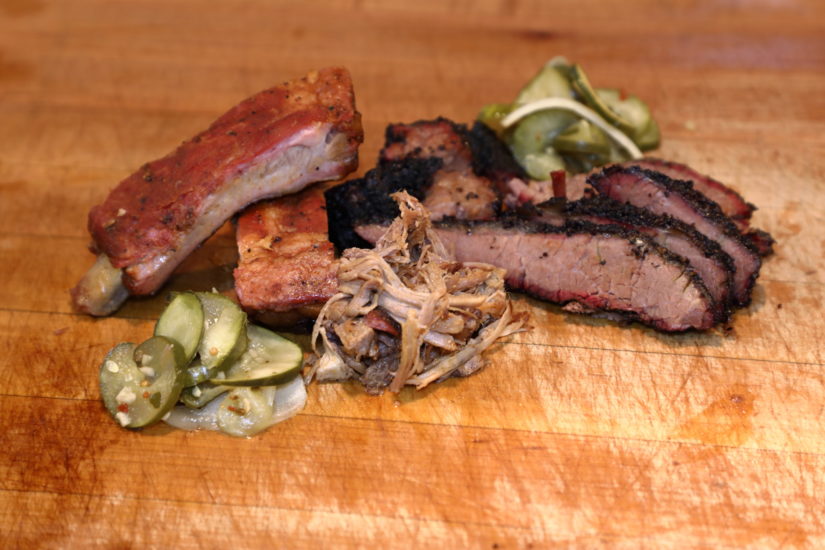 So What About The Food?

“We have fun, interesting, casual concepts,” Pancake says. “The food restaurant people like to eat.”

High 5 Hospitality’s franchises, of course, follow franchise standards, such as 22 sauces for the wings at Buffalo Wild Wings —but with enhancements. Athletes are often invited, fitting for a place that markets itself as a “model of a suburban, family-oriented sports bar and grill.”

At Eggspectation, High 5’s leaders are already thinking of regional specials, such as scrapple (dredged and fried or cooked slowly and cut thinly, suggests Jester, who favors it with ketchup and maple syrup) and oyster fritters (a lemon, garlic and butter sauce would be nice, he says).

The Stone Balloon Ale House and Limestone BBQ and Bourbon succeed with clear visions, with items “competitively priced and in tune with what’s trendy,” Pancake says. Both have event rooms and support ordering via EatStreet (as do several Buffalo Wild Wings locations).

The Stone Balloon Ale House is “a true homage to the Stone Balloon of the ’70s and ’80s,” Pancake says. “Our clientele is everyone who went there then. They need a cool place to drink up that nostalgia.” Although it’s on the University of Delaware campus, the prices and food skew older. The menu, which High 5 describes as “comfort food playfully reimagined,” features dishes like beef and bacon lollipops, hot wing chowder and beef stroganoff (no mushrooms, as a bow to how Pancake’s mom made it).

The Balloon is a rare restaurant with an off-premises liquor license, meaning customers who enjoy a glass of anything can buy a bottle, such as Limestone BBQ Maker’s Mark and Knob Creek bourbon.

Jester and his recipes starred in a recent “as seen on TV” demonstration dinner at the Balloon. Jester, who has appeared four times on the Food Network, has both won and lost on Guy’s Grocery Games, and he won on Beat Bobby Flay with shrimp scampi ($21 at the Balloon; the secret’s in the hand-rolled cavatelli). His awards include being named best chef in upstate Delaware for the last three years in Delaware Today.

If High 5 adds another, roomier Balloon, Pancake has comforting dishes in mind, including a spaghetti sandwich (fluffy white bread, margarine, a little spaghetti and as much meat sauce as possible, rolled like a taco) and Amish-style cinnamon buns, with all their gooey goodness. And he would love to bring back the glass of bacon, featuring twice-cooked bacon, encrusted in peppercorns and honey. “It’s like a high five for your mouth,” he says. It was also, he says, “cost-prohibitive.”

The food part of Limestone BBQ and Bourbon is an homage to Franklin Barbecue in Austin, Texas, which Pancake and Jester sampled in a research trip through Texas. They say the wait—Jester got in line at 8:30 a.m., and they didn’t eat until 1:40 p.m.—was worth it. “It was absolutely the best meal in my life,” Pancake says .

Limestone’s menu is short: seven meats from the smoker, seven sides, four sauces, four desserts, chili, house-made pickles and drinks. Some days, some dishes run out, which is part of the barbecue cult. So is the rustic look, the aromatic atmosphere and the cafeteria-style service. And there’s family-friendly music every Friday and Saturday.

The bourbon part necessitated more research trips, this time to Kentucky, and the result is 42 types of bourbon, plus a strong showing of cordials and ryes, served in a speakeasy environment. One rarity: 23-year-old Pappy Van Winkle bourbon, $70 for a 1.5-ounce pour. Another: hand-cut ice cubes.

And here’s a secret at the Stone Balloon: Diners are increasingly redefining the TV-triumphant shrimp scampi with their own off-menu twists by asking for it to be topped with crab cakes, salmon and even steak, Jester says.

Short Order On The Rise

The Devil is in the Details