Main Street is still important, but not for the reasons it used to be. Meanwhile, the university town has become a hub for the technology and health services industries.

Today’s Newark is not the one Nic DeCaire remembers from his teenage years.
“In high school, downtown Newark was where we went. We drove our cars down Main Street to show off on Friday and Saturday nights, playing loud music and looking for girls,” the 1998 graduate of St. Mark’s High School recalls.

“You don’t see that anymore downtown on Friday and Saturday nights,” says DeCaire, now the owner of Fusion Fitness on East Main Street. “You don’t see the traffic and the horseplay. You see more families, going to the restaurants.”

Just as DeCaire has grown up, so has Newark. Yes, it still has the bustle and energy of a college town from late August through May, with more than 7,000 of the University of Delaware’s 21,000-plus students living on campus and thousands more in off-campus housing. But it has morphed into a regional dining destination and, thanks in no small part to the university, a growing hub for the technology and health services industries.

“It’s alive. It’s very energetic,” adds Carl Georigi, owner of the Platinum Dining Group, who says it was an easy decision to open his fifth restaurant, Taverna, on Main Street in November 2012.

Within its 9.3 square miles extending south to I-95 and nudging the Maryland state line on the west, Newark offers a mix of city and suburban housing, an extensive park system, and dining and retail options to suit most any taste.

But, make no mistake, Main Street continues to be both the city’s heart and its backbone.
“Main Street is an integral part of this community,” says Maureen Feeney Roser, the city’s planning director. “It’s not just where we go to shop and dine; it’s where we go to celebrate.”

And the city is not resting on its laurels.

“That’s one of the challenges, once you become successful,” Roser says. “You have to make sure you’re meeting the needs of the community.”

There aren’t many Main Streets left like the one in Newark, nearly a mile and a half of continuous activity between Library Avenue and the Deer Park, and close to two miles if you count the stretch of Elkton Road that three years ago was renamed South Main Street.
Keeping the street vibrant is one of the tasks of the Downtown Newark Partnership (DNP), an organization of more than 300 businesses (who pay a special assessment with their annual business licenses), the city government and the university.

Helping to maintain that vibrancy is a series of events that continue throughout the year: parades to celebrate Memorial Day and Halloween; Restaurant Week in January; Wine and Dine Downtown in April; outdoor concerts in the spring; A New Night Downtown in June; the Food and Brew Festival in July; the Taste of Newark festival in September, and a winter festival in December.

Nor is there any shortage of options on the retail front.

The occupancy rate for downtown commercial space tops 95 percent, rents range between $25 and $35 per square foot, and national brands are increasingly looking at Newark as a business location, says Ricky Nietubicz, city planner and DNP administrator.

“Newark people support Newark businesses…I rarely eat outside of Newark. Anytime I can spend money downtown, I like to keep the money here.”

A town for small businesses

But the situation isn’t perfect. “Some people say you can’t buy a pair of women’s shoes on Main Street,” Roser says.

“Newark has always been known as a small-business entrepreneur town,” DeCaire says, pointing to his business, the boutiques and locally owned restaurants like Home Grown Café and Caffé Gelato as examples.

But, he says, with national brands seeking a foothold downtown, landlords are capitalizing on Main Street’s popularity by raising rents, making it harder for local residents to open new businesses and for existing ones to stay.

“We do have to look at ways to incentivize the small retailer as we continue to work on the mix [of retail shops],” Roser says.

Even so, recent renovations have given the venerable Newark Shopping Center a fresh look and some new faces, including Newark Natural Foods, a downtown icon for 40 years. A 200-unit apartment building is under construction on the former site of the Blue Hen Lanes on the east side of the shopping center and the operator of Westown Movies in Middletown is making plans to spend about $3 million to transform the vacant Newark Cinema Center into a five-screen complex to be called Main Street Movies 5. A Brazilian steakhouse is also slated for the shopping center.

To DeCaire, the camaraderie among business owners and residents is one of the best reasons to have a location in the city. “Newark people support Newark businesses,” he says. “I rarely eat outside of Newark. Anytime I can spend money downtown, I like to keep the money here.”

Not only is that relationship personal—“I can pretty much call any business owner here on their cell phone any time of day,” he says—but it extends into fundraising for community projects, like the police department’s K9 unit.

While businesses get along well with each other, they have long clashed with City Hall on a topic key to their prosperity – parking. The city has 763 spaces in downtown lots and another 426 on-street meters, but many business owners—and their customers—believe there aren’t enough spaces to go around. The city has expanded the number of spaces available in the past few years but may have reached its limit. “We’ve done almost all we can with the available inventory,” Roser says. 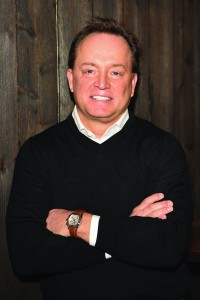 “We all have frustrated customers who say they spent a considerable amount of time looking for a place to park, but people who really want to eat at Taverna will find a place,” Georigi says.

Bill Sullivan, managing director of the Courtyard by Marriott hotel on the university’s Laird Campus, has a solution—a free shuttle service that delivers patrons to the restaurant of their choice and picks them up when they’re done. No drinking and driving problems here.
Those visiting downtown will benefit from changes: meters now accept credit cards, so shoppers and diners don’t have to worry about being ticketed for the lack of a quarter, and the city’s parking enforcement officers have  been redubbed “ambassadors,” and coached to steer motorists to available parking areas before slapping a ticket on the windshield, Roser says.

University of Delaware students are of course a significant influence on Main Street businesses for nine months of the year, and the university’s new STAR (Science, Technology and Advanced Research) Campus, built on the site of the former Chrysler assembly plant on South College Avenue, is already showing the potential to become a major economic engine for the city.

The STAR Campus, in addition to housing the university’s Health Sciences Complex of clinics for UD employees and the general public, is home to Bloom Energy’s East Coast fuel cell manufacturing center, the SevOne digital infrastructure monitoring business, and a series of health-related entities, including Independence Prosthetics and a branch of the Glasgow Medical Aid Unit. Delle Donne & Associates, the site developer, is expected to begin construction this year of a 10-story tower that will host high-tech information technology, engineering and wellness businesses as well as a residential area for employees of companies located on the campus. 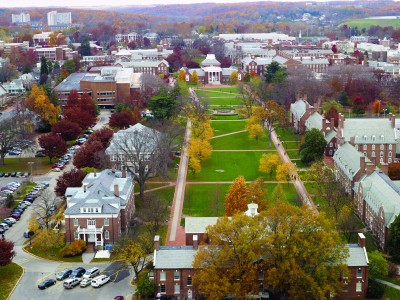 The UD campus accommodates more than 7,000 of the 21,000 plus enrollment (Photo courtesy of the University of Delaware)

The Chrysler plant, before its demise, generated about $377,000 in property tax revenues for the city, according to Newark Communications Manager Kelly M. Bachman. Taxable development at the STAR site plus the university’s margin on electric utility sales (which was not provided to Chrysler) now total about $175,000, with additional revenue anticipated as development of private-sector enterprise at the campus continues, she said.

“We’re staying engaged with the university,” says City Manager Carol Houck. “Their buildout time may be as long as 50 years,” and uses not now envisioned are possible in the future, she says. “Is it going to be more commercial? More educational? More leased space? Will it be a cityscape or remain a campus?”

Houck notes that relationships with the university have generally been positive during her nearly four years as city manager. As an example, she points to the university making its Trabant Center parking garage available to city residents so they could get their cars off the streets during the January blizzard. “They’ve done that for the last three years,” she says.

The STAR campus, Nietubicz adds, is not the only hub for economic development in the city. “Our industrial space doesn’t get the credit it deserves,” he says, citing Dow Chemical’s electronic materials site, a GE Aviation plant that is developing composite turbine blades and a Solvay facility that manufactures a thin composite used in smart phones.

There is available space in Newark’s industrial parks, and all have good access to I-95 and rail freight lines, he says.

Newark’s business environment is definitely healthy, Sullivan says, noting that about half the Courtyard by Marriott’s trade is corporate-related, with many guests doing business with DuPont, AstraZeneca, Bloom Energy, SevOne, W.L. Gore, JPMorgan Chase and other banks in the area.

Adding to Newark’s appeal is a comprehensive system of 33 parks (including two skate parks) and 15 miles of trails. “For a city of our size, it’s almost unheard of to have the park acreage that we’re maintaining,” Houck says.

“With our neighborhood park system, everyone is close to one, and they’re well connected through off-street trails,” Nietubicz says. “If one park is crowded, it’s just a 5- to 10-minute walk to get to the next one.”

A new venture offers the promise of broadening park access while demonstrating the cohesiveness of the community. DeCaire is working with the city to build an adaptive playground for special needs children at the Newark Reservoir. He hopes to raise $350,000 to $400,000 and have the playground open by the end of the year.

The facility, to be called Preston’s Playground, after Preston Buenaga, a 17-year-old who has mitochondrial disease, a condition that causes muscle weakness and developmental delays, will have a rubberized surface that makes it totally accessible to children who use wheelchairs or walkers. The play area will include equipment that permits special-needs and typical children to easily play together, DeCaire says.

DeCaire has also been talking with the staff at GoBabyGo!, the University of Delaware program that modifies toy ride-on cars for children with disabilities, about developing special harnesses for use at the playground by children who have difficulty walking.
Restaurants and other businesses are partnering with DeCaire on the fundraising.

“If I was in Prices Corner, I’d just be Fusion Fitness at Prices Corner, and I wouldn’t have the same impact,” he says.  “Being in Newark, I’m able to tap into all these resources, and we can work together.”