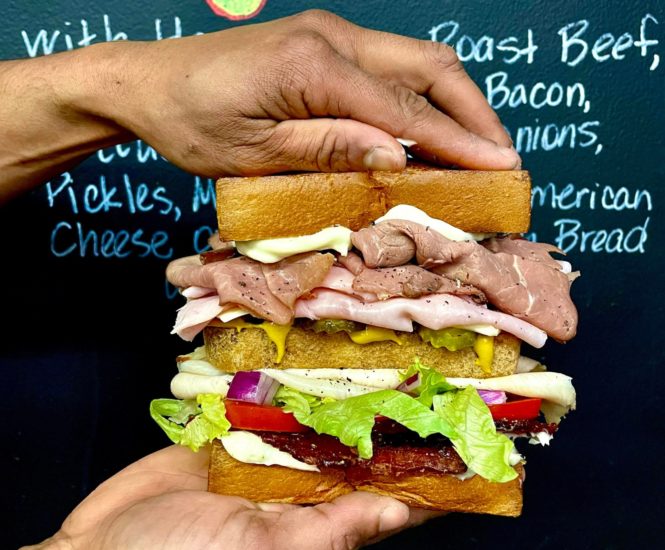 The 1.5 pound Dagwood at Gaudiello’s in Trolley Square, Wilmington.

Film buffs of a certain age will remember John Candy taking on “Paul Bunyan’s Blue Ox” steak in The Great Outdoors. If he finishes the 96-ounce piece of prime beef, the server says, the entire table eats for free. But that’s unlikely, given no one has ever succeeded, she notes.

The entire restaurant surrounds Candy, who develops meat sweats. His stomach gurgles in protest, and his fork quivers, but he gets it all down — even the gristle and fat.

Today, the “old’ 96er” would be known as “stunt food,” a menu item that can be colorful, fascinating, unique or, in this case, horrifying.

“Chefs are trying to create dishes that are highly Instagram-able,” says Delaware chef Hari Cameron, a consultant and contestant on Netflix’s Snack vs. Chef. “There’s an increased emphasis on visual impact — things that are shocking and wild.”

For the most part, stunt food was born in the fast-casual marketplace, which is under pressure to develop new, noteworthy products advertised during prime time hours. Take, for example, Taco Bell’s Doritos Locos Taco, a taco with Doritos chip-constructed shell. Customers were only too happy to drive home with orange fingertips. By piquing attention, these menu items bring customers to the restaurant.

While some customers are curious, others — such as Candy’s character in The Great Outdoors — want to accept the challenge. Sure, they’ll try a beer with scrapple (Dogfish Head Craft Brewery) or eat an egg sandwich on a fried donut (Dogfish Head Brewings & Eats.) They want to tell — and show — others about their daring palate.

But it’s not all a flash in the pan. Some, seemingly incongruous combinations do taste good. Halloumi cheese and cranberries on a burger is surprisingly tasty.

Burgers are an ideal platform for novelty approaches. For proof, attend the Delaware Burger Battle, where entrants vie for the tastiest and most creative takes. The patties are launchpads because they are approachable. “Everybody is familiar with a burger,” says Michael Day, owner of Farmer & the Cow in downtown Wilmington.

If customers don’t fancy their choice of toppings, they can take them off, which is why the meat must be exceptional. The flavor must stand up to whatever the chef perches on top of it. “We start with a good blend of beef, which creates a solid base,” Day agrees.

Farmer & the Cow is known for its inventive combinations. So much so, in fact, that it caught the attention of Diners, Drive-ins & Dives. Host Guy Fieri wolfed down “That’ll Do Pig,” which includes sweet bacon jam, thick-cut bacon and house-made bacon mayo — topped with tater tots. He also noshed on fried chicken skins.

“We literally just throw stuff together and hope it sticks — no joke,” says owner John Berl, who recently opened a restaurant to accompany his food truck business. “I just combine foods that I like or that pair well together and make it work.”

The Elvis — peanut butter, banana, bacon and honey — drew a line of customers to the food truck. Customers also liked the peach-bourbon-bacon burger and the pineapple-pulled pork-bacon-barbecue-and-jalapeno burgers. (Bacon is the operative word.) 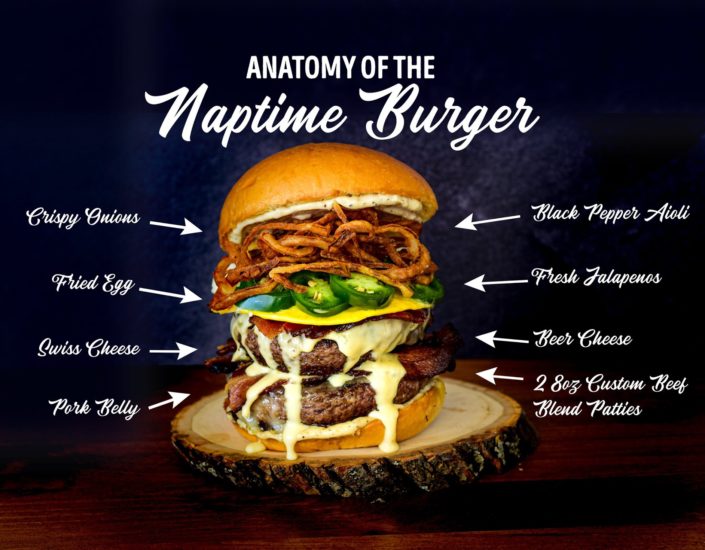 But one of the most shock-and-awe stunt burgers is the Naptime Burger at Thompson Island Brewing Company in Rehoboth. The restaurant created a diagram to show the ingredients: two 8-ounce patties, pork belly, beer cheese, Swiss cheese, fresh jalapenos, a fried egg, black pepper aioli and crispy onions.

Pizza is another familiar favorite that can become a stunt food. Granted, not many restaurants will go to the lengths of Pizza Hut, which has promoted a hot dog-stuffed pizza crust and a crust filled with grilled cheese — mozzarella and cheddar topped with breadcrumbs and soaked in butter.

But now that pineapple pizza no longer raises eyebrows, some establishments are getting extra creative with the toppings. Take, for example, the ziti pizza at Pizza Mariana in Newark, which is covered with pasta and a beef-and-pork sauce. Meanwhile, peach toppings bring attention to Nick’s Pizza, which Nick Vouras runs out of Kozy Korner in Wilmington’s Little Italy section. Ingredients also include ricotta, black pepper, honey, basil and a balsamic glaze.

“People take a doubletake: ‘What is that peaches, and it’s supposed to be good? Let me try it,’” he says. “People who initially think fruit on pizza is nasty change their minds when they have this.”

And forget the Bobbie. Pizza By Elizabeths is putting turkey, stuffing and cranberry aioli on a pizza crust this season.

Something to Talk About 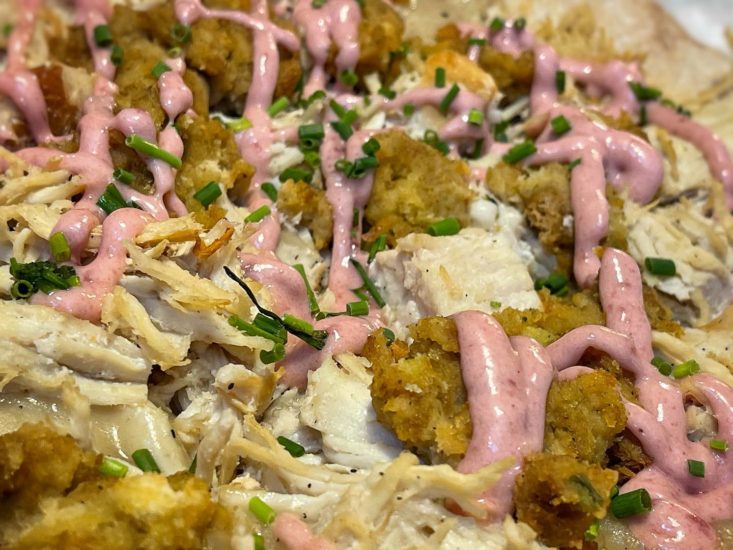 Pizza By Elizabeths is putting turkey, stuffing and cranberry aioli on a pizza crust.

To Huntley’s surprise, people regularly place an order with “no fanfare,” he says. “Normally, it’s: ‘Wow, that’s huge!’ followed by 12 minutes of aggressive chewing and an empty tray.”

If you like, you can drink your stunt food, whether it’s an overflowing milkshake or a Bloody Mary with a skewer of fried chicken, sliders or even a full-size hotdog.

Dinner and a Show

There’s a reason why wine and beer dinners typically include dishes that appear on Instagram the next day. Chefs use these events to let their imaginations run wild. But it’s not all about the beverages.

Klondike Kate’s Sleigh Bar promotion, which began last month, is next-level stunt fun. The restaurant is decked out in holiday finery, and the menu salutes the season. After eating a candy cane-shaped caprese salad and egg rolls stuffed with turkey, stuffing and cranberry — complete with dipping gravy — guests can take selfies in the sleigh.

Melissa Ferraro at Sonora in Newark has held Harry Potter dinners with Bertie Botts cocktail beans, and on Dec. 15, she will hold the Old Fezziwig dinner. (Monty Python gets a turn on Jan. 19.)

Event or menu item, stunt foods must achieve a goal, usually sales in some form. Gaudiello’s customers may come in for the Dagwood but get a cheesesteak instead. Either way, the cash registers ring.

If the items don’t deliver, they’re gone. Chelsea Tavern’s Dirty Burger is dust. The deep-fried patty was topped with fried scrapple, bacon, an egg, cheese and roasted pepper sauce. The sandwich drew a lot of press — and yours truly watched with awe as a friend ate one.

But as a regular menu item, it didn’t jibe with the diverse crowd that the Grand Opera House brings to the establishment.

“It gets attention, but it doesn’t sell,” says owner Joe Van Horn. “We’d sell maybe 12 a week. Now we do our novelty stuff when we do specials.”

But then again, he adds, if people are talking about it, then the chef or R&D group may feel the risk is worth it. After all, the Taco Bell Dorito taco was released in 2012. Twenty years later, we’re still talking about it.

Playing to the Crowd