Science, entrepreneurial spirit and circumstance combined to convert what was once a rare delicacy into a multi-billion-dollar industry

Take a moment and consider that, for the state of Pennsylvania and the Kennett Square area specifically, a  hefty percentage of the agricultural economy is based on a humble fungus.

Drive north from Wilmington into southeastern Pennsylvania and the presence of mushrooms as an industry is impossible to miss. Low cinderblock mushroom houses dot the landscape. Emanating from them is the unmistakable whiff of manure compost, which may be an objectionable livestock byproduct to passing motorists but is actually the smell of money.  And in Kennett Square, there are literal signs  announcing its prominence —one welcoming travelers to the borough touts its status as a major mushroom source, and the municipal water tower declares: “Mushroom Capital of the World.”

But what led Chester County, Pa., and Kennett Square specifically to rise to such heights in the food world? Considering that Pennsylvania has been an agricultural sweet spot since the native Leni Lenape population first tilled the earth thousands of years ago, it would seem unsurprising to attribute large-scale mushroom cultivation to their ingenuity. But the truth is the growth of commercially grown mushrooms as an American—and once uniquely Pennsylvanian—product is a much more recent development.

Mushrooms aren’t hard to find in nature. Under the right circumstances, many varieties sprout in fields or suburban yards after a heavy period of rain. But unlike many other food products that can be foraged, there are only about 1,000 edible varieties of wild mushroom. The rest—nearly 40,000 varieties—can cause illness, hallucinations and death. Knowing which mushrooms to pick from the wild was once the purview of root doctors, medicine men, herbalists and others with the specialized knowledge required to tell the tasty and medicinal from the deadly.

While humans had always eaten mushrooms in some form, their popularity as a food product exploded in the early 1800s in large part because of their scarcity. Before commercial cultivation of mushrooms, they were harvested primarily by foraging wild varieties from the forest floor, fallen logs or caves. But having to wait for the right conditions for mushrooms to appear—typically in spring, summer and autumn—and knowing the right spots for them to grow made them rare and relatively expensive.

Meanwhile, efforts in the 18th and early 19th centuries to cultivate mushrooms on a large scale were failures because transplanting wild species of edible mushrooms often brought with them contamination that prevented them from thriving under controlled conditions.

But by the mid-1800s, the Pasteur Institute in Paris developed a mushroom strain free of contaminants that was grown in the city’s labyrinth of sewers, thus domesticating the Agaricus bisporus, or the common white mushroom—the genetic basis for the white button mushroom we know today. The resulting spores and growth techniques were, before long, exported to England.

It Began with Carnations

But it was good old American capitalism that jumpstarted mushroom cultivation in the United States. In Kennett Square, florist William Swayne is largely credited with bringing the mushroom business to the region in 1885, according to the Mushroom Farmers of Pennsylvania, an advocacy group that represents the region’s mushroom growers. Swayne grew carnations, which require raised greenhouse beds to thrive. That left him with something any good entrepreneur loathes—untapped earning potential.

That void—between the floor of his Marshall Street greenhouses and the bottoms of his carnation beds—eventually led Swayne to theorize that the damp spaces would be perfect for mushrooms. He sent off to England for (the newly pasteurized) mushroom spores, then hung burlap curtains from the carnation beds to create mushroom-friendly areas that maintained an even temperature and humidity.

His experiment a success, Swayne moved to expand his mushroom cultivating capacity by building the first mushroom house. The design mimicked that of his initial growing experiment on a much larger scale. Rather than burlap-shrouded rows, these new buildings were low and windowless to take advantage of the dark, as well as the cool ambient temperatures of the ground during the Pennsylvania fall, winter and spring. Unlike other regional crops like corn, wheat, barley and rye, they required minimal acreage. The ideal mushroom growth medium—vegetative compost mixed with manure—could be created from straw and hay plus manure from livestock, all readily available from nearby farms. 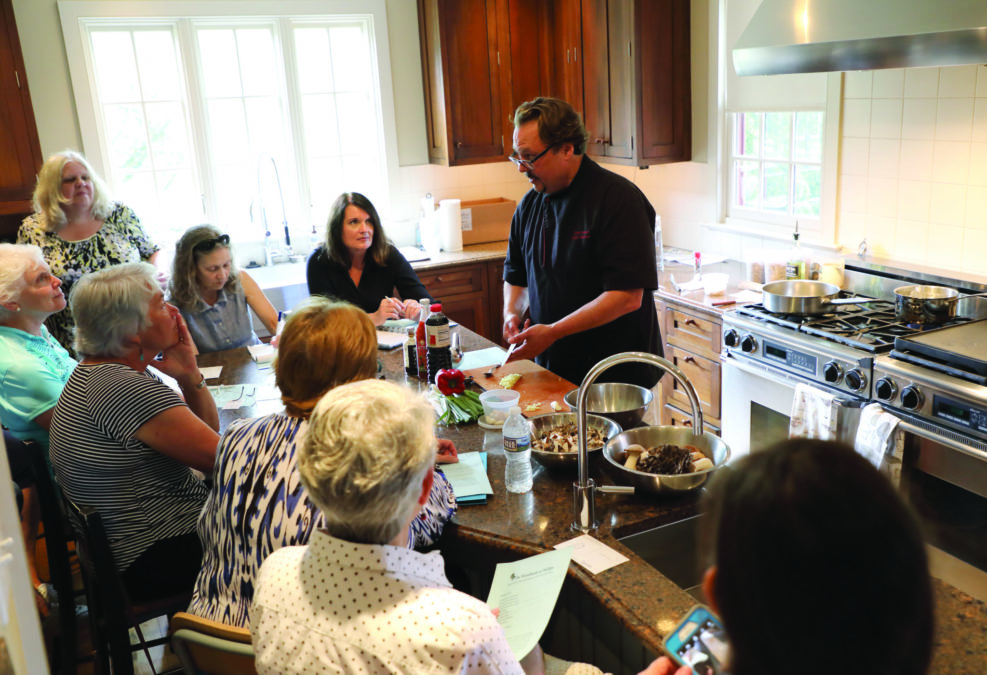 What began as a hobby grew into a business when his son, J. Bancroft Swayne, returned from college. The younger Swayne immediately realized the potential for the business and is credited with creating the first commercially successful grow houses, eventually adding spawn houses and a cannery to the operation.

Other farmers in the region saw what the Swaynes were up to and, by the 1920s, figured they’d get in on the action. Kennett Square’s geography and the existing infrastructure helped fuel the boom, and a rail line that ran through Avondale provided easy access to influential markets like New York City, Philadelphia and Washington, D.C., making mushroom cultivation more attractive.

Also, national tastes had grown to embrace the mushroom in cooking, with canning technology making them available year-round not just to chefs but to the home cook.

One of those operations was Phillips Mushroom Farms, which started in 1927 with William W. Phillips’ small operation, says Angelucci. Phillips later used ice to cool his mushroom houses, allowing for the first summer growing seasons.

According to a 1931 story in West Chester’s Daily Local News, by 1930 there were more than 500 mushroom houses scattered throughout Kennett Square and townships within a 10-mile radius of the borough. They were responsible for 85 percent of all U.S. mushroom production.

Over the decades, mushrooms have become a foundation of Pennsylvania agriculture, today providing 69 percent of the nation’s mushrooms and contributing $2.7 billion to the state’s economy, according to statistics from the Mushroom Farmers of Pennsylvania. And though turnover and consolidation has whittled the number of growing operations down to 68, the industry still employs 10,000 people throughout the region.

An Eye to Variety

For decades, through rapid growth, competition from European growers, and bans on the use of tin during World War II that affected canning operations, the focus of the Kennett Square mushroom industry was almost exclusively on the white “snowball” mushroom—perfectly proportioned and clean in appearance.

And while today the variety still reigns as king, the rise of foodie culture has fueled a staggering growth in the exotic varieties of mushrooms grown by Kennett Square operations. In fact, if you enjoy readily available shitake and Portobello mushrooms, you pretty much have Phillips to thank for their presence on your grocery shelves. That’s the result of a revolutionary growth process that shrunk the shitake harvest time from four-to-six years to four months. When Phillips began growing Portobellos, there was zero market for the wide-capped, meaty-tasting variety.

“We literally gave them away from Maine to Miami to get them started,” Angelucci says. “But when they took off, we were the only guys growing them.”

The exotic mushroom business got to be so good for Phillips that in 1989 the company discontinued production of white mushrooms altogether, resuming 10 years later with the construction of massive white mushroom houses in Warwick, Md., just over the state line from Middletown, Del.

Mushrooms are also benefitting from two national trends: healthier eating and high beef costs. Veggie burgers are largely made up of mushrooms, and there’s been significant interest in incorporating more mushrooms into meat products to add flavor and offset the cost of beef for things like burgers and meatballs, says Peter Wilder, marketing director of To-Jo Mushrooms in Avondale, Pa.

“Taste tests have shown that 50-50 tacos [half beef and half mushrooms] are preferred over pure-beef tacos,” Wilder says. “That blend helps lower costs and can add flavor for food service products and items coming up into fast casual restaurants. Food service will get these food trends started and the whole industry will see a rise in sales.”

All of which provides more opportunities for the humble—yet world-famous—Chester County mushroom to spawn even greater success for the region.

Since April 2011, The Woodlands has sold fresh, dried, jarred and specialty mushrooms. Order mushrooms online for pickup, too, at thewoodlandsatphillips.com.

The shop offers products and all the mushroom memorabilia one could ever dream of, including towels, books, ceramics and more.

During a free self-guided tour, the crowd-favorite Mushroom Exhibit delves into everything there is to know about our favorite fungus—the growing process, health and dietary benefits and medicinal uses of mushrooms. Here, guests also can learn more about the longstanding Phillips family.

Cooking demonstrations also are available, along with classes and talks. Here’s a list of September events:

A kickoff to the 33rd annual Mushroom Festival with a cooking demonstration, led by Chef Kurt Jacobson.

Two for the Show

Healthy Drinking: Not an Oxymoron