You won’t be able to see many stars, mainly because of the light shining through the windows of the tavern across the street. And you won’t hear the hooting and chirping of night birds, either, because the most dominant sound will be the rumbling of car tires on the nearby highway overpass.

So it doesn’t sound like an ideal place to go camping. But in a way, it’s the perfect place.

For the third consecutive year, Harvey, Hanna & Associates, a Newport-based real estate development company, will sponsor Camping Out for Coats, a fundraiser to purchase winter coats for needy kids in Newport and Wilmington.

This year’s event will take place on Friday, Nov. 8. Patrons make a donation and then camp out on an empty grass field across the street from the James Street Tavern in Newport—while that rumbling overhead emanates from Route 141 as it makes its way through town.

The event had its genesis in 2017 when Ryan Kennedy of Harvey, Hanna & Associates visited Richey Elementary School in Newport to deliver some iPads the company was donating to special needs students at the school. As Kennedy was given a tour of the school by then-principal Dorothy Johnson, he felt the need to do more.

“I was disappointed [that] I didn’t even know about the school even though I had been working in Newport for 10 years,” Kennedy says. “And the last thing [Johnson] said to me was that over 65 percent of kids at that school lived at or below the poverty line, which was astonishing to us.”

“We went through a series of emotions,” he adds, “and we felt that was unacceptable. And from that moment, we started paying close attention to the needs of local children.”

Kennedy met with his boss, Thomas Hanna, who had created the Delaware Kids Fund to help needy children in Delaware, and it was Hanna who suggested the camping fundraiser to furnish winter coats for students.

“We wanted to raise money and we wanted to raise awareness,” Kennedy says. “And we didn’t want to host a 5K or a beef-and-beer or some other run-of-the-mill fundraiser. We wanted to do something a little more grassroots that would really draw attention to the topic. And that’s when he came up with the idea of camping out and making it a real community event in the heart of Newport. And the rest is history.”

Not to mention geography. Hanna and Kennedy and the rest of the support staff realized that camping out in Newport on a chilly November night might be a tough sell, so they were pleasantly pleased at the response. The first year, they were able to supply 1,600 coats for three schools. Last year, they handed out more than 2,200 to other local elementary schools, including Richardson Park, Albert Palmer, Pulaski and Warner.

Jaclyn Durant, a transplanted New Yorker, has been a social worker with the State of Delaware for 20 years and for the last 16 she’s been stationed at Richey Elementary. She’s worked closely with Hanna and Kennedy on the fundraiser and has been impressed with the commitment from the company and the community.

“I really believe in the power of community, and to have the community reach out to us and help with our children is really uplifting,” Durant says. “It shows what can happen when people really care and are willing to think of the greater good. That’s really what community is all about and Ryan and all the people at Harvey, Hanna & Associates have made a real difference in the lives of a lot of children and their families.”

And everyone in the school gets a coat, whether they can afford a new jacket or not. That works on two important levels for impressionable kids—none of the them feels left out and none of them feels singled out. 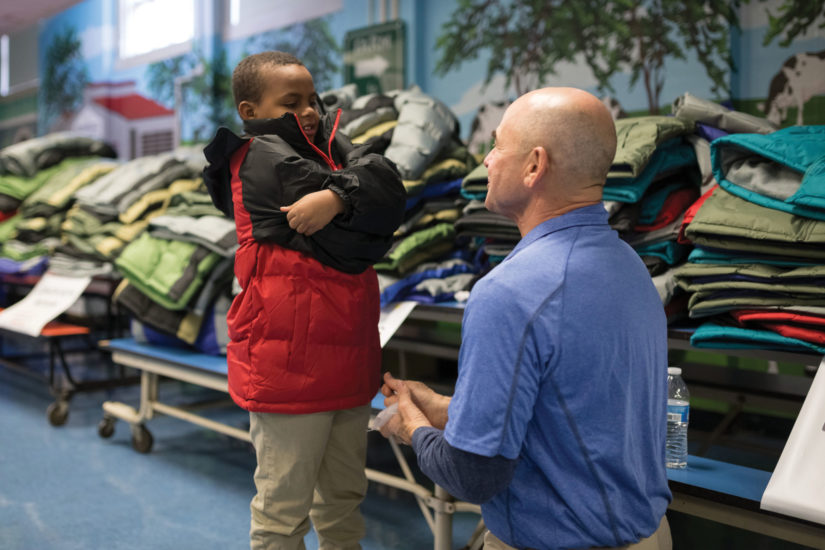 Durant says it’s almost like a big birthday party when the coats arrive at the school. The children get to pick out their own coats according to size and color, even though the shy ones sometimes need a little help. And Durant says she still remembers the first time they handed out the coats and the reaction of the students when they got them.

“It was absolutely an amazing event,” Durant says. “People from the school and the [school] district and the community were here together just to see the children pick out their coats. And the children were so excited. They’d pick one out and run over to show one of their teachers and say ‘Look at my coat! I like the color! I love my new coat!’”

“Frankly, it hit me like a ton of bricks,” Kennedy says. “I didn’t anticipate how emotional it would be when you meet those kids and see the joy in their faces.”

Durant agrees that it was the looks on the children’s faces that had the biggest impact on her and everyone else on hand.

Tears in Her Eyes

“At the end of the day I had tears in my eyes,” she says. “It was such a rewarding experience and just a special, special day for the school, the community and especially the kids.”

There are plenty of fun activities scheduled for the event, including yard games, bonfire sing-a-longs with guitar accompaniment and, of course, s’mores. And there is plenty of security supplied by the Newport Police Department.

Basic amenities are provided, including campout-style meals (hamburgers and hot dogs at night, pancakes in the morning, as well as other snacks) and, of course, bathrooms. As for other comforts, campers should bring common-sense things—blankets, sleeping bags, tents (which will be provided if you don’t have one) and flashlights.

And because of the traffic, there is one more item the organizers suggest campers put in their backpacks—ear plugs.

For more information on the camping fundraiser, contact Ryan Kennedy at 323-9300 (ext. 117), or at rkennedy@harveyhanna.com.

Kevin Noonan
Kevin Noonan has written about Delaware and Delawareans for 40 years. He and his wife, Suzi, live in Arden and they're the parents of two grown children and the grandparents of two little angels. He has no interesting hobbies to speak of, but is generally recognized as one of the finest air guitarists in the country.
Previous