While honoring its legacy with ‘Whist-ory’ tours, University and Whist Club attempts to attract more millenials

Not that long ago, folks living near the top of the hill on Wilmington’s west side referred to the neighborhood as “Federal Hill,” based on the legend that George Washington himself had once considered the area as a possible location for the nation’s capital. Supposedly, the proposition was offered by Dr. James Tilton (1745-1822), the Delaware native who would purchase that same hilltop property from Quaker silversmith Bancroft Woodcock in 1792.

Located at the corner of Broom Street at Ninth, the mansion is a 20,000-square-foot stone fortress—complete with a lookout tower—tucked behind a five-foot stone wall topped with six more feet of manicured privacy hedges. There’s a carriage house on the corner and a parking lot in the back, and a private drive that winds through the shade of ancient oak trees. 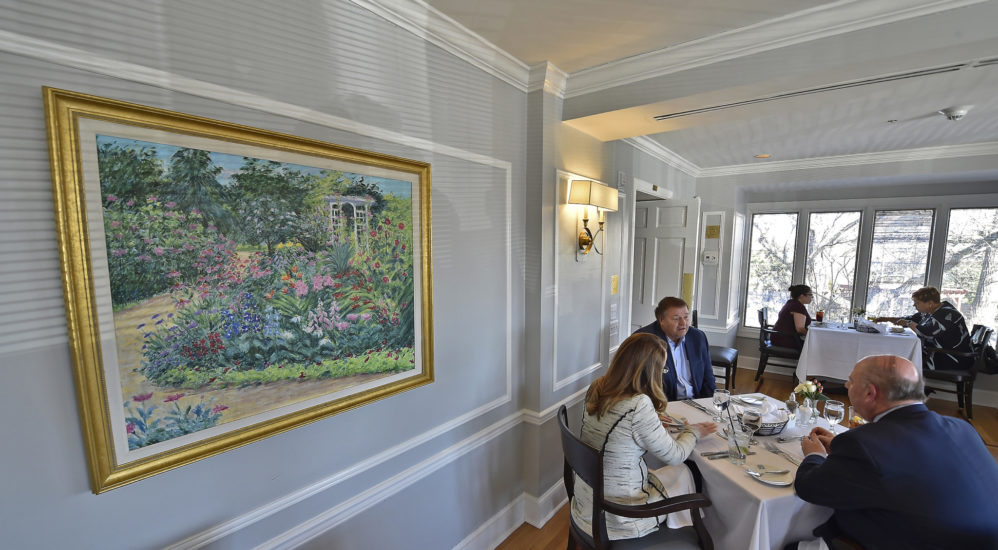 The Club menu retains some of the old classics while also including international influences for younger members. Photo Butch Comegys

This is where the members-only University and Whist Club of Wilmington, a private dining club, has been catering to a well-to-do clientele since 1935. The grounds are picturesque, ideal for a photo shoot. Inside, the entryway leads to a grand staircase flanked by ornate fireplaces. Beyond are three formal dining rooms, a less-formal bar and enclosed terrace, and a banquet space for weddings and other large events.

Back in 2014—the year Kim Kardashian and Kanye West attended a wedding at the Whist—the building was falling into disrepair. Like other private clubs across the country, membership had been in decline for decades. In 2016, John Hynansky and Thomas Hatzis, both owners of car dealerships and long-time members of the club, bought the estate. So far, Hynansky and Hatzis have invested nearly $4 million into renovations—upgrading the kitchen, installing new plumbing and electrical systems, and adding an 850-square-foot dining room, the Tilton Terrace, which features floor-to-ceiling sliding windows that are opened on pleasant days.

On an afternoon when “Delabear” was taking up residence in a Trolley Square backyard, the staff at the University and Whist Club were preparing history tours and gourmet lunch for 40. Due to popular demand, there were two tour groups that day instead of the typical one. When the first group sat down for their meal, the other started exploring the estate.

Much of what we know about the Tilton Mansion and its first resident has been pieced together from documents scattered in archives across the region. The club’s vice president of marketing as well as its resident historian, Stacey Inglis, spent years sleuthing in special collections libraries, tracking down every scrap of paper documenting the storied life of Dr. James Tilton—field surgeon in the Revolutionary War, delegate in the Continental Congress from 1783 to 1785, first Surgeon General of the United States Army–appointed during the War of 1812–and first president of the Medical Society of Delaware.

The second and third floors of the mansion are a museum exhibit of Tilton’s life, with documents, images and artifacts in cases and framed on the walls. Inglis even tracked down his original diploma from the medical school at the College of Philadelphia, now the University of Pennsylvania, where Tilton earned his Doctor of Medicine in 1771.

He joined the rebellion in 1775, enlisting as a surgeon in the First Delaware Regiment. In addition to operating on the wounded, Tilton was a brilliant physician who developed an advanced understanding of infectious disease many decades before the discovery of bacteria. He redesigned the army’s field hospitals and implemented quarantine methods to prevent transmission of contagious disease, a decision that likely saved the Continental Army after an outbreak of typhus and dysentery during the winter of 1777.

Latisha Bridges, a server at the University and Whist Club of Wilmington, strikes a pose on the stairs at the front entrance of the club located on Broom Street. Photo Butch Comegys

Throughout the tour, Inglis interjects asides about her own research into Tilton’s life. She recalls an afternoon in the archives of the Delaware Historical Society on Market Street. Along with Mark Meister, former executive director of the Medical Society of Delaware who has since retired, the two were granted access to Tilton’s letters, secured in a vault and rarely removed for public view.

“We were like two kids on Christmas morning,” says Inglis. “I was literally holding a letter from Alexander Hamilton” that appointed Tilton as Delaware’s commissioner of loans for the newly established Treasury Department. They also discovered correspondence with Thomas Jefferson and Caesar Rodney.

“George Washington had an office on Market Street” as he awaited the British assault that would become known as the Battle of the Brandywine, says Inglis. Thousands of soldiers were encamped around the city, including on the hilltop that would become Tilton’s home.

“Everything about this house and Dr. Tilton not only are part of Delaware’s history but are part of our nation’s history,” Inglis continues.

In 1802—the same year E.I. du Pont started manufacturing gunpowder at Hagley—Tilton began construction of the original two-story home where he would live for the remainder of his life as both a public servant and professional physician.

In the basement is the stone slab upon which the surgeon conducted his business. He once even operated on himself, sort of. As?Delaware Today reported in 2017, “In 1815, at age 70, Tilton would have his left leg amputated at the hip–without anesthetics. He advised the surgeons during the operation.”

Following Tilton’s death in 1822, the original house was renovated and expanded by industrialist Charles Howland, Delaware’s sixth lieutenant governor, Danforth Bush, and finally Francis V. du Pont, Jr., who saved the property from a real estate developer seeking to demolish the mansion to build row homes. In 1935, du Pont leased the property to the University Club of Wilmington, which purchased it in 1937 and merged with the Whist Club in 1958.

As interesting as these stories are, however, historical recovery is also a marketing tool that has become increasingly popular in recent years. Dining at the Tilton Mansion, in its own small way, supports the preservation of local history, just like drinking a beer at Stitch House Brewery or attending a show at The Queen. Supporting a cause makes people feel good.

The goal, says Inglis, “is to establish roots in the building’s history—securing its future with the use of its past.”

And they’re trying to make that history as visible as possible. Since the sale of the estate in 2016, the mansion is now an asset of The Tilton Mansion Preservation Society. The Delaware Public Archives officially recognized the site with a historical marker in 2017.

All promotional materials now refer to the Tilton Mansion as “home to the University and Whist Club,” which rents the space and fulfills its separate mission as a private fine dining club. 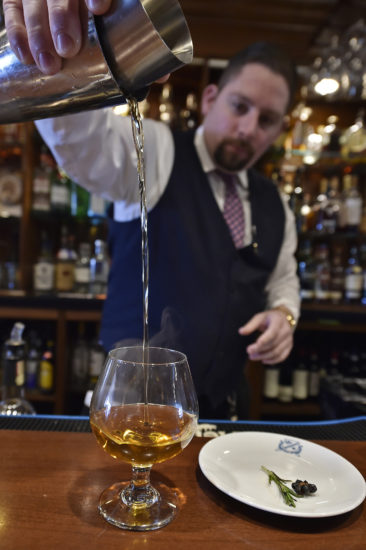 Although the club remains an exclusive enclave for Wilmington’s well-to-do, it has taken steps to make membership more appealing. Dues are now calculated on a sliding scale, beginning under $1,000, not including the $750 initiation fee and $900 annual minimum on food and beverage purchases. In addition to the traditional fine dining experience, there are special events like Wine University and Colonial Tea.

Menus have also been updated. “We change the menu seasonally, keeping some old classics for our members but then also include different international influences for younger members,” says General Manager Michael Crispin. “So we try to maintain that balance.”

Would the beef short rib tacos have been on the menu five years ago?

“Probably not,” Crispin says. “This isn’t the old stuffy club it was when your grandparents were members.”

While Delabear was busy outwitting multiple government agencies, my tour group sat down for lunch. Burgers and crab cakes were popular, as was the Caesar salad, delivered in a parmesan cheese bowl.

Some in the group had their own stories to share about the mansion, like Gerald Shields, who had never seen the inside of the mansion even though his mother used to wait tables here in the 1960s. Everyone seemed to enjoy his or her meal, as well as the conversation. But when asked if they would consider joining the club, many of my fellow diners respectfully declined to answer.

“Would it be nice if some of our ‘Whist-ory’ fans joined the club after a great experience? Of course, but that is not what the tours were intended for when we created them,” says Inglis. “Our history tours have hit a nerve. History buffs and longtime Delawareans have responded so positively to the opportunity to take a glimpse inside the mansion and behind the stone walls, which are normally off limits to non-members.” 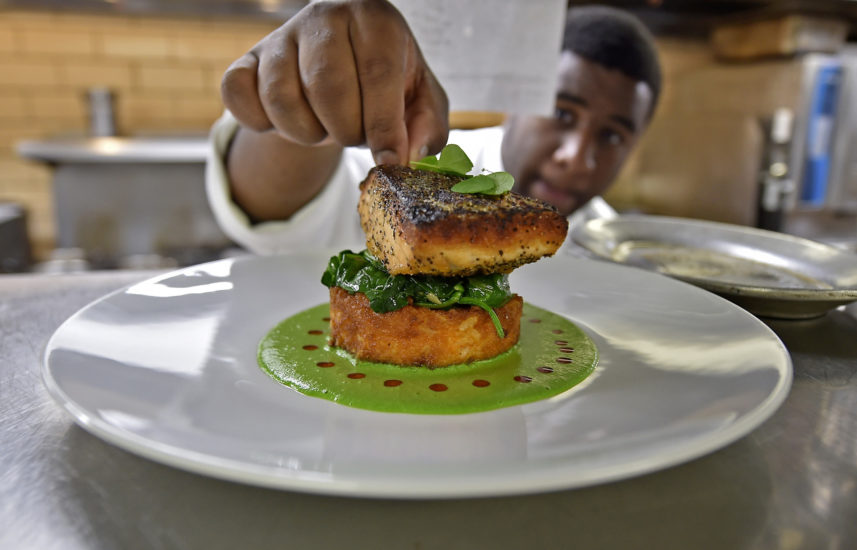 A king salmon entree is ready to serve for lunch at the University and Whist Club. Photo Butch Comegys

By the end of lunch, as my fellow diners were walking full and happy to their cars—and just as Delabear had escaped, narrowly avoiding a speeding freight train and disappearing into the woods along the Brandywine—bar manager and mixologist Brian Burnett was demonstrating mixological sciences with the creation of the Tilton Saz—a Sazerac-inspired beverage with a smooth citrus finish. Burnett spritzes some sprigs of rosemary with citron extract and sets them on fire, allowing the sprigs to burn only briefly before setting a glass on top to extinguish the flame. The smoke coats the inside of the glass, laying the foundation for the drink’s unique lemon-rosemary twist.

With the smoke contained, Burnett mixes rye brandy, citrus-orange bitters, honey liqueur and Benedictine over ice and rolls the concoction around in a cocktail shaker. The final ingredient to this witch’s brew is a single spritz of Chartreuse. He then strains the mixture into a glass, and the creation ritual is over.

Time to raise a glass to the updated University and Whist Club.