Mark Shafer, new executive director of the Delaware Zoological Society, faces the challenges of operating—and expanding—facilities during a pandemic

Mark Shafer is no stranger to hard work. Maybe that’s why it proved difficult for him to embrace retirement.

Shafer made his bones during more than a decade in the high-pressure world of New York advertising agencies, where the seven-day work week was not uncommon. At one agency, Chiat/Day, he quickly learned the company maxim: “If you don’t work Saturday, don’t bother coming in on Sunday.” Says Shafer: “The typical day was 10 a.m. to 8 or 9, which is why it was known as Chiat Day and Night.”

He was young and single then, so he didn’t mind the long hours, and he had a passion for his work as an account manager. “Then I got engaged,” he says, “and decided I wanted to get outside New York and raise a family.”

Which brought the native of Greenwich, Conn., to Wilmington in 1993 to help expand MBNA’s in-house advertising agency. Shafer says he was “blown away” by the Charles Cawley-led banking behemoth and its Chiat/Day-like culture of dedicated workers who put in long hours.

He and his wife, Celia, settled in Greenville, and raised three children. Both accomplished tennis players, they joined the Greenville Country Club, where Shafer has twice captained a team that competed in the United States Tennis Association’s National Championships. 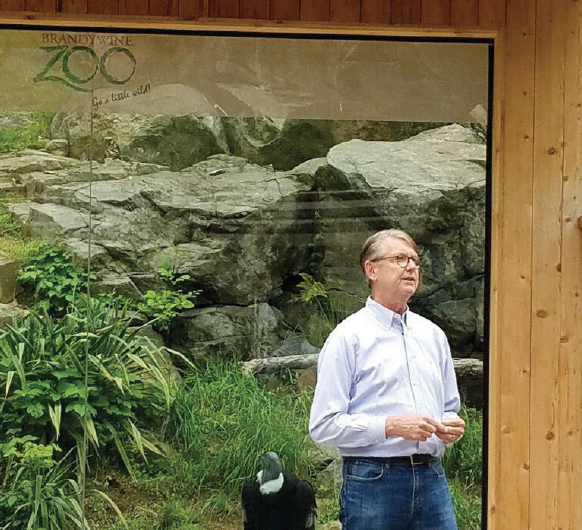 Mark Shafer, a former ad executive, has learned a lot about animals since being appointed the Zoo’s executive director in May. Photo courtesy of Brandywine Zoo.

In 2011, he was among the 3,000 employees laid off by MBNA/Bank of America, and he quickly moved on to other advertising/marketing positions, the last being director of marketing for the Risk Management Association, a Philadelphia-based, not-for-profit member association.

He left RMA last fall and tried semi-retirement. But it didn’t take. “I had some consulting irons in fire,” he says, “and I played a lot of tennis. But it got boring.”

Then, early this year, he was recruited to the board of the Delaware Zoological Society (DZS) by Board President Arlene Reppa, a friend from his MBNA days. DZS runs the business side of Wilmington’s Brandywine Zoo, which includes fundraising, memberships, admissions, marketing, advertising, website, Zootique, and snack bar. The Delaware Department of Natural Resources & Environmental Control is responsible for the care and management of the zoo’s land and animals.

Shafer was in the process of being vetted for the board when Mike Allen, the executive director of DZS, announced he was leaving to join the Queens Zoo in New York City. The job was posted on several sites, and Shafer saw it and applied.

He was chosen from what Reppa calls “an amazing amount of applications,” and took over as interim executive director in May.

“Mark has done an outstanding job,” says Reppa, “coming in at a really awkward time, when we were not functioning normally, with COVID having hit us. He had to jump in and learn a lot in a short time from the previous director.”

Shafer, who earned a degree in Marketing from the University of Connecticut and an MBA from Arizona State University, admits that his C.V. didn’t exactly indicate an extensive knowledge of animals. But wildlife expertise is not really a requirement of the job.

“I know a lot about marketing and advertising,” he says, adding that there is not a lot of difference between corporate marketing and marketing for a non-profit—both focus on understanding the customer.

He has dropped the “interim” from his title, meanwhile making a deep dive into all things zoo-related. His main challenge has been raising money during a pandemic.

“We met our Annual Fund goal of $35,000 in June,” he says, explaining that the fund helps with general operations, principally off-setting the cost of seasonal and permanent staff. “Now we’re challenging ourselves to do $50,000. We are just barely south of $40,000. We won’t reach 50K, but it’s something we need to shoot for.”

The pandemic closed the zoo from March until June 11, resulting in, Shafer says, a 45 percent drop in revenues from beginning-of-the-year projection.

“Fortunately,” he says, “we’ve been able to do some cost containment without any personnel reduction, and we don’t anticipate having to furlough or lay off staff.”

Shafer says federal money, including a Coronavirus Small Business Administration Loan, and some no-interest loans from the state have been key to helping the 115-year-old zoo survive.

DNREC has already committed an initial $5 million toward the first two Phases. Now, in support of the plan, the DZS has embarked on a three-year, $5 million capital campaign to initiate and complete Phase 3, which will feature a South American Wetlands Habitat with Chilean flamingos and an improved entryway, creating greater visibility and accessibility.

Scheduled to open this fall, the Madagascar Habitat is perhaps the crown jewel thus far of Our Zoo Re-imagined. A professional rockwork company has created an artificial mudbank retaining wall with a recirculating pool and waterfall. The exhibit will have multiple levels for the animals and multiple viewing areas for the visitor. The animals that will call this new space home include black-and-white ruffed, ring-tailed, and crowned lemurs, radiated tortoises, and guinea fowl.

Shafer seems to have quickly settled into his new job. He credits his predecessor, Allen, for being especially helpful. “This guy is fabulous,” says Shafer. “He remains a resource for me, and he built a remarkably strong team. People that work here have an unbelievable passion for this organization.”

He also cites the board of directors, saying “they have really stepped up” in this time of crisis.

And, of course, he’s learning plenty about animals. Some of that education is the result of Brandywine’s membership in the Association of Zoos and Aquariums, which requires a rigorous accreditation process every five years. AZA membership means that Brandywine has access to animals from around the world that never otherwise would be seen in Delaware. Membership also has enabled the zoo to acquire many rescue animals, including:

• An eagle with a broken wing found on the ground  in the wild after a severe storm, and another found on the ground and unable to fly because it had a belly full of lead fishing weights. It developed heart problems from the lead and can’t fly more than a couple of wingbeats.

• A Florida bobcat, “Squeakers,” brought to the Audubon Zoo in New Orleans as a wild rescued cub and transferred to Brandywine.

• A serval, a wild cat native to Africa, that was an illegal pet spotted roaming the streets of Newark a few years back. The SPCA caught her and brought her to Brandywine.

• “Sandy,” the Sandhill Crane, who was hatched in the wild and came to the zoo through a wildlife rehabilitator. He was found in Maine, separated from his flock. Due to his need for ongoing medical attention and his young age, it was not possible for Sandy to be reunited with his flock, which had long since migrated.

• “Candace,” the capybara that was confiscated by Massachusetts Fish and Wildlife from a private home. Capybara, sometimes called the world’s largest rodent, can grow to more than 100 pounds.

In total, there are 23 rescued animals and nine from other AZA zoos now at the Brandywine Zoo.

In late August, while giving a visitor a tour of the grounds on the banks of the Brandywine, Shafer briefly donned his marketing cap to note that in this time of virtual get-togethers you can invite one of the zoo’s animals to your Zoom meeting for just $50. “Beastly Guests” info is available at brandywinezoo.org/zootoyou/#beastly-guests. He also touts the Virtual Birthday Party for youngsters. Information on the $30 and $50 packages is available by emailing birthdays@brandywinezoo.org.

His failed attempt at retirement behind him, the tall, slender ex-ad executive is obviously enjoying his new gig.

“I wanted to do something different, perhaps work with kids,” says the father of three. “And I feel like I am working with kids, at least indirectly. I was out here yesterday, and the place was teeming with young families. This place is fun. I love it!”

The Brandywine Zoo is open every day from 10 a.m. to 3:30 p.m. until at least December. Visitors age 5 and above must wear masks. For more information, go to brandywinezoo.org or call 571-7747.