Above: The cast of the film The Menu. 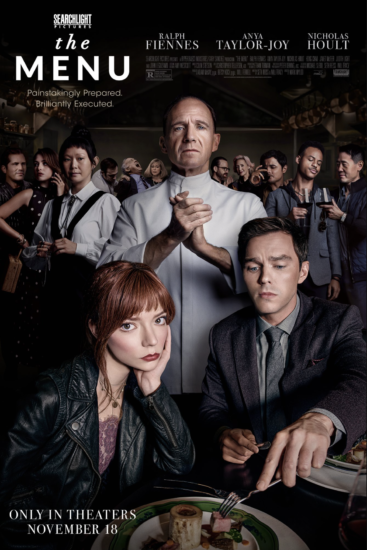 Ralph Fiennes, the sturdy and prolific British actor, has mastered imperiousness with his roles in both the Harry Potter (as Voldemort) and Bond (as M) franchises, so he is well prepared for his role as celebrity chef Julian Slowik in The Menu. Slowik’s uber-exclusive restaurant offers a tastings menu at the lordly sum of $1250 per person, and so he caters to a very exclusive and haughty clientele. A hand-picked group of well-heeled diners (including Nicholas Hoult, Janet McTeer, Judith Light, John Leguizamo, and Anya Taylor-Joy) are assembled for this particular night, and there is more than exquisite food on Slowik’s menu. The Menu is an ink-black satire of oh-so-precious high-end foodie culture, but beneath its polished veneer, it is also a sly commentary on class resentment, and a timely reminder that those who might justifiably seek to bring down the mighty could just as easily invite disaster upon themselves.