Above: Chicken sandwiches, including ones that “pack a punch,” remain a hot food trend.

The culinary arts have a lot in common with design and fashion. As pop culture changes, certain dishes become more popular. Chefs embrace new ingredients or find innovative ways to invigorate the old.

Here is what’s trending for 2023 in Delaware.

Admittedly, chicken sandwiches are nothing new. Consider that the first Chick-fil-A restaurant opened in 1967. Initially, customers couldn’t fathom eating fried chicken without a bone, founder S. Truitt Cathy told me for a trade magazine article. But by cooking a de-boned chicken breast in a pressure fryer, he cut the cooking time in half, he explained. His secret recipe also includes 20 different seasonings. Competitors caught on, and like Cathy, they realized that a chicken sandwich offered an advantage — it’s tasty hot or cold. 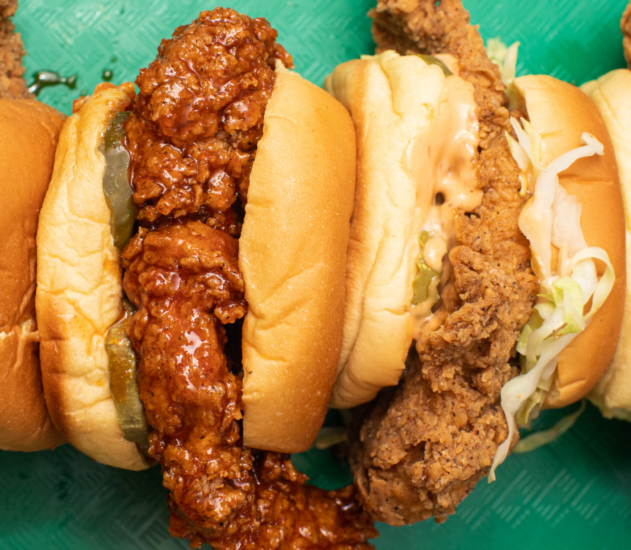 Chicken sandwiches, including ones that “pack a punch,” remain a hot food trend.

Despite its familiarity, the chicken sandwich is a top trend, according to the 17th annual What’s Hot survey, a collaboration between the National Restaurant Association, the American Culinary Federation and Technomic. Credit the popularity of Nashville hot chicken, which is marinated in seasonings and covered in a cayenne pepper sauce or paste. A little honey can offset the spice.

If you want to test your tolerance, try Fuku’s spicy chicken “sando,” available in The Chancery Market Food Hall at 1313 Market Street in Wilmington. The kick comes from a habanero brine and “Fuku mayo.” I, for one, can attest that the sandwich packs the heat.

KatiRoll Wala also opened in The Chancery Market, and this newcomer to Delaware focuses on kati rolls, a street food in Kolkata, West Bengal, in India. Like a gyro, a flatbread wraps a filling, typically cheese, chicken or egg.

The sandwich is not the other global street treat that’s catching on. Many Delaware diners are familiar with falafel, which you can eat alone or as a sandwich. The main ingredient is chickpeas or fava beans, which makes it appealing to vegetarians.

You can find falafels at Home Grown Café in Newark, where the fried orbs arrive on grilled pita with alfalfa sprouts, lettuce, tahini and a salsa made with tomatoes, cucumber, onion and parsley.

Since then, he’s teamed up with Nick Vouras of Nick’s Pizza to offer some creative fare. Last month, for instance, he sold the Aloo Tiki Sammy: a crispy potato patty with shredded lettuce, tomato, red onion and mango achaar mayo on a potato roll. “It’s inspired by a menu item at an Indian McDonald’s,” he explains.

Indian, Middle Eastern and Japanese foods are no longer a rarity in Delaware. Nationally, Caribbean dishes are coming on strong. The cuisine is a melting pot of Latin and African foods, and flavor profiles feature sweet ingredients (sweet potato and squash), fruit (tamarind), fragrant spices (allspice and nutmeg) and peppers.

At D & H Jamaican Cuisine in Newark, selections include jerk chicken and pork, oxtail stewed in brown gravy, curry goat and chicken and roti, a wrap-style sandwich. Incidentally, the roti has East Indian roots; contract laborers from India brought the flour wrap to the islands in the mid-1800s.

According to the What’s Hot survey, Southeast Asian flavors are also hot for 2023. Diners accustomed to Vietnamese fare may want to try Singaporean or Philippine cuisine. The former is harder to find in Delaware. But for the latter, try OMY Smoked BBQ in Concord Mall, which has several different flavors of silog. The national dish is typically made with garlic fried rice and an egg with optional meats. The restaurant also serves adobo, commonly made with pork or chicken simmered in vinegar, soy sauce, garlic, black pepper, and bay leaves. 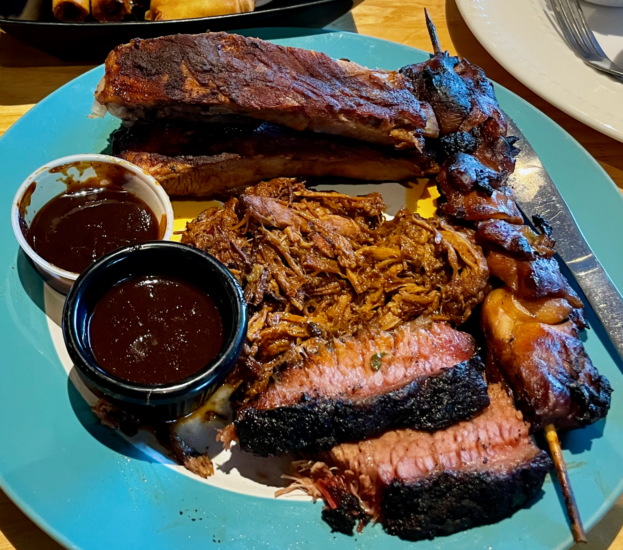 However, the bulk of OMY’s menu is devoted to familiar barbecue dishes, and while the slow-and-low cooking method isn’t on national lists, it’s trending in Delaware. Witness the opening of Uncle John’s BBQ Stand in Claymont, an offshoot of owner John Berl’s food truck business. In Rehoboth, the operators behind Bethany Blues have leased one of Nicola’s old spots for Downtown Blues. Last year, the Lewes Bethany Blues was renovated to create a carryout area.

Understandably, pulled pork and macaroni and cheese hit the spot. As we continue grappling with the pandemic, people gravitate toward comforting dishes that rekindle the past. Juicy prime rib, crispy fried chicken, and meatloaf are menu highlights. For example, a bestseller at Dorcea in Mid-Town Brandywine is a char-grilled meatloaf with a spicy glaze. Indeed, these aren’t always your grandmother’s recipes. Grotto Pizza, for instance, added cheesesteak macaroni-and-cheese to its winter menu.

Even trendy cocktails are homages to the past. Consider the Dirty Shirley, an adult version of the Shirley Temple, a child-friendly favorite. Make the Dirty Shirley at home with Black Infusions Dark Cherry Vodka, available at area stores, including Total Wine & More. The recipe also includes ginger ale and lime juice. But forget the red maraschino cherry of your youth. Instead, use Luxardo.

As for non-alcoholic drinks, the plant-based milk category is booming. Along with soy, you’ll find rice, oat, almond milk and banana milk from Moola, available on Amazon. It’s surprisingly good on cereal.

Salt is shaking up the artisanal market. Consider that global sales should reach $5.32 billion in 2026. Many manufacturers are getting creative. For example, Barton Seaver and Skordo teamed up for wine-pairing salt blends. (Find them at skordo.com.)

But the appeal goes beyond blends. As with coffee, oysters, wine grapes and cacao, a salt’s flavor changes depending on the origin. Henlopen Sea Salt comes from seawater near Cape Henlopen in Lewes, which makes it popular with chefs supporting local vendors and tourists.

The product has often sold out, and owner Dave Burris is ramping up to meet this year’s demand. “We plan to relaunch our wholesale program for stores in early 2023, and we expect to finally find a permanent home for our expansion sometime during the next year, which will allow us to do many things we don’t currently have the space for,” he says.

Another gourmet trend is heritage meat, which comes from animals with a proven pedigree; the breeds must conform to specific standards. Robert Lhulier compares it to heirloom seeds that haven’t crossbred or been subjected to scientific tinkering.

“With meats, the animals are heartier and mature more slowly, and they are raised more naturally,” said the chef, co-owner of Snuff Mill Restaurant, Butchery & Wine Bar. “Those who raise them take more care and pride in their stewardship. And they taste better.” 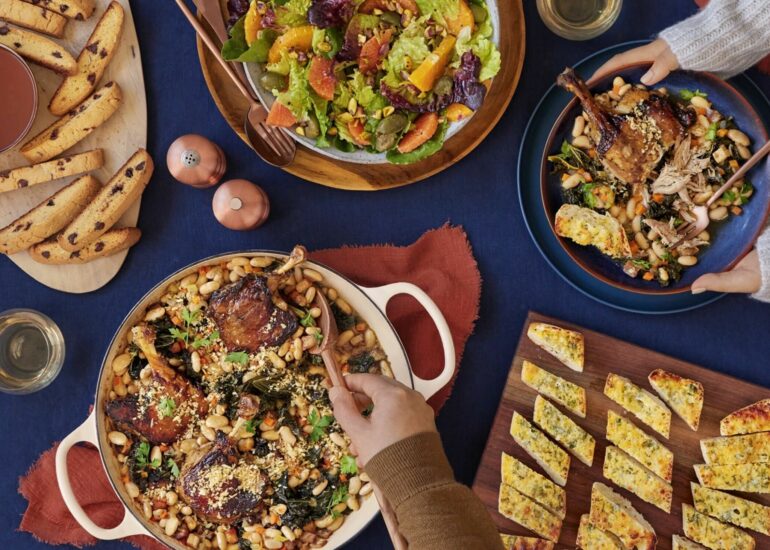 The Fireside Feast by Blue Apron.

Meal-delivery services continue to evolve to complement customer lifestyles and diets. For example, Blue Apron, for instance, now has ready-to-cook meals with minimal prep. The company also offers limited-time meals in a box that fit a theme. The Fireside Feast Box, for instance, is a dinner party for four.

The kit contains portioned ingredients for duck confit cassoulet, parmesan-and-garlic-herb bread, orange-and-pistachio salad and chocolate-and-almond biscotti. (The bread is already cooked.) It’s available in January and February at BlueApron.com, and you do not need a subscription.

Kombucha — a fermented, lightly effervescent, sweetened black tea — has been on the shelves for some time. But in 2023, the gut-friendly fermented segment is likely to grow. Kimchi, an everyday food in Korea, is now a substitute for sauerkraut and slaw on sandwiches. Try Cleveland Kitchen’s products, available in Acme and Sprouts stores. (The company also makes sauerkraut.)

Judging by this list, the overarching theme is flavor, and, as far as dining is concerned, 2023 should be anything but bland. 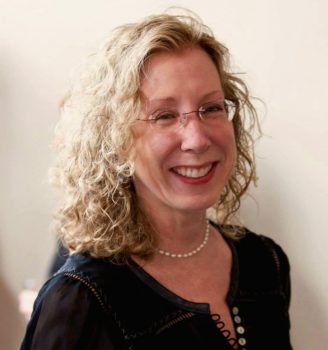