To move forward, White citizens should examine how we arrived at this place

Think about that for a moment. Please.

There have been endless atrocities perpetrated against Black people in America for 400 years, and it just didn’t seem to matter to the majority of its White citizens. You name it, it has been done: rape, murder, terrorist attacks, voter fraud, housing discrimination, education discrimination, etc.

Racism is so ingrained into the fabric of America that when you talk about it, many White Americans think you are talking about them, specifically, and are offended. In 2000, roughly 90% of U.S. Congress was White, which shows you where we were at the end of the 20th century in America: still, essentially a country that was run by White people… for White people.

Consider these facts regarding America today:

There have been many protests throughout the years about the abuse and discrimination of Black people in America. These issues have been well known. Until recently, the problem has been the appearance that the only people who have been alarmed and disturbed enough to demonstrate, protest, or even write or sing about it have been Black people.

America has lost some of its clout or prestige in the eyes of some of the world because of its gross hypocrisy. We have gone all over the world telling other countries how to treat their people while, at the same time, our history proves us to be one of the worst violators of human rights. Even when Black soldiers returned from foreign lands, fighting for the freedom of this country, they did not, in turn, get freedom for them or their families. We have a lot of work to do in America if we are seriously going to make this country great. We must be willing to take a closer look at the dark past.

The problem has been that White people in America have been uncomfortable speaking about race. With the exception of a small number, Whites have not shown they care about what was being done to Black people even though they were supposedly friends, coworkers or teammates. The silence of good White people in America is what has perpetuated the status quo and has prevented America from becoming all that it could be—or all that it says it is.

In most cases across America, White boys and girls in preschool and elementary school get along just fine with similar-age Black boys and girls. You see, if you just leave children alone, hatred and prejudice does not register. But later, as these children grow older, the enjoyment of White privilege creates boundaries where there was once pure, natural love and affection for the human beings. Consciously or unconsciously, it becomes advantageous for Whites to separate themselves—or to allow themselves to be separated—and not take stands on racial injustice that affects all the people.

In addressing race, from my perspective, there appears to be three categories of White people in America: those who are out-and-out racist; those who aren’t racist, but enjoy white privilege and therefore do very little about the systematic injustices all around them; and then there are the good White people, who are as upset about racial conditions as Blacks.

If America has any chance of changing the way it does business regarding race in this country, we must hear from that “middle group.” That group can no longer stand in the middle of the road. (By the way, to those Whites who say they don’t see color or they are not prejudiced or they are not racist, but do nothing to change the conditions set by those who are: You are very much part of the problem.) 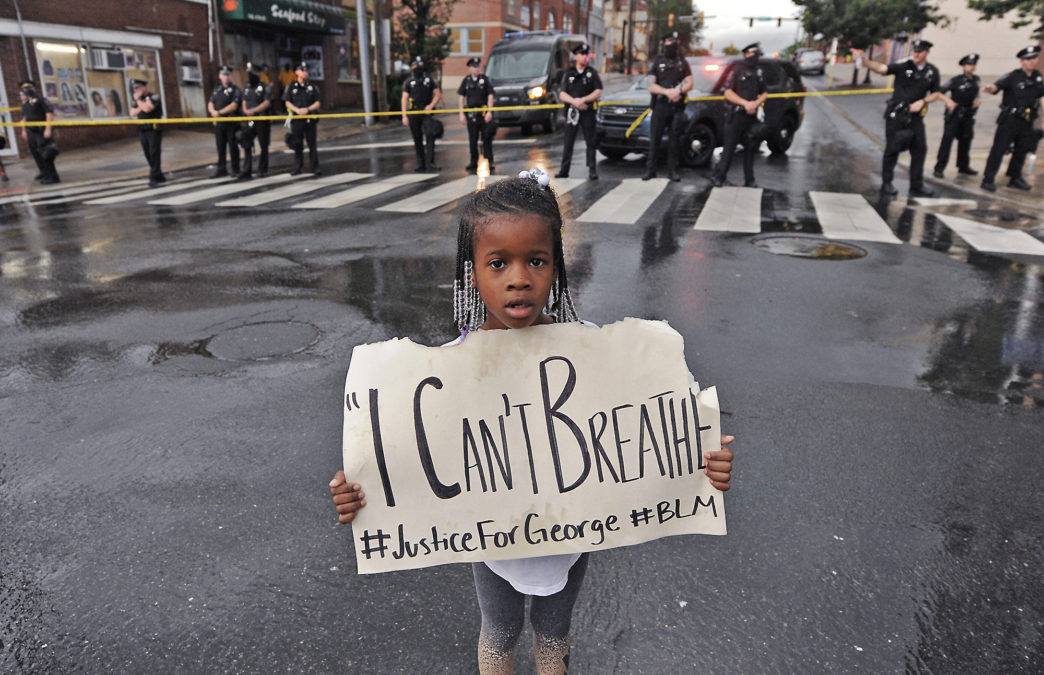 A youngster attending the “We Still Can’t Breathe” rally held in Wilmington last month shares a sentiment echoed by many since the tragic death of George Floyd. Photo: Butch Comegys

Where do we go from here? We must have real dialog that leads to action that, in fact, makes America the place where all men and women are free and where liberty and justice are indeed for all.

To start the dialog of healing in America we must talk about some very sensitive issues for White folks. It means for some people to give up the idea of White privilege. It means to live up to the wording in the Constitution that, for too long in this country, was understood to only apply to Whites. Up until recently, the words: “We hold these truths to be self-evident, that all men are created equal” has been a complete lie. And even today, with what we’ve seen just this year, we know it still doesn’t ring completely true, either.

The good news is that together we can change that. It can happen and it can happen in our lifetime. It takes dialog. We have to all be willing to discuss issues that are sensitive and difficult but necessary. This country could truly be great for everyone—and could truly be the greatest country on earth—but it is not that now and it never has been. Maybe in some eyes it has, but not for 13% of the population that is Black.

In order for our leadership to stop playing games, those of us who know how things are supposed to run have to become leaders. Voters must be educated to the point where they are not manipulated during political campaigns or on Election Day. We must elect more people of integrity who are open and sensitive to making America great for everyone.

The solution is near. The time is now. Blacks in America aren’t going anywhere. We love this country and have proven it over and over again. America was built on the backs of the free labor of our ancestors. We have fought in wars to defend America; we have been trusting in the courts and in the Constitution; we have tried to pull ourselves up by our boot-straps until we realized we were not given any boots.

We have done everything America has asked us to do and we are wondering when America is going to live up to its own promises. The Time is Now!

— Larry M. Morris has served the Wilmington community, for several decades, in a variety of ways that have included: directing youth programs, former President of the Wilmington NAACP and former Director of Community Affairs for Congressman John Carney.