One of the great pleasures of producing this magazine for more than three decades is the wide range of talented storytellers we’ve had the privilege of publishing.

And one of the special gifts of storytelling: The words outlive the person who wrote them.

In late June, Jerry “Crabmeat” Thompson passed away at Wilmington’s St. Francis Hospital. Like Satchel Paige, Crabmeat never shared his age with anyone, confessed his wife of 23 years, Janice “Crabcake” Thompson. I’m guessing he was in his mid-70s.

Crabmeat was an author, educator, musician, advocate, ambassador, and all-around fascinating guy. He also produced award-winning stories for Out & About Magazine for more than a decade — and was a friend of the magazine since its inception.

To say his writing style was unique is an undersell. His pieces never took a linear path. Instead, they took you over the river and through the woods — then around some fields, over an embankment, into a creek, and through a tunnel…with you ultimately arriving on horseback. Yes, Crabmeat’s stories were quite the journey.

Out & About is honored to have had Crabmeat’s prose grace our pages. And if you didn’t know him, well, perhaps the following piece (Crabmeat’s last contribution to Out & About, August 2011) will help paint a picture — not to mention provide invaluable crab-eating tips from the legend himself. 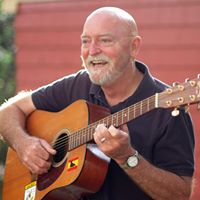 The Fine Art of Eating Crabs

When Out & About called me suggesting I write a piece on “how to eat crabs,” I figured it had something to do with my nickname, “Crabmeat” — stuck on me years ago because of a brief lapse in personal hygiene.

What the editors didn’t realize was that my moniker often gets me invited to play music at crab feasts. And though they are jolly events, and often for charity, they present three problems: 1) the banging of hammers doesn’t provide the optimum backup for folk music; 2) the Old Bay in the air tends to get up your nose, into your lungs, and down the old raw throat; 3) starvation, which ordinarily sets in as you scrape out your fourth or fifth crab, attacks the guitar picker much sooner. No way one can pick crabs without scarifying the fingers and filling the abrasions with spicy Old Bay. So you starve in the midst of plenty.

Moreover, you do so to that beat of that constant pounding:

So I have mixed feelings about eating crabs.

But then, there’s the rent to pay.

Plus it occurred to me how nice it would be to, for once, sit somewhere by the water and actually eat some crabs; so I emailed the spouse to see if she could join me for crabs on Friday. She faxed me back that she had to work that night, so we decided to go for lunch somewhere close, and settled on a rustic place in Delaware City.

The day was gorgeous — one of those low-humidity days in the 80s with a blue sky half full of fluffy cumulus clouds, a light breeze ruffling the river into wavelets, a few boats buzzing out around Pea Patch Island, and the bushy midsummer tree canopy hiding “our” reactor as we strolled near the little traffic circle at the north end of Delaware City’s main drag.

The restaurant menu stated that rookie pickers could ask for assistance from a veteran to help them crack that carapace. So as soon as we were seated I explained to our comely waitron that Janicemeat was from rural Pensyltucky and had never really done the crab thing; hence we’d like a crabtutor. Also that I would be taking photos and that she would be in them since JM said she was really cute. I have no opinion in these matters.

Sadly, that was all she needed to avoid us as if I had dropped my drawers and jumped upon the table to recite “Kubla Khan.”

So, I took on the role of tutor and proceeded to teach Janicemeat all I know about cracking crabs, and I believe the pictures will bear me out when I say that I did a half decent job.

Disassembling a crab, you can first pull its legs off or leave them on to use as little handles. Turn the crab on its back and prize up the “apron,” the little pop-top thingy near the bottom. If you do it right the top of the shell will come off, too. Then turn the crab over so it is right side up and lay it down and you are looking at some greenish stuff, the “mustard.” Some people eat this and some don’t, but it isn’t recommended. Beneath the mustard are the gills, and these should probably be tossed. Which brings up: don’t wear fancy clothes for this, have plenty of napkins or towelettes, and NEVER point a crab you are cracking at anybody else.

Now you’ve divided the crab into body and legs. You can toss the little back legs away unless you want to try to suck out the teeny bit of flesh inside. By this time I’m pretty hungry, so I set them aside and crack the large claws with a hammer. There’s nice meat in the claw and some in the “arm,” but don’t waste your time on the elbow. Get right to the body.

You can pick up the body and crack it in half and find nice fluffy white meat inside the chest cavity. Get it out with a knife or just use your mouth and fingers. By this time everything is a mess anyway, so why put on airs. By this time, if you have been drinking responsibly you may give in to the temptation to start mashing stuff (responsibly) with your mallet.

Go ahead! You worked hard all week! Enjoy. 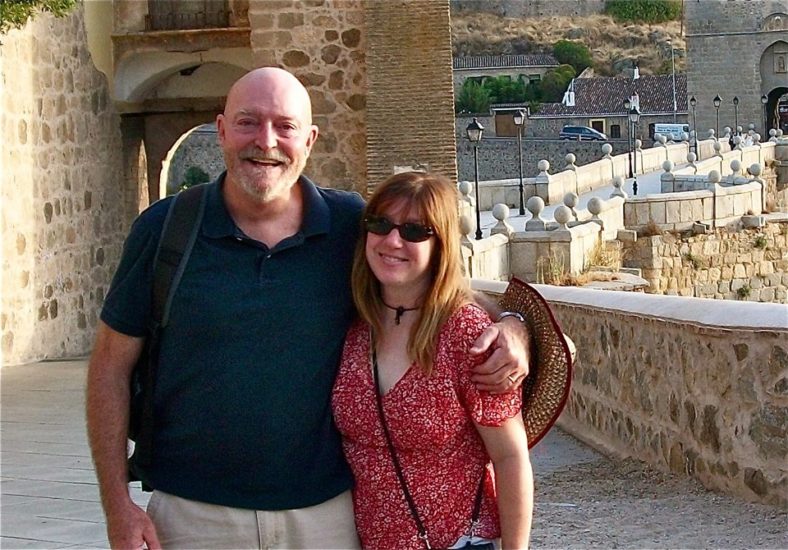 Crabmeat Thompson with his wife Janice “Crabcake” Thompson on one of their many adventures.

The Tragedy of Unintended Consequences