Jane Pierantozzi knows her faith has called on her to help. Children’s welfare, at first, and for more than two decades, the strays, foundlings, feral cats and pets that their humans can no longer care for, in other words, those faithful friends who can only bark and meow.

“We all have a purpose in life, and my purpose is to bring the message that animals were made to be our friends and companions, and that we need to change the way we do many things,” said Pierantozzi, founder of the Faithful Friends Animal Society. “And it also will open our own souls to greater love and compassion.”

Her devotion is timely because the Faithful Friends is opening a large, state-of-the art, purpose-built, multi-use facility — a significant upgrade from its deteriorating rented spaces.

And she has more items on her agenda, such as helping dogs with behavior issues, too many cats  that are treated as second-class and dogs raised for experiments. “We can do better,” she said.

Pierantozzi was born in Wilmington and graduated from Padua Academy. She earned a bachelor’s degree in business from the University of Delaware and a master’s degree in social policy and social law at Bryn Mawr College. Before founding Faithful Friends in 2000, she was all about improving the well-being of others, through jobs at the Wilmington runaway shelter run by Child, Inc.; Delaware’s budget office; and the Delaware Department of Health and Social Services (learning about the importance of prevention, early intervention and long-term care — people-oriented concepts that she would later apply to animals).

For her 5,000 Facebook friends, she mostly shares posts about animal welfare, veganism and faith. “Everything I learned in life about the character of God I learned from my pets,” she wrote in 2017, and those ideas recurred in a recent interview. “Animal show us unconditional love and loyal companionship,” she said. “They teach us forgiveness, give us joy and teach us peace.”

She was brought up Catholic by her parents, Amerigo and Elia, immigrants from Italy, and today she follows Jesus. She often attends services at The Journey — which has its main church near Newark and a satellite operation at Wilmington Christian School near Hockessin — or at Brandywine Valley Baptist in North Wilmington, where she is friends with Pastor Terry Foester and his wife Libby, who are also vegan.

She also quoted St. Francis of Assisi and Albert Schweitzer on how humanity needs to extend its compassion to all living beings. “We treat all animals by names, not numbers,” she said, noting that they use a baby-naming book to name incoming kittens. “When you say their name, it’s just incredible. They’re just like people: They want you to know their name and who they are.” 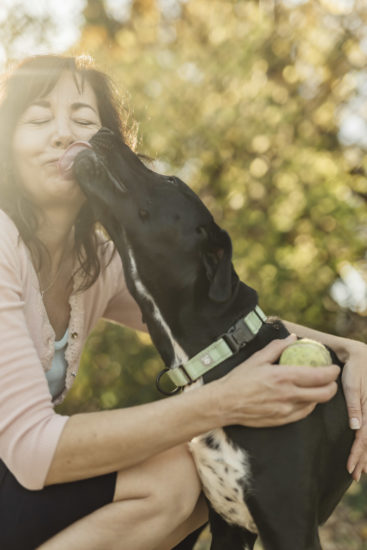 Pierantozzi finds it helpful to start each day with First15, an app that encourages her to meditate and connect with a loving God, before she confronts the hectic demands of modern society. Instead of hurrying, she wants to slow down and prioritize personal relationships.

That said, she devotes long hours (60 a week, according to Faithful Friends’ tax form) to the nonprofit. She tries to reduce the commitment of running a seven-day operation to working only five or six days, although her first email to arrange her interview was sent at three minutes after midnight.

Her concerns about animal welfare go beyond the cats, dogs and other animals rehomed at Faithful Friends. A decade ago, horrified to read about conditions in factory farms, she gave up eating dairy, pork and beef. That has evolved into becoming a vegan, getting rid of leather goods and co-founding an education and policy advocacy group called Plant Powered Delaware.

“A plant-based diet is not only the most compassionate diet, but it’s also healthier for our bodies and better for the environment,” she said.

Pierantozzi shares her Wilmington row home with Emma, a rescued poodle-bichon frise mix. Emma is a pescatarian whose Cushing’s disease is helped with a cleaner diet.

Her beliefs also cause her to question rampant materialism and espouse a simpler life, with an increasingly minimalistic décor at home. Her simplicity extends to her favorite pursuits, such as spending time with friends and her close-knit family, participating in a Christian book club run by Pastor Daryl Smith at The Journey Hockessin location and hiking with Emma.

“I like my downtime, my quiet time,” she said.

She accomplishes her goals with 85 staff members at Faithful Friends, 400 volunteers and “a great partnership with our legislators” (to pass reforms for which almost all were passed unanimously in the House and the Senate).

Those legislators voted to give Faithful Friends 27 acres for its new campus, off Airport Road, near New Castle, once part of a Delaware Department of Motor Vehicles inspection facility. About seven acres is buildable, and existing trails on the wetlands remaining will be expanded for dog walking. 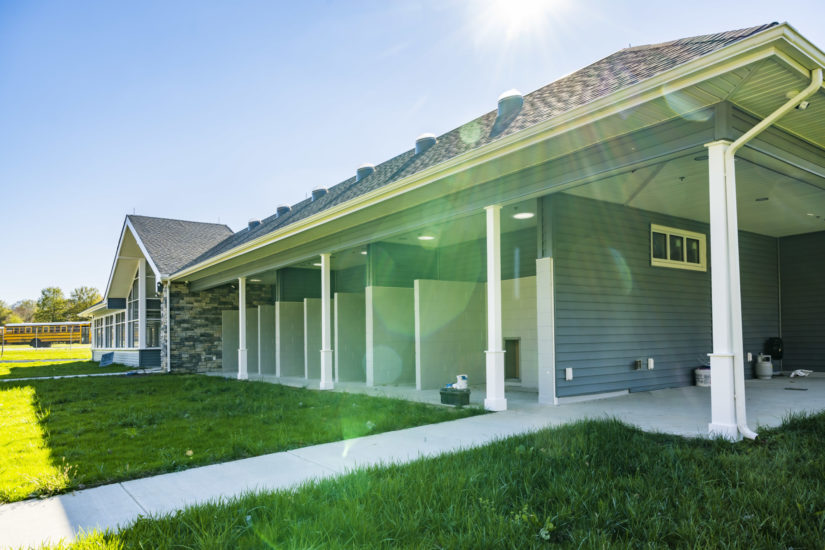 An exterior view of Faithful Friends’ new facility in New Castle, which will be about 50% larger than the nonprofit’s current operations that are conducted in two buildings on Germay Drive.

The Sharon Struthers Animal Adoption and Community Resource Center is 17,500 square feet, about 50% larger than the nonprofit’s current operations, in two buildings on Germay Drive, southwest of Wilmington. Pierantozzi plans to continue to rent one Germay Drive building as a spay/neuter clinic event for a while after the new center opens early next year.

“We’re not just a shelter, but a resource,” said Struthers, who has been on the board and active in various leadership roles for 12 years. “We’re the voice for animals and a model for other states.”

In 2000, Pierantozzi and fellow pet lovers exposed that state-funded shelters in Delaware euthanized 90% of the animals they handled. That’s a stunning contrast to today, when 90% are rehomed. The First State is the only state with all no-kill shelters, she said.

She is going for what she calls “no-kill-plus”: safety options for special needs animals; better access to low-cost spaying, neutering and other veterinary care; ways for the homeless to keep pets in their lives; a food bank with pet food; and advocacy.

“Our safety net is beyond the shelter,” she said.

The new facility will be able to house 60 dogs (up from 35) and about 250 cats and kittens (about the same) in far better conditions, including lots of natural light, indoor and outdoor spaces, larger cages, sound dampening to reduce the stressful spreads of barking dogs and separate air systems to reduce the spread of diseases between health-care areas and adoption areas.

“It’s a big improvement in living conditions for the animals,” she said.

There will also be more specialized spaces for people, such a break room and a volunteer training and project area, and for expanded pet care, such as a surgical suite with space for two veterinarians and two examination rooms.

The About page of FaithfulFriends.us lists several key legislative efforts that Pierantozzi and Faithful Friends have led:

• A 2006 Delaware law required shelters to spay/neuter pets before adoption and set up a spay/neuter fund for low-income pet owners. The law became “a national model for animal welfare.”

• A 2010 Delaware law required shelters to provide basic medical care to animals, extend a 72-hour  hold on strays to include cats and be transparent about what happens to the animals they take in.

• Delaware in 2013 set up a consolidated Office of Animal welfare.

• A 2021 law quadruples the fee that pet-food brands pay to sell in Delaware, that in three years is forecasted to bring in estimated $650,000 a year for spay/neuter programs (for the poor, for feral cats and for shelters).

In a 2018 News Journal essay, Pierantozzi supported a few more initiatives: a 2012 law limiting how long dogs could be chained and a 2015 law that allows first responders to break car windows when pets are left inside on hot days. And in the interview, she talked about getting state money to help shelters care for surrendered animals, which the pet food fee may help address.

“We strive to be a comprehensive animal welfare organization,” she said. “When people call us and say they’re very upset about a situation, we don’t just say, ‘I’m sorry, we don’t do that.’ We say ‘Let’s see if we can help you come up with a solution.’ ”

The Bountiful Business of Pets