The local rock music scene is one of contrasts. On the one hand, there are the tried and true cover bands who have cultivated a dedicated following over the years—some over several decades. Then there are the bands that generally eschew the songs laid before them by others and decide to go all-in on their own material.

One band in the latter camp is Earth Radio, a quartet shimmering with high-energy happiness, sweet harmonies, and positive vibes who inspire local music lovers to wiggle a limb and stomp a foot during a performance. Their shows are a gathering of like-minded souls seeking to surf a wave of infectious groove and positive energy. Their music is also one of contrasts, fusing upbeat folk with danceable funk and dirty rock and roll, providing the local music scene with a unique sound.

Earth Radio came together when singer/guitarist Jani Duerr was busking on the streets. “I was looking for a female singer to harmonize with, so someone shot me to Joanna,” he says. “And then we just started, we had a thing going on, and we were just playing in the woods singing hillbilly music. Then we realized we needed a drummer. Dan had just recently separated from his band, so I was thinking, ‘Oh, my God, we have to get him!’”

Dan Lord III joined the fold and, together with bassist Jay Jolly, they provide the crisp rhythm section that underpins Earth Radio’s sound, particularly on a song like the six-minute “Shambala.”

Catch one of their performances and you quickly realize that they are having fun—a lot of fun. “One of the most common quotes I get from people is, ‘You can tell everyone on stage is having a great time,’” says Lord. “And that makes it difficult for everyone in the audience to not do the same.” 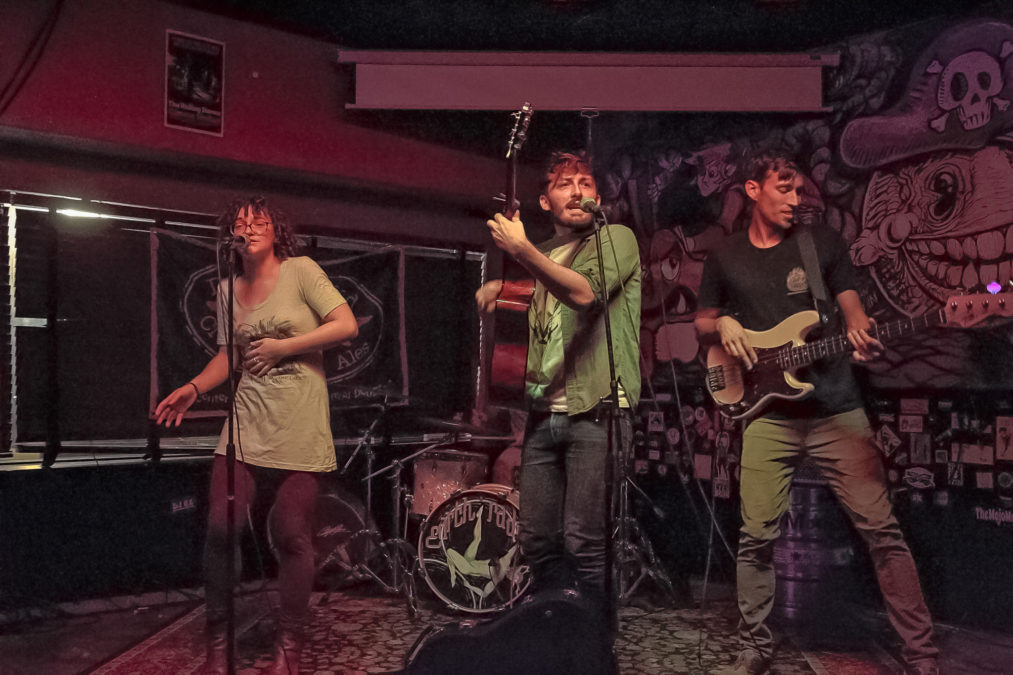 Members of Earth Radio—and their audience—have fun during a performance. Photo Kevin Francis

4,000 Plays On Spotify
Last October, Earth Radio held a CD-release party at 1984 for their EP, We Built a Mountain, which has been in heavy rotation on 93.7 WSTW’s Hometown Heroes program and is available on all major streaming platforms. Since then, they took off most of a couple of months to recharge for the coming year while enjoying the response to their release.

“We have been actively growing online,” says Duerr. “Our song, ‘Miss America,’ has over 4,000 plays on Spotify and counting. We’re planning a music video for that song now. The CD has almost sold out of physical copies, for which we are incredibly grateful.”

But the band’s strength continues to be in live performances. Says Jolly: “My best friend, Richard, says, ‘The album is good, really good, but you guys are totally a live band. The energy is insane!’ I hear that from a lot of people, however, and if that’s so then we’re doing a good job. Foot-stomping, hand-clapping, booty-shaking music is what we do!”

Members of Earth Radio continue to grow in their individual styles while developing their distinctive overall sound.

Jolly is a disciple of John Paul Jones of Led Zeppelin, and Flea, of the Red Hot Chili Peppers. “The first CD I bought and always brought with me was (the Red Hot Chili Peppers’) Stadium Arcadium,” he says. “I was listening to it recently and had this huge blast to the past where for like two or three years, that’s all I listened to. I picked up my bass to it and still remembered all the lines, or figured them out fairly quickly. I hope to bring that energy in my playing and stage presence, but tuned to the Earth Radio frequency.”

Osborne, who is also a dancer, says, “My vocal training is rooted in choral singing, so I’m used to harmonizing in a choreographed way. I love how I’ve become more comfortable with my ability to follow a spontaneous feeling instead of desiring something to be set in stone. I’ve been heavily influenced by the powerful harmonic style of bands such as Fleet Foxes, Joseph, and Rising Appalachia. These bands not only carry intense authentic emotion in their voices, but have strong story-telling elements that inspire me.”

Duerr, the effervescent front man, is inspired by the “powerful lyrical imagery and accessibility” of Bob Dylan and “the artistry and commitment to authenticity” of Bjork. He admits he is a singer before being a musician.

No  Written Lyrics
“I try my best to explore the entire range of my voice during each performance and often try to hit my highest and lowest notes throughout the set,” he says. “I also love experimenting—so does Joanna —with alliteration, inflection, sliding, improvisation, etc. We have several songs that have sections with no written lyrics where she and I both just play vocally off of each other with whatever feels right in the moment. This way, each show feels organic and new. You technically will never see the same show twice.”

Lord played clarinet for four years and baritone horn in grade school, but quickly picked up rock and roll in high school, then navigated through blues, funk, jazz and hip hop. “My overall style now is an accumulation of all of those things,” he says. “And with Earth Radio I also tried to add aspects of traditional folk to stay true to the genre. My biggest influences as a performer are my peers in the music community. My music friends and family are constantly pushing themselves to new heights and experimenting with new sounds and when I play, I play for them.”

To Earth Radio and their fans, their sound is not only fresh, fun and danceable, but necessary. “There is a lot to feel sad and angry about today,” says Duerr. “Those are very valid emotions; however, I wanted to make a sound that felt completely positive, energizing and uplifting.”

“Our trademark is the infectious, joyful energy that we emanate when playing live,” says Osborne. “The goal is for you to leave smiling and feeling loved.”

With a new CD, a burgeoning schedule of gigs, and a unique sound, Earth Radio is gearing up for an exciting 2019 and beyond. When you catch their act, be prepared to wiggle a limb or two and stomp your feet. They’re not your typical bar band.

Shining A Light On Light Up The Queen