Like all great plans, it was foolhardy: Open a bar that has the familial warmth of television’s Cheers, the sticky-floored danger of CBGB, and the innocent nostalgia of your beloved childhood arcade. Overcome an increase in degree of difficulty by being a stranger in a town and state where connections reign supreme while also being a novice in a business with all the job security of being a drummer in Spinal Tap. And somehow thrive without the industry standards of food, liquor and sports.

It should not have worked, but somehow it did. For nearly a decade, 1984 was the place where Wilmington’s introverts came to be extroverts and ground zero for a resurgence of local original rock and roll. 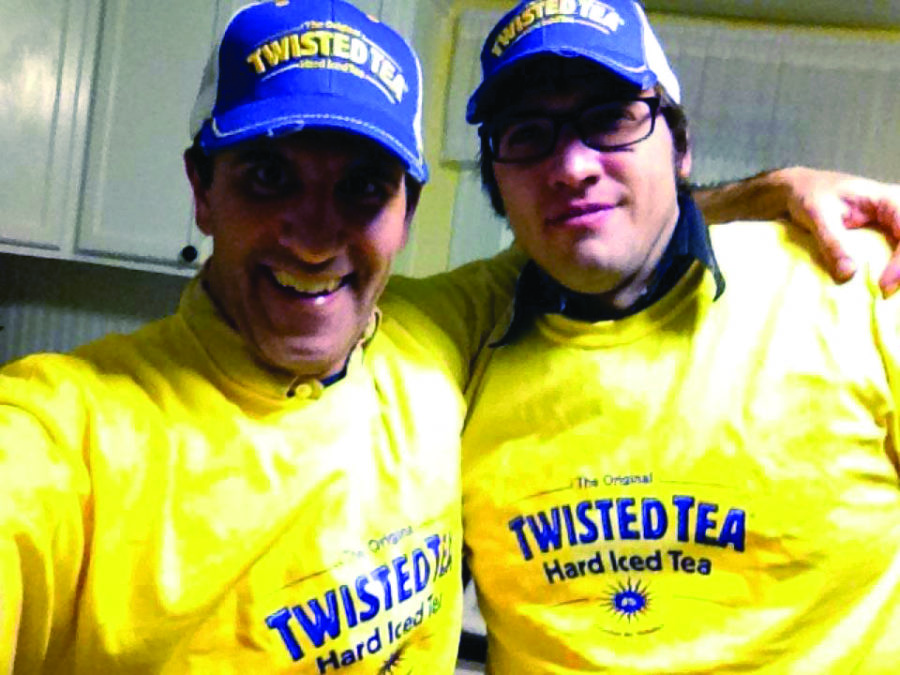 I often think of the quote “I’d rather be lucky than good” (a phrase spoken by New York Yankees’ pitcher Lefty Gomez in the 1930s, which I’ve been falsely attributing to Van Halen ringleader David Lee Roth) when I ponder 1984’s unlikely ascension. Lucky I was.

I had a supportive spouse, Barbara Beachley, who was just as excited about the bar as I was, and the secret weapon of my childhood friend, Rob Pannell (you might know him as PAX from his unbeatable high scores), who contributed endless sweat and powerful game-fixing kung fu, not to mention the indefinite loan of his beloved cockpit Sinistar arcade game.

A cascade of serendipitous events followed. I met Miranda Brewer on Twitter in my somewhat pitiful attempts to drum up interest in the bar on social media prior to its opening, and she became 1984’s first employee/bartender/booster, providing the bar with its original cast of regulars in her wonderful friends and family.

Needing a helper with brawn and a trailer, I answered an ad on Craigslist and discovered beloved bartender and elite teller of tall tales, Josh Clark, in the wilds of Elkton, Maryland, and a bromance for the ages ensued.

For the meager price of untold pints of Dogfish Head 60 Minute chased by the occasional Pabst Blue Ribbon, wild-haired local rocker Sean Flynn brought our walls to life with his cartoons-on-acid interpretations of heroes—both obvious and obscure—from the worlds of comic books, science fiction and fantasy films, classic console and arcade games, and rock martyrdom. His inspired art instantly added to the bar’s growing mystique. 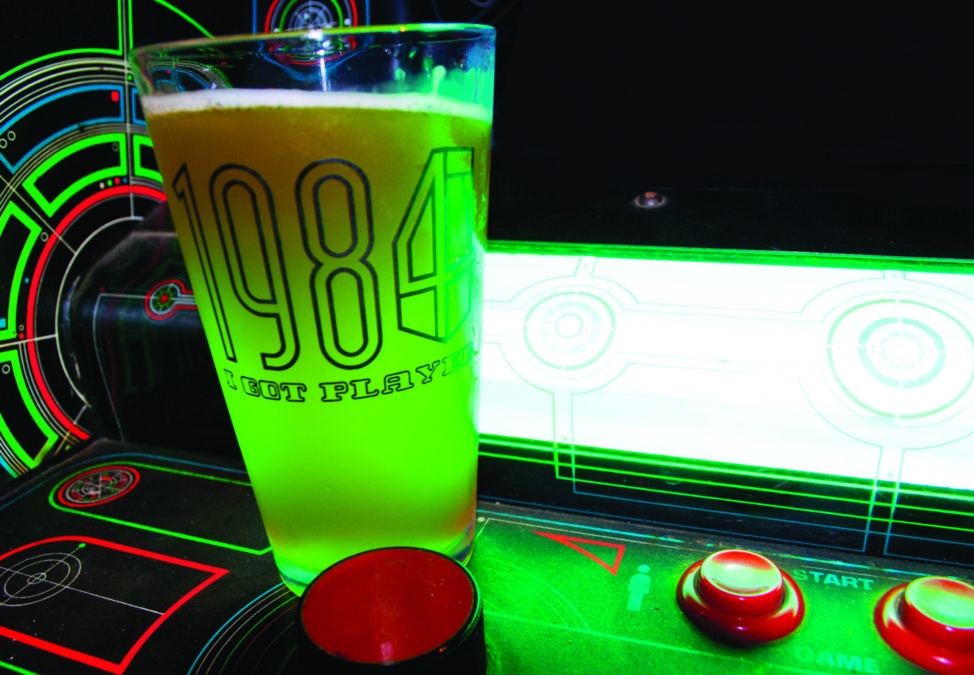 And seemingly out of the void, a hero materialized in Andrew Ratliff, the P.T. Barnum of karaoke hosts, whose magnetic personality and tremendous falsetto propelled our wildly epic Thursday nights. The Fates were kind and 1984 thrived, though modestly, for years.

A forgotten piece of 1984 lore is that it initially had no live music and no stage. Despite being a passionate music geek, I was intimidated by the daunting task of proper execution of a music venue, both economically and practically. Though cool as Fonzie, arcade games are heavy, cumbersome and temperamental, making it hard to imagine a proper arcade and a legitimate rock show coexisting peacefully in the same limited space.

But as in all things, necessity proved to be the mother of invention, and during an extended sophomore slump, we relied on the adage “build it and they will come.” Fueled by beer and pizza, we (or rather “they,” as in the surprisingly handy 1984 team as I unhandily provided world-class moral support) raised a corner stage whose durability belied its rapid assembly. Live music quickly became central to 1984’s identity, and the arena where we made the most enduring and personally satisfying contribution to the local community.

At first, I only knew what I didn’t want to do musically, and sometimes that’s enough. It seemed redundant to build a stage and cobble together a semi-pro sound system only to have the usual suspects perform tepid acoustic versions of Matchbox 20 hits and classic rock covers as background music (though that stuff is not without its time and place). This coincided with it becoming increasingly apparent that the bar’s role in the social fabric of Wilmington was as an alternative to the typical, and that my true job was to counterprogram against the rather monotone options that the more popular watering holes in town offered. 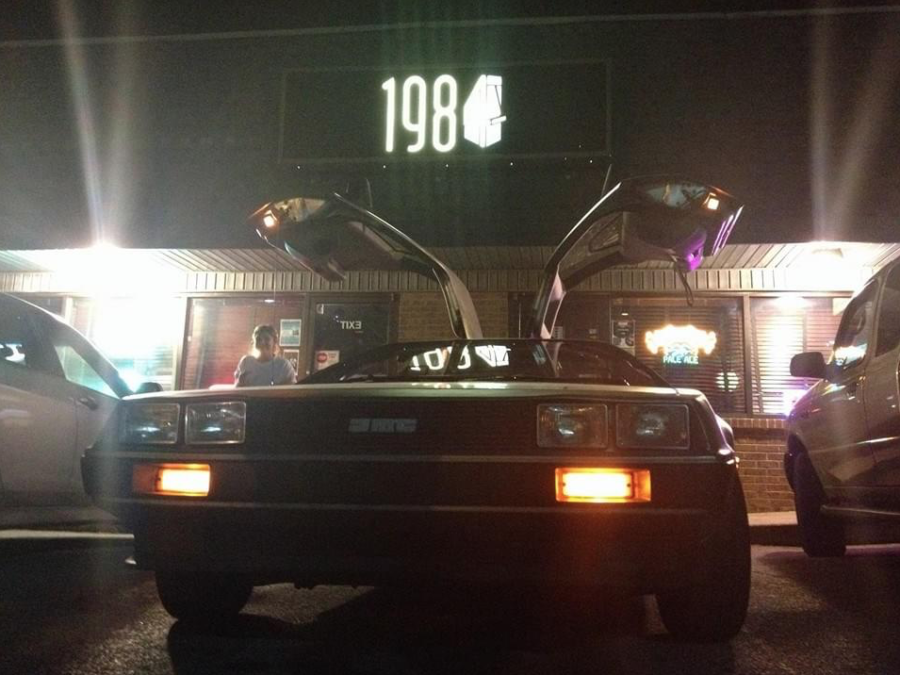 Drawing on my own background in the indie rock world of D.I.Y. venues and basement shows, I settled on the classic formula of three bands for five bucks, focusing primarily on local, original bands with a sprinkling of regional and national touring acts. Once word spread that your band could: play loud (and they did), get drunk for free (and they did), and, incredibly enough, actually get paid (even if your post-hardcore side project cleared the room), 1984 became the unofficial clubhouse of Wilmington’s music and arts scene. And our too-large-for-the-room square bar, served as its roundtable.

As all sentient beings know, change is cruel, painful, sometimes completely necessary, and above all, inevitable. In my time in Delaware, I’ve been divorced, lived in seven places, gone from flush to broke and back again several times, and repeatedly considered fleeing the Small Wonder due to homesickness for my hometown of Richmond (Va.) and the moral exhaustion of the ephemeral highs and soul-crushing lows of the bar business. 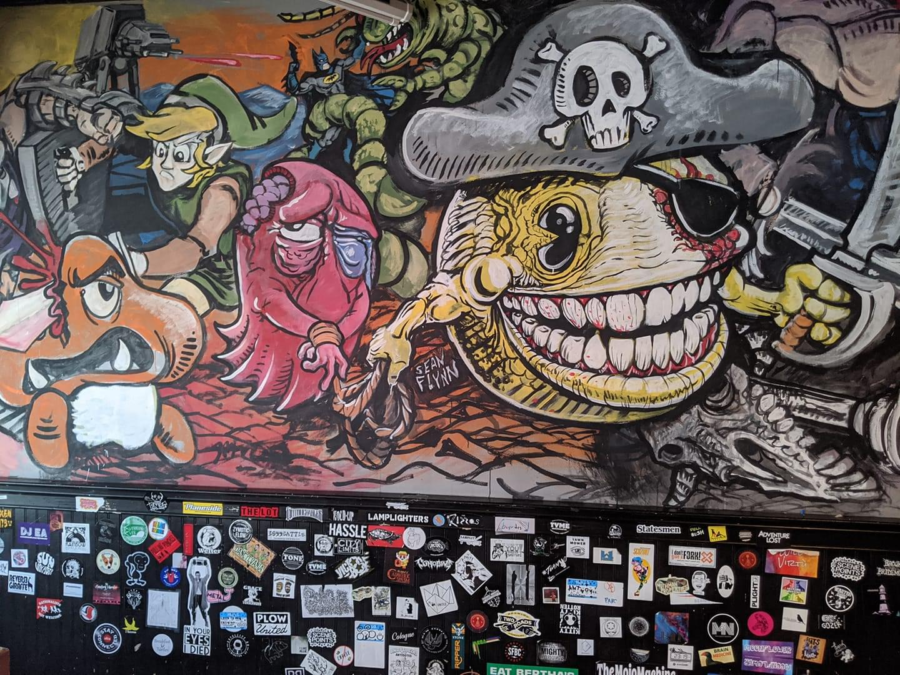 The bar shed its casts of regulars and bartenders several times over the years, always requiring new blood and shiny new skin, but that’s how things move forward and is simply the way of many things. These changes led to the adding of two partners to the mix in the bearded Mikes, Ceresini and Mahon, without whom the bar would have lasted half as long. Their common sense and fresh eyes were crucial and needed. A new crew of bartenders became just as beloved and familiar as the old in the forms of Southern gentleman and band ambassador, Dan Richmond, the short shorts-wearing Ryan Bartolo, and the indescribable man known as “Chupka.”

However, there was no way to anticipate the length and severity of the nearly-biblical cruel twist of fate that was and sadly is COVID-19. After the most successful winter campaign in our history, we’d never felt better about the future of the little-bar-that-could. We were planning excitedly and creatively for the spring and summer of 2020, with a Friday the 13th punkfest and an all-day stoner rock festival on the immediate horizon.

Then, quite suddenly and completely unceremoniously, we were, in a word, done. I worked a solo shift on the Saturday before St. Patrick’s Day and never again. And rest assured, due diligence was done. All of the long, drunken meetings, hand-wringing, planning and replanning, attempts at obtaining government financial relief, and endless debates about the merits of crowd-sourcing, happened. There simply was no path forward for us.

But as always, there’s hope. This dark chapter will pass as they all do, and personally, there’s a certain excitement and freedom in the forced rebuilding and reinvention. The wounds are healing in no small part from the outpouring of love 1984 received from customers and bands alike when the news of our closure was announced. We’ve all been comforted by the knowledge that we made an undeniable and lasting contribution to the place we call home, facilitating the creation of indelible memories and lasting friendships while we made our own.

I had some of the greatest nights of my life at 1984: the various Halloween tribute band nights that we called Rawktoberfest; 2019’s bar anniversary ‘90s party featuring our friends, MEGA, and seemingly all of the local music community; the Sunday afternoon Plow United reunion show; the list goes on forever.

Thanks to all for the memories. And to all who have asked if it was worth it, the answer is a simple and emphatic: Hell, yes.