The baby bird’s name was Alex.

“Oh, my God!” I yelled at my dogs after the incident. “We’ve killed Alex!”

My two dogs just stared at me blankly for a moment, then immediately returned to chasing each other in the yard.

Alex had hatched just a couple of weeks earlier in the nest atop the light fixture above the back door of my house. I imagined the birth as a serene scene: golden sunlight shining down; Mama Dove proudly admiring her progeny; and Sir David Attenborough narrating the event from behind a nearby tree.

The nest had been there for years, serving as the birthplace for several other birds. For some reason, this time around, I’d taken a keen interest—even going so far as to research and purchase birdseed. I didn’t think birds held baby showers, but I hoped the gift was appropriate. It was, at least, gender neutral.

My focus on Alex probably had something to do with the article I’d recently come across. The headline read: “North America has lost nearly 3 billion birds since 1970.” And no, it wasn’t a matter of people simply misplacing their parakeets. Bird species were going the way of the 8-track tape.

The article presented a macro view of the problem, but in the meantime I had a micro view right in my own yard: Earlier in the summer, it appeared that Mama Dove had simply bolted just weeks after another one of her chicks had been born. I feared that she had developed a case of cold feet and ditched the poor thing. God forbid she should do it again to our Alex!

My concern prompted me to call one of Out & About’s clients, Charles Shattuck, owner of Wild Birds Unlimited in Hockessin.

After gently laughing at the idea of a mother bird leaving her young, Shattuck asked me how much I knew about mourning doves.

“Charles,” I assured him, “Please feel free to talk to me as if you were certain I knew less about birds than just about every person you’ve ever met.” 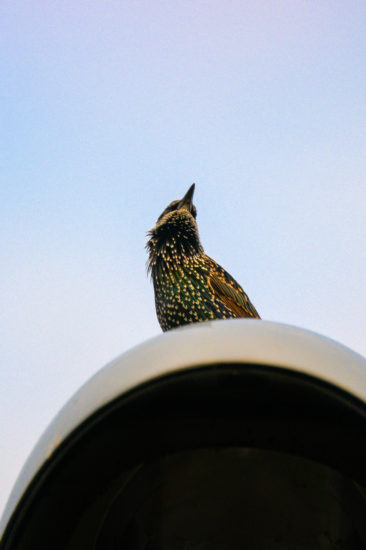 He responded by explaining that when their infants are age-appropriate, a mother mourning dove will leave the nest and “shadow” her young from nearby, in the hopes that the tactic will eventually encourage flight.

Basically, it was Mama Dove’s way of saying, “Look, you’re two weeks old, already. It’s time to go out in the world and get a job.”

Then Charles posed a set of questions. “What you should ask yourself is: Why did that bird choose you? What in the mother’s eye made your yard a safe place to raise her young?”

I suggested that it could be my eclectic taste in music. But Shattuck was thinking of more environmental factors. In particular, he pointed out that Delaware’s protected lands offer a suitable habitat for many species of birds—nearby places like the former du Pont estates of Longwood Gardens, Winterthur and Mt. Cuba. Or our area’s state parks. And places like Bombay Hook, Prime Hook and Cape Henlopen down south.

“A lot of other states on the East Coast don’t have those kinds of protected lands,” Shattuck said. “In fact, if you go to some parts of Europe, they don’t have any songbirds. They’ve overdeveloped so much, there’s few habitats for songbirds.

“We’re used to waking up in the morning and hearing the songs of birds. There, you hear nothing.”

My mind pictured in stark black-and-white a set of dark cobblestone alleys in some formerly occupied Soviet territory. No sounds of birds at all, just the sorrowful whistling of a lonely street cleaner sweeping in the distance.

Back at the house, I discovered that Mama Dove had flown the coop, leaving Alex looking as bewildered as a two-week-old mourning dove could possibly look. All by herself/himself.

I scanned the surrounding area for where Mama could be staked out, “shadowing” her chick, as Shattuck had called it. Who was I to second-guess millions of years of evolutionary success?

Later, I would ponder what he had said about Delaware being a unique place for birds on the East Coast. I spoke to another local bird expert, Sally O’Byrne, who’s been involved with the Delaware Ornithological Society (DOS) since the early ‘90s, serving two terms as the organization’s president. She’s also been a naturalist at Delaware Nature Society for more than 30 years, conducting a variety of classes on birds.

Then she said something I’d never heard anyone say about our area before: “Delaware is very important as a migratory flyway. The Delaware Bay is recognized as being one of the most important corridors in the world for the movement of birds.”

Speaking of the movement of birds, picture a baby bird’s first flight: the literal leap of faith it takes to bound from the nest and into open space, its instinct driving it to flap its little, hopeful wings in an effort to become airborne and touch the sky.

Now picture a knuckle-headed reporter pulling his car into the driveway, thoughtlessly letting his dogs out of the car, and having one of them jump up at Alex, who possibly had just taken that first leap from the nest.

That knucklehead—me—then witnessed the tiny creature fly dangerously close to the front paws of my leaping, overly-eager Mini Doberman.

Did I just watch baby Alex get its wings clipped?

It was close, but Alex landed immediately in my neighbor’s driveway. That’s when I yelled at my dogs, who of course were only momentarily concerned. My mind went into overdrive. Certainly a broken wing for a baby bird spelled C-A-T-F-O-O-D—in no uncertain terms.

I felt responsible. Without many options, I went inside with my dogs and returned with birdseed. Alex was still there. I put the birdseed up on a ledge by my garage, thinking that if Alex could fly, maybe that would incentivize her/him to seek higher ground. Eventually, I drove to work, leaving Alex just sitting there in my neighbor’s driveway.

Delaware In The Spotlight

“More than in some other places, Delaware has a real awareness of birds and birding,” O’Byrne had said proudly. “We have a Division of Fish & Wildlife that is very involved with birding. We have one of the most active bird clubs—DOS is an incredibly active bird club compared to a lot of others in the nation. The American Bird Association, a national birding organization, is centered in Delaware City. That’s its headquarters. We have national attention coming to Delaware.”

Over the next few days, my attention was on Alex. As I came and went from my house, I regularly found the innocent chick under a tree in a protected corner of my yard where my neighbor’s house and mine meet. I had not seen it fly and had no idea if it could. 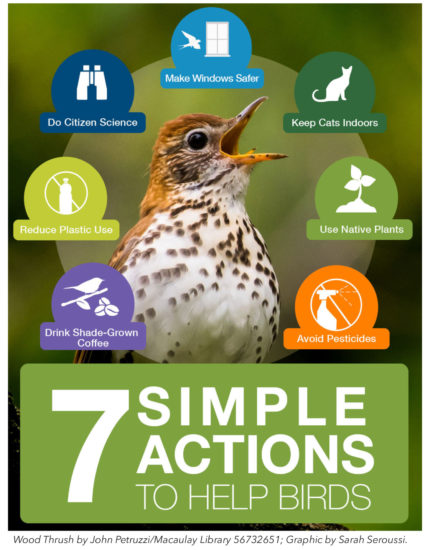 When releasing its latest report on the decline of North American bird populations, Cornell Lab of Ornithology included these everyday tips that you can follow to help encourage repopulation efforts.

I would be certain not to let the dogs roam free; I left birdseed out when I could; and scared off the neighborhood cats that I saw circling the vicinity.

Simply put, I didn’t want to see Alex die. And in this process, I feel like I too was taking my first steps into a bigger world. Maybe I was becoming a birder. Or at least a bird lover.

“Birding or appreciating the natural world is a way for us to unplug in a structured way,” she said. “There are so many demands on our attention these days. We can deepen our appreciation of the natural world and finally look at something that’s not trying to sell us something. We can get out of our phones.”

I remember the moment I saw Alex fly. Once again, it was under the same tree. I offered some birdseed, but off Alex went, up into the air. It felt great.

I haven’t seen Alex since, but I’m thankful we had those few stressed and misunderstood moments together. Nowadays, I like to think of Alex flying high above the landscape—having no immediate agenda—the sun warming its wings on its lofty way to wherever instinct or the next adventure calls.

As for me, I’m looking at Delaware and its relationship to birds in an entirely new light. Our state has been known for its beaches, and lately its beers. Maybe it soon will be even more well-known for its birds, too.

The possibilities have put me in an optimistic mood. I feel like I’ve experienced an awakening of sorts, as if someone just let me in on a big secret.

Perhaps you could say a little bird told me.