It’s probably difficult for today’s kids to understand how important Stormin’s Classic basketball league was to yesterday’s kids. Thirty years ago, reputations and sometimes even careers were determined by how well they stood up to that summer-time competition. The players back then knew they would be playing against the best from the city and beyond. And they knew that everybody would be watching.

Now, 20 years after it ended, the Stormin’s Classic basketball league is back in the news, as the man behind the league, Norman Oliver, has put together a committee to select a Hall of Fame from the Stormin’s Classic’s glory years, 1980-2002. The inductees will be honored at a ceremony on September 29 at the Chase Center at the Riverfront (inductees list at OutAndAboutNow.com/read page 22). 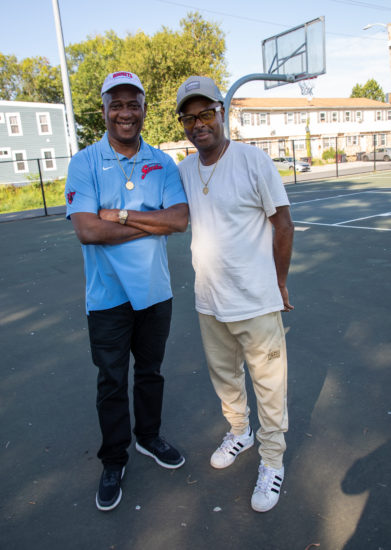 Rivers, a childhood friend of Oliver’s, was legendary in the News Journal’s sports department for his passion for local basketball, and his dedication to keeping records and statistics bordered on the fanatical. Rivers, who died in 2005 at the age of 43, really put Stormin’s Classic on the map with his coverage of the league’s annual draft, which eventually became so big that it was broadcast on a local cable television station.

“That’s all anybody would talk about — who are going to be the top picks in the Stormin’ draft,” Brown says. “Around here, it was bigger than the NBA draft. And it’s all because of the coverage that Aaron gave it in the newspaper.”

Frawley was also a passionate basketball fan and even played in the New Castle County recreation league. In fact, Frawley was playing in a NCC rec league game when he had a fatal heart attack in 1994 at the age of 50, after he had left office.

When he was mayor, Frawley gave Oliver the city’s support and stamp of approval, which enabled the fledgling league to play in better venues and not just on neighborhood courts. Frawley even sponsored a team in the league, which led other politicians to do the same, including Tom Carper, Mike Castle, John Carney, Jane Brady, James Sills and Bud Freel.

“Dan Frawley’s involvement was crucial. He gave us stability and credibility,” Oliver says. “He promised he would help us and he kept that promise. He jumped right on board, and Dan Frawley was one of the cornerstones of the league.”

Another cornerstone of the league was Oliver’s insistence that kids who played in Stormin’s Classic also focus on their education and involved in their community. It didn’t matter how good you were on the court — if you didn’t deliver in study hall or take part in the latest community project, you weren’t playing in the Stormin’s Classic.

“We wanted to have an impact on these kids’ entire lives, not just their basketball lives,” Oliver says. “That’s why we made sure that a big part of the league was its education program and its community service program. That was especially important for the African American kids, especially the 9- to 15-year-olds. They’re the most vulnerable.”

Stan Waterman has been a successful player and coach in Delaware for decades. He was an all-state selection at Howard High, played at the University of Delaware, then coached Sanford School for 30 years, where he won more than 500 games and eight state championships. Today, Waterman is getting ready for his second season as head coach at Delaware State University, but he still fondly remembers one of his first coaching jobs — in the Stormin’s Classic league.

“The excitement and the energy it generated every summer was special,” Waterman says.

But to Waterman, what really made Stormin’s Classic special was what happened off the court, which had a bigger impact on young lives than what happened on it.

“The competitive component, the basketball component, that was one thing,” he says. “But there was that academic component, that service component about that league that went a long way to providing a lot of structure and discipline and opportunity for kids growing up in the city.”

The league continued to grow until it became too big for Oliver and Brown, and they eventually turned the league’s mostly volunteer operations over to others. By that time, girls’ leagues had started and Stormin’s Classic had spread to Middletown, Smyrna, Dover, Georgetown and Seaford. A league that started with 54 boys playing at a city park (shirts vs skins) ended up with 120 teams and thousands of participants. And its championship game moved to the bright lights of the Bob Carpenter Center at the University of Delaware.

The sad irony, however, is that the league Norman Oliver started when he was a freshman at Delaware State University — when most college students are more concerned about the next frat party than starting a program for inner-city kids — became so successful it failed. It was simply too big for a volunteer operation to manage.

“That was hard to accept at first, but we understood the reality of the situation,” Oliver says. “We were and still are proud of what we created from basically nothing. And I think the thing I’m most proud of is the fact that we brought together kids from the city and the suburbs, kids from Howard and Sallies and St. Elizabeth and Delcastle. They worked together and played together and showed that people from different backgrounds can get along if they get the chance.”

And those memories of the glory days of past summers don’t fade away; if anything, they get stronger as the kids become adults and have their own kids.

“It’s like a fraternity,” Waterman says. “Those guys developed life-long relationships. Guys won’t see each other for 15-20 years, but if they run into each other they’re going to talk about the times they played with or against each other in the Classic. They have a bond that lasts their entire lives.”

– View the List of Inductees at: OutAndAboutNow.com/read page 22). For tickets to Stormin’s Classic Induction Ceremony on Sept 29, visit: StorminsClassic.EventBrite.com

Bringing Down the Curtain

Fall (Back) Into the Arts