It’s not every day that up-and-coming fashion designers get contacted to show their collections during New York Fashion Week. That’s why when Wilmington designer Sara Crawford received an email late last year to do just that, she thought it was a joke. 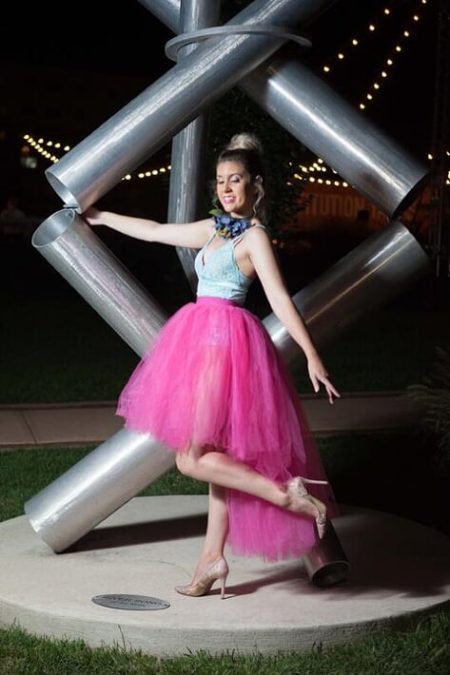 Crawford’s fun and flamboyant tutus have become a signature item

The email came from AMG Group, which was hosting a special show during fashion week that would feature several emerging designers.

“I was reading the email when I was on the phone with one of my friends,” says Crawford. “They were excited, but I was still trying to process it.”

She thought about it for a few weeks and finally agreed to participate around Thanksgiving, which gave her less than two months to put together her collection. She focused on women’s wear for the collection, even though she also designs clothing for men and children.

“During Christmas I was out running around, working on my collection for all of two months,” she says. “I created a whole new collection. I took time off of work (she is the program director at True Access Capital, a not-for-profit, federally certified, Community Development Financial Institution that supports small businesses and community development projects) and had a lot of late nights.” Laughing, she says, “I am no longer built for these all-nighters.”

She put together 10 looks for her Anara Original label and titled it “The Pigment Collection.” It featured muted colors but with lots of texture and embellishments. Although she is known for her fun and flamboyant tutus, she chose a pastel palette to bring awareness to her albinism, a rare genetic disorder.

“I wanted it to speak to the woman who loves classic but who still loves to stand out,” she says.

Crawford graduated in 2005 from The International Academy of Design and Technology in Tampa, Fla., where she studied fashion design and marketing. She also started her label in 2005. She moved to New York after college, where she worked for fashion icon Tommy Hilfiger.

But, she says, “the cost of living was just too high. I was just working to pay bills.”

The New Castle native returned to Wilmington after two years in The Big Apple and continued designing in her spare time. But when it was time to return to New York for the fashion show, she spent less than three days there. She arrived only one day before the fashion show and fitted all her models that day. She says it seemed as if she blinked and the runway show was over.

Crawford says her “Pigment Collection” is for the woman “who loves classic but who still wants to stand out.

But she received promising feedback from those in attendance. “Most people said it was very polished and whimsical and had a power to it,” says Crawford.

She left New York the day after the show, but she made time to visit some of the clothing factories and check out the apparel production process. She also enjoyed meeting some of the other up-and-coming designers.

“There was a young lady from Milwaukee and one from Orlando who were really great designers. It was great to hear their stories while we were waiting around,” says Crawford.

Back home in Delaware, she found that the show generated an influx of online orders, especially for her custom t-shirts, which display slogans like “Dress Responsibly” and “ICON Be You. Be Original.”

“I was getting contacted after the show and I didn’t have any stock! It’s hard being a one-man-band and having a full-time job,” she says.

Not long after the runway show, The Oxford School of Fashion in London contacted her to put together a collection for London Fashion Week. She’s also researching the companies that reached out to her to work on garments.

“Collaborations are golden,” she says.

“[The exposure] will invoke more inspiration and get me back in that saddle,”

“To be a designer you don’t have to have a store,” she says. “I love being a custom designer because it’s a little more controlled.”

She says since the onset of COVID-19, she has been working on a t-shirt collection inspired by her albinism. She is launching the new collection soon, which will feature t-shirts with statements and slogans on them challenging you to embrace your differences. And while many retailers had to pivot from storefront to online sales, Crawford says she was already ahead of the game. “My business was already in the virtual space, so if anything, the virus enhanced my visibility because everyone is hanging out online,” she says.

Who are some of her dream clients? “I would love to dress [actress] Tracee Ellis Ross, [singer] Janelle Monae and [actress] Sarah Jessica Parker. They are all fun and classic,” she says.

Crawford realizes that although this exposure has been great for her career, she is not going to immediately become a world-renowned fashion designer. But she is more determined than ever. “[The exposure] will invoke more inspiration and get me back in that saddle,” she says.

For more information and to shop, visit anaraoriginal.com.