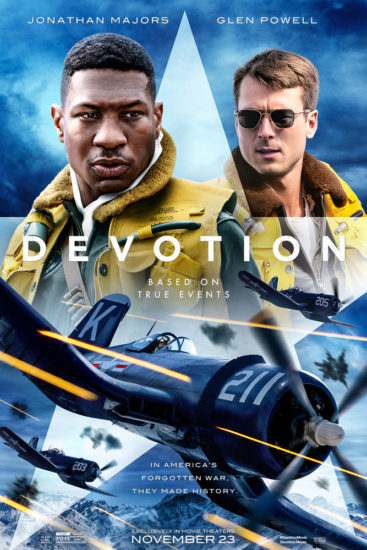 Regardless of its true-story provenance, a savvy filmgoer can map out the major plot points of Devotion with little effort. We have seen this movie before…several times. But despite its predictability, Devotion is nevertheless a solid and satisfying film experience. Jonathan Majors (Lovecraft Country) and Glen Powell (Top Gun: Maverick) co-star as Jesse Brown and Tom Hudner, two naval fighter pilots and wingmen during the Korean War. Because Brown is African-American, he has had to work especially hard to gain his first-ever pilot status and he shoulders the burden of expectations and prejudices of those around him. Hudner has risen to his station with great skill but far fewer obstacles. Given the differences and especially the time period, theirs is an unlikely friendship, but a convincing one thanks to the subtle, effective acting of Majors and Powell. Majors again demonstrates a powerful screen charisma as seen in Lovecraft Country, The Harder They Fall, and Loki; he is a performer to keep an eye on.

From the Publisher: I Don’t Know, And That’s A Fact!