The French comedian will perform at World Cafe Live at The Queen on Feb. 7

Chances are you haven’t heard of Gad Elmaleh. And he kind of likes it that way.

At least for now.

“It’s refreshing,” says Elmaleh of his newly discovered privacy here in the United States. “To just stand somewhere and stare at people with nobody recognizing me, it’s great. Because I get to live the situation, and to experience it, and enjoy it.”

After more than two decades in comedy in France, and with several TV shows and 22 movies to his credit, Elmaleh took the biggest chance of his career: He moved to America.

Here is a guy known as “the French Jerry Seinfeld”; who broke records by selling out L’Olympia in Paris seven weeks in a row; who was awarded the Chevalier des Arts et des Lettres by France’s Minister of Culture. And he’s essentially starting over at age 45.

“I worked very hard on the English,” Elmaleh says during a recent phone interview, his voice revealing not only a French accent, but an animated eagerness and, at times, a sober earnestness. “Two years ago, we couldn’t have had this conversation.”

A stranger in a strange land that keeps getting stranger with every passing day, Elmaleh is currently on tour and will be playing World Cafe Live at The Queen on Tuesday, Feb. 7.

“I want to do stand-up,” Elmaleh says. “And what you get from this experience—mentally, physically, emotionally, everything—it’s very hard to find this, and retrieve this, and get this with the cinema. It’s a ride, doing stand-up, a crazy ride [with] risk and pleasure and disappointment and fear and anxiety and reinvention and trying every night.

“Starting over is a big challenge.”

Here, he discusses his passion and why he did what he did—leaving great success behind in his homeland.

O&A: What has been the biggest obstacle for you in coming to America to do comedy, other than having to learn the language?

Elmaleh: I think the language is really not the main thing. Obviously, it’s very hard, and you have to write and translate. And talk in English every day with Americans. And watch TV and [understand] it.
But the really shocking, surprising thing [is playing comedy clubs] unannounced. They have no idea who’s going to be there. It’s just 100 percent Americans who have no idea: “Who is this guy with the weird name trying to do jokes in English?”

And the great thing is I feel I need to earn those laughs. It’s not only that I feel—I have to. Because if I’m not funny there…they’re not going to be nice to me or be like, “Oh, he’s traveling from France, let’s give him a break.” And I love that. It’s a good thing. But it’s also very hard. Because when you bomb, you bomb seriously. It’s humbling.

So when I perform in front of 12,000 [in France] and then I go to the Comedy Cellar in New York in front of 100 people who have no idea who I am, it’s a really, really big challenge. And I love it. 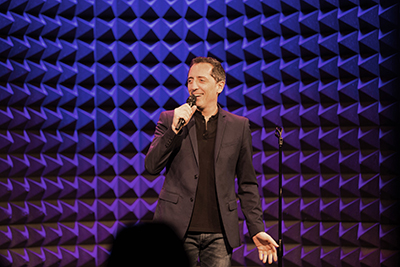 O&A: When you were on the Jim and Sam Show [featured 8-11 a.m. on Sirius 206 and XM 103], Jim Norton—who has 26 years of experience in comedy —was talking about how after a bad show he questions himself. And this is a veteran comedian questioning himself. Is it like that?

Elmaleh: You know, it’s both. Because I have this thing in the back of my head all the time that says you have nothing to lose. What’s the worst-case scenario? “Oh, that guy with the bad accent was not funny?” It’s okay. It doesn’t matter. It’s a little painful. But it’s not that bad.

Just go home, and I write and rewrite. And listen to my sets, because I record every single set. But I’m lucky that I already made my career in France and made my money and earned my life and had my kids and all that. If I had to struggle and make a living with the standup comedy in the U.S., starting over, I would die. It would be impossible for me.

Elmaleh: I think it’s kind of lazy to compare people. But it’s good when they compare you to the right person, the person you admire. I do observational comedy…And [Seinfeld and I] have been connected even before we met. Then we became friends, and I went on his show, Comedians in Cars Getting Coffee. I open for him often. I travel with him. He comes to Paris sometimes, and performed in Paris in English one night, which I helped arrange.

I always say as a joke, and also to him, that they can compare me to Jerry Seinfeld the day that he performs an hour in French.

O&A: What was that day like, when you did Comedians in Cars Getting Coffee with Seinfeld? It looked like you had fun. Had you two met before that?

Elmaleh: Yeah, we were friends before. He was really interested in my challenge. He doesn’t understand why I need to come to America to do this. He always makes fun of me and says [in animated voice], “It’s like if you say, ‘OK, I’m going to go to Italy and start a pasta factory, and then I’m going to go to Germany and start building cars!”

And he’s making fun of me and he says, “You know it’s standup comedy. You’re from France. You should stay there.”

O&A: You were in the Woody Allen movie Midnight in Paris. You played the detective. And a theme in that movie was that people kept looking back in the past for a golden age. Everyone was looking back into the past. That said, when was the “Golden Age of Comedy” for you? Were there comedians that inspired you? Or would you say now is the best time for comedy?

Elmaleh: It’s funny, because I’ve been inspired as an artist not only by comedians. And it’s really interesting how you can be inspired by different role models that are not necessarily comedians.
The shock that I had when I saw Charlie Chaplin, when I was a kid. And the movie was The Kid. I was a little boy in Casablanca, Morocco. It was a shock. It was really an important moment for me.
Also, I don’t know why, but I also immediately thought of Frank Sinatra. I don’t know why. When I put on a song from Sinatra, it’s not only the music that I hear, I hear a whole time. A time, an epoch, a way of life.

There’s a whole atmosphere. There’s a whole environment. And if I could go back in time, I would really love to attend one of his concerts, and hang out with him, and [see] him hang out with the Rat Pack. There’s something really classic that I’m nostalgic about. Maybe I’m just getting old, but that’s what inspires me.