Delaware Theatre Company (DTC) again collaborates with playwright/director Joshua Ravetch (who also penned Go Figure!, presented at DTC two seasons ago) for his new piece, One November Yankee. It’s a tale with one plane and two actors, entwined in three stories. The title of the play comes from the call letters on the plane’s tail: “1NY.”

L.A. Law’s Harry Hamlin and Hart to Hart’s Stefanie Powers star in the production, playing three sets of siblings whose lives are interwoven by the aftermath of a plane crash. “These are three stories that touch one another in unexpected ways,” says Ravetch.

Powers and Ravetch are long-time friends (his father was her junior high English teacher), and he essentially grew up around Powers’ career. A mutual friend, the actor Robert Forster (who sadly passed away last month), told her about Ravetch hosting play reading nights at his home, and there they reconnected. (Interestingly, Forster did the original workshop reading of One November Yankee.)

Ravetch initially mounted the production in 2012 in a 99-seat theater in Southern California. Hamlin performed in the premiere, joining the cast just eight days before the first preview.

“I saw it when Harry did it previously, and I thought it was most unusual and really fascinating subject matter,” says Powers.

“It’s always a great opportunity to try out new work,” Hamlin says. “I’ve done a lot of revivals, but new plays really get me. I love to create something brand new.”

Originally, Ravetch sent Hamlin’s agent the play, and although it wasn’t immediately passed along to the actor, Ravetch was persistent, and Hamlin eventually read it.

“When I finished it I thought, ‘Wow, this is an amazing play,’” Hamlin says. “It’s so unique, and it says so many different, wonderful things in such a compact space.” As modern technology would have it, Hamlin ended up connecting with Ravetch through LinkedIn.

Playwright Ravetch studied with legendary acting teacher Stella Adler. Late in Adler’s life, she and Ravetch attended a spate of plays together…and every one took place in a living room. Ravetch recalls Adler turning to him at the last play and saying, “Promise me you’ll never put a play in a living room!”

“She understood that the ‘place’ is the play—the poetic canvas where the ideas unfold and live,” he says. “Audiences come from their own living room to see a performance…why can’t we make it more interesting? I was delighted by that notion.”

On that track, Ravetch says he usually starts writing with a place in mind. “I’m interested in surprising an audience with something they’ve never seen before,” he says. “It’s exciting for me when I walk into a theater and the place is already thrilling and provocative and visually interesting.”

His vision is definitely realized in this set, whose center is a striking piece—a sizable, crumpled, bright yellow Piper Cub, upended in the middle of the stage—created by designer Dana Moran Williams.

Ravetch wanted to write a piece with flight at the center. A private pilot himself, he loves the beauty, poetry, science and romance of flight. Coincidentally, Powers is also a pilot, and Hamlin previously studied for his license. 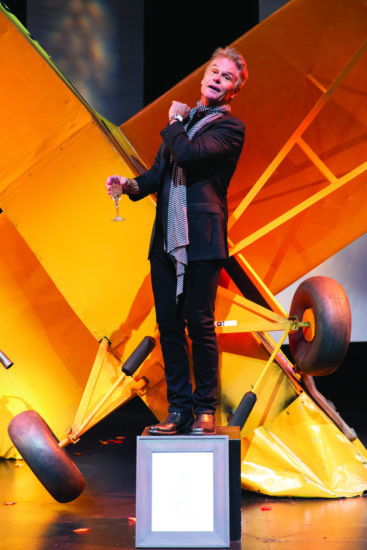 Both Ravetch and Hamlin note the play’s content hasn’t changed much since its premiere. Powers, meanwhile, is new to the part (Loretta Swit previously starred in the role). “Having Stefanie do it gives a different voice,” says Hamlin. “And, I have to say, it’s fantastic. She brings a lovely, funny depth to the role.”

But both agree One November Yankee is original and amusing. “There are a couple of moments in the play that are just really funny,” says Hamlin. “There have been times we’ve been rehearsing when we’ve said the words and just cracked up.”

Hamlin and Powers are both classically trained character actors “…planted in leading role bodies,” as Hamlin says of this production.

Ravetch agrees, referring to one of Powers’ roles as a museum curator in the play. “Nobody has more of a sense of style and elegance and sophistication,” he says, “and it’s difficult to ‘act’ those qualities if you don’t already have them swimming somewhere in your mettle.

“And Harry is basically a character actor in the body of a leading man. He’s quirky and unexpected; he has to play an artist as well as two very different characters, and his willingness to not be a leading man makes him so interesting.”

The Writer as Director

The actors aren’t the only ones juggling multiple roles. Ravetch is both writer and director of One November Yankee. “It’s unusual to have a writer direct as well,” Powers says. “Sometimes, the writer has more emphasis, and sometimes the director has more emphasis, so it’s a balancing act [for Josh].”

Does she prefer one “hat” over the other? No, it’s just a unique experience, she says. “But Josh is extremely generous as far as protecting the integrity of what he’s written.”

“It would actually be harder for me to write the play and sit on the sidelines while someone else directed it,” Ravetch says. “I directed plays before I began to write, and for me it seems like one job. I get the idea, I buy the paint brushes and the canvas and the paint—it doesn’t make sense to me to hand the brushes to someone else.”

Delaware Theatre Company Executive Director Bud Martin initially met Ravetch through a mutual friend, and the playwright’s style resonated with him. “His characters are often complex, and I love working through or ‘unpacking’ that,” says Martin.

Martin says two things attracted him to this particular work. He’s always interested in the “art imitates life, imitates art” discussion. Also, there are six characters desperately seeking acceptance and connection. “Growing up in a very large family, sibling dynamics have always been of interest to me,” he says. “The inability to talk to each other about what was wrong and often not be heard has such lasting impact, and I love how those relationships ultimately resolve.” But, Martin notes, when Ravetch told him Harry Hamlin and Stefanie Powers wanted to do the show, “…that was the icing on the cake.”

One November Yankee is running at Delaware Theatre Company now through Sunday, Nov. 10. Tickets start at $29 and are available at DelawareTheatre.org or by calling 594-1100. 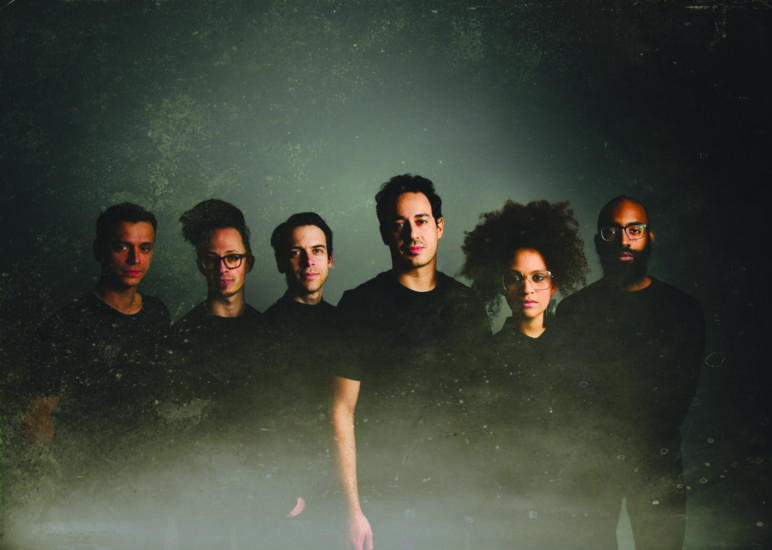 “Our music stems from West and North African rhythmic traditions—Fela Kuti, Salif Keita, Oum Kalthoum and many more,” says Boularès. “But we also bring a lot of our individual experience as musicians: Michael plays guitar with Brazilian singer Seu Jorge; I tour with Haitian legends Tabou Combo, and Sarah is one of Christian Scott’s protégés.” The sum of it all, he notes, is an upbeat, eclectic brew of jazz, soul, African rhythms and indie rock.

Appearing at Christina in May 2018, Ajoyo happily returns to downtown Wilmington for a repeat performance. “On tour, we tend to develop special relationships with certain audiences, and CCAC was definitely one of them,” Boularès says. Of that last show, he says the ensemble felt very connected to all in the audience—children, parents, grandparents. “[That concert] almost didn’t feel like a performance, but more like a ‘family reunion.’ Since then, we’ve been meaning to come back.”

Asked to describe the “Ajoyo experience” for those who may not know them, Boularès says: “As an emotional connection, there is some of that familial experience I referred to earlier. On and off the bandstand, we’re like a brother/sisterhood, and I think we convey that sense of warmth and sincerity through our music.”

Ultimately, he says, Ajoyo is music for the mind, for the heart, and the body. “You’ll definitely want to stand up and dance,” he says.

Tickets for the performance are $23 and are available at ccacde.org. This engagement is made possible through the Special Presenters Initiative program of Mid Atlantic Arts Foundation, with support from the National Endowment for the Arts and the Delaware Division of the Arts. 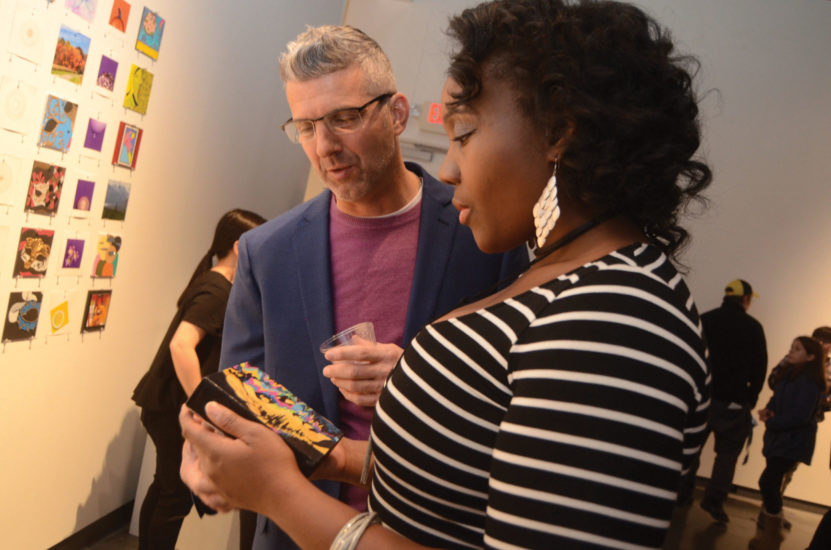 Now in its fifth year, The Delaware Contemporary’s SABA (Small Art Buying Adventure) V returns on Saturday, Nov. 9, from 6 to 9 p.m. The annual “anonymous art” fundraiser receives more than 350 submissions from local, national and international artists. Past iterations of the event have included work from artists such as Nanci Hersh, Rick Hidalgo, Gina Bosworth, Caroline Chen and more.

All of the event’s available artwork is 6×6-inches in size and is displayed namelessly, offering guests a fun, surprise opportunity to acquire works from noted artists at an affordable price point—$25 each.

Tickets for the Patron Preview (beginning at 6 p.m.) are $100, the cost of which includes complimentary champagne and the chance for patrons to view and reserve one artwork choice before the Open Party. Open Party tickets are $30 in advance or $35 at the door. The Party “opens” right at 7 p.m. with live music delivered by Milan and the Sour Goat and tasty bites served by Wilmington-area favorite Drip Café. A cash bar is also available.

This year, in order to avoid the mad rush to select artwork during the pre-public celebration, The Contemporary has added a new element to the Patron Preview: attendees will select their artwork in the order their event tickets were purchased —which means, art lovers…don’t wait to secure your spots! (Director of External Affairs Tatiana Michels assures us that the Open Party portion will still contain the requisite elbow-jabbing, art-grabbing fun.)

This season, The Contemporary also welcomed new Executive Director Leslie Shaffer, who previously served as the organization’s manager of Public Engagement and Programs. That role, she says, helped her gain an in-depth knowledge of the facility, its audience base, resident studio artists and staff.

Shaffer’s immediate goals are to facilitate reorganization of staff and implement new internal systems and procedures. Another goal is to launch initiatives to reconnect with surrounding communities “…not only through exhibits and education, but also through the manner in which they connect; how people ‘see themselves’ in art; and how they relate to artists,” she says.

Her long-term sights are set on securing the museum’s financial stability, establishing The Contemporary as an East Coast “must-see” destination, and developing projects that inspire change in the presentation of contemporary art.

Shaffer also recognized a key organizational challenge in leading people to understand that contemporary art is essential to the health of a community. “[Art] does heal and prevent,” she says, “And we must work hard to demonstrate the value and shared benefit of introducing to our dialogue new voices on culture, society, politics, and humanity through the artists of today.”

Michelle Kramer-Fitzgerald
Michelle Kramer-Fitzgerald is the owner of arts publicity company Arts in Media and manager of the blog Delaware Arts Info. She is a self-described "cheerleader" for the arts and animal rescue, a die-hard Penn Stater and a doting dog mom. She's a big fan of The Beatles, Bon Jovi, strong java and red blends, and in a parallel universe, she's pretty sure she's a writer for Rolling Stone. She and hubby Scott Fitzgerald share their Wilmington home with lovable mutt Eli.
Previous