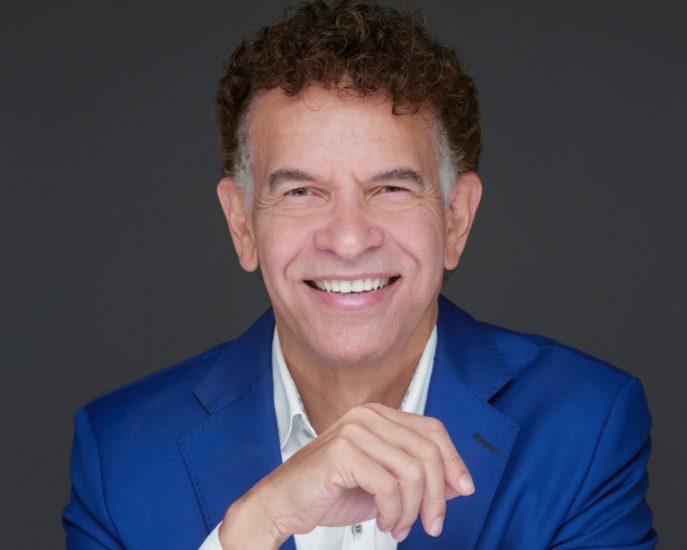 Tony winner Brian Stokes Mitchell headlines Opening Night at The Grand, an upcoming benefit for The Grand, the Delaware Symphony Orchestra and OperaDelaware.

The program, Friday, Sept. 10 at 8 p.m., was planned as a New Year’s Eve celebration in 2021 but rescheduled due to the Omicron outbreak. The organizations now call it a joint celebration of the opening of their first full post-pandemic seasons. Tickets are $75 at TheGrandWilmington.org

The first act features Viennese waltzes and polkas, “sort of a New Year’s Eve in September,” said J.C. Barker, the symphony’s executive director. Hence the inclusion of Frank Loesser’s What Are You Doing New Year’s Eve? and Auld Lang Syne.

The second act features Stokes singing seven Broadway standards for his Delaware debut, and also chatting a bit between them. This interview with him has been edited for clarity and brevity.

Your set list is There’s No Business Like Show Business; I, Don Quixote; How to Handle a Woman; Stars; Getting Married Today; Feeling Good; and The Impossible Dream. Why these songs?

Mitchell: They’re the songs everybody loves and wants to hear. I vary my choices at my concerts, and the audience at a concert like this wants musical theater. I personally sing and listen to jazz, Brazilian music, world music and other things. My taste is very, very eclectic.

But nothing from Kiss Me Kate, where you won a Tony.

Mitchell: Sometimes I include So in Love from that show. Then there’s Where Is the Life That Late I Led? It’s a song my character sings about having affairs with all these different women, and I don’t think it’s a correct song anymore.

You received the Isabelle Stevenson Award at the 2016 Tonys for work at the Entertainment Community Fund, where you have been chairman since 2004. What keeps you going with it?

Mitchell: It’s an amazing organization, consistently rated four stars from Charity Navigator, the highest rating they give. It’s because 86 cents of every dollar we’re given goes to our actual programs.

It used to be called the Actors Fund, but we changed the name because we have always served the entire entertainment community. I feel like our first 138 years were a dress rehearsal for what was to come over the next two years with the pandemic. Through our emergency financial assistance program, we generally give about $2 million to maybe 1,500 people for the most essential things they need. When the pandemic started, we’re up to about $25 million [and] about 18,000 people.

Many Broadway shows have a special performance, where everyone donates their time, and the money goes to the fund. Before the show, a bunch of us go backstage to thank them and tell them a little about the fund. Almost every time I’ve done that, somebody stops me before I leave the stage door to tell me how the fund has helped them. These stories have kept me there for so long.

You were one of 19 co-founders of Black Theatre United in 2020. What has been its most significant accomplishment?

Mitchell: The New Deal for Broadway. We got everybody together in the same room to talk about equity, diversity, inclusion, accessibility and belonging. We’re redefining how to better diversify Broadway, not just on stage, but also crew members, the businesses they work with and regional theaters as well. Once one boat rises, all boats rise.

You turn 65 in October. That’s when many people talk of retirement. How about you?

Mitchell: I love what I do. I’m still able to do it. People still want to see me do it. As long as all three things are working, I will continue.

I feel I’m getting to my best work now. I like to say that some fruit ripens later than others, and I’m one of those late ones, even though performing is all I’ve ever done. I never had to wait tables or do anything else. So it’s kind of miraculous to me.

I think I’m having more fun now because I also have discovered more about why am I here. What do I do? What’s my special thing? Why am I on the planet? That’s an important thing for all of us to look at. There’s no accident that we that are still here survived through the pandemic. Now what do we do? I’ve been basically exploring that for all of my life. I’m settling into my later years where I feel more confident about this is what I want to accomplish. These are my gifts, my skills and my shortcomings, and you just take ownership of it all.

Did having COVID change you?

Mitchell: I was one of the first people I knew that had it, and I had it again a few months ago because it was so much fun the first time. The first time, I said let me demystify this disease, because I didn’t know what to expect and nobody else did. So I chose to go public with it, and I started making posts about it.

I felt like the poster child for the business, because when Broadway shut down, I was four days from opening a show. I was set to do the movie Tick, Tick … Boom!, and it got postponed. All my concerts were postponed.

So I said to myself if somebody asked me to help out a charity, make an appearance on a Zoom call or whatever, I would just say yes. I don’t think I’ve ever worked so hard in my life. I was doing so many things, and it was also incredibly fulfilling.

It’s really been a very challenging time for anybody, especially the performing arts. We were one of the first sectors to go down and one of the last to come back.

So whenever I get the opportunity to sing with an orchestra — with people who have been out of work for two years now — it’s joyous. I wish everybody in the audience could feel the acoustic energy of this orchestra going through my body, and I get to add my two cents with my voice. It’s an extraordinary feeling. I’m also grateful to the audience, and I just hope they leave levitated and joyous at the end of the experience.

What are you working on now?

There are always concerts lined up.

I have a movie called Shirley coming out this fall on Netflix, about Shirley Chisholm.

I’m working on a new Hulu musical series called Up Here, with songs by Kristen Anderson-Lopez and Robert Lopez, who wrote Frozen and a whole bunch of other incredible things.

I have a recurring role in Run the World, for its second season on Starz.

I’ve got two albums that have been in the can forever that I need to mix down.

I’ve got a one-man Broadway that’s been in my head for years, and only in the last couple of months has it started to crystallize.

My son just got into college, so now my wife and I are empty nesters. This is like rediscovering a new part of life, but it’s also giving me this free time to do all these things.

Bringing Down the Curtain