Thanks to many partners, The Warehouse offers city teens the opportunity to develop skills, exercise, check out career options and more

With its motto, “For Teens, By Teens,” lettered under its name above the front doors, The Warehouse is a welcoming destination for kids who, for far too long, have had no better place to go.

When it opens during spring break week next month, the building in Northeast Wilmington will give teenagers from throughout the city more than just a new place to hang out. It also will provide a place to exercise, to do homework, to develop artistic talents, to investigate career options, and to develop healthy habits–all in an environment meant to be safer than the city streets where they had been spending their after-school hours.

“This is long overdue,” says 17-year-old Tyler Davis, a junior at Howard High School of Technology. “A lot of people are excited for it.”

Housed in the former Prestige Academy charter school building at 12th and Thatcher streets, The Warehouse is the first piece of the year-old REACH Riverside community initiative to spring to life. (For more on REACH Riverside, see sidebar.)

The idea for it originated with Logan Herring, executive director of the Kingswood Community Center, who recognized that many organizations, including his own, were offering supervised after-school programming for children in the elementary grades, but options for teenagers were largely limited to going home alone or hanging out on the streets.

At the start, Herring’s vision focused on Riverside, the community served by Kingswood–the northeast corner of Wilmington, the area bordered by the Brandywine on the south, the city line on the north, North East Boulevard on the west and the Amtrak line and the Delaware River on the east. Realizing that this might be more than his own organization could handle, he imagined a collaboration with a handful of supporting nonprofits.

About three years ago, he pitched the concept to Reinventing Delaware, a project of the Pete du Pont Freedom Foundation. As organizations heard about his idea, it didn’t take long for more groups to sign on. Quickly, he had close to 30 partners, and a realization that the project had the potential to reach teens throughout the city.

Momentum grew in the summer of 2018. During the 2017-18 school year, Dual School, an experiential learning project created to give low-income students a chance to develop entrepreneurial projects with a social purpose, began programming at 1313 Innovation in Hercules Plaza. Some of that first group of Dual School participants became the core team of teens that would push The Warehouse farther ahead.

Learning To Work Together

They spent the summer visiting community centers and other sites that offered services to teens. They explored Riverside, becoming familiar with their neighborhood. They figured out what was available and, more importantly, what was missing. They held focus groups with their peers to learn what teens would want in a place they could call their own.

“We had a lot of challenges,” says Khi’Aire Martin, an 18-year-old Howard senior and member of the planning team. “We had to learn how to work together, to accept each other’s views.”

“’For Teens, By Teens,’ that’s very important,” adds Anaya Patterson, a 16-year-old junior from Mount Pleasant High School. “We get to make a lot of decisions. We have input in what can happen. Just being involved is very important.”

As the concept developed, that motto took on added breadth as the teens worked more and more with adults. In the past year, they met with architects, made presentations to Gov. John Carney and the General Assembly’s Black Caucus, participated in a press conference, and met with state officials and leaders of nonprofit organizations to discuss programming ideas.

Meanwhile, Herring and his fellow organizers kept moving ahead. By January not only had they built their roster of partnering organizations to a whopping 136, but they had also raised about $8 million to get the project off the ground, with $1 million from ChristianaCare and six-figure grants from the Longwood Foundation, WSFS Bank and CSC, according to Melody Phillips, director of operations at The Warehouse. Capital One Bank, which had been left holding the mortgage after Prestige Academy shut down, donated the school building early last year.

The stretch drive to completing the project drew strong community support on Martin Luther King Day, as dozens of teenagers and adult volunteers pitched in to spruce up the building and the area outside the property. Indoors, the morning’s highlight was the work of teens painting a brightly colored mural featuring an image of Dr. King and three clenched fists-symbolizing strength, not violence–in what will become the Warehouse’s art room.

As the painting progressed, other teens from the planning team offered tours of the building.

When the renovations are completed, The Warehouse will take up about two-thirds of the main floor. In addition to the art room, its features include a small gymnasium, a workout room filled with fitness equipment, a demonstration kitchen with a double oven and cooktop, a dance room, a theater, a career and education room, study carrels and a conference room. In the center will be a large gathering area, equipped with tables and chairs, where teens can just hang out. 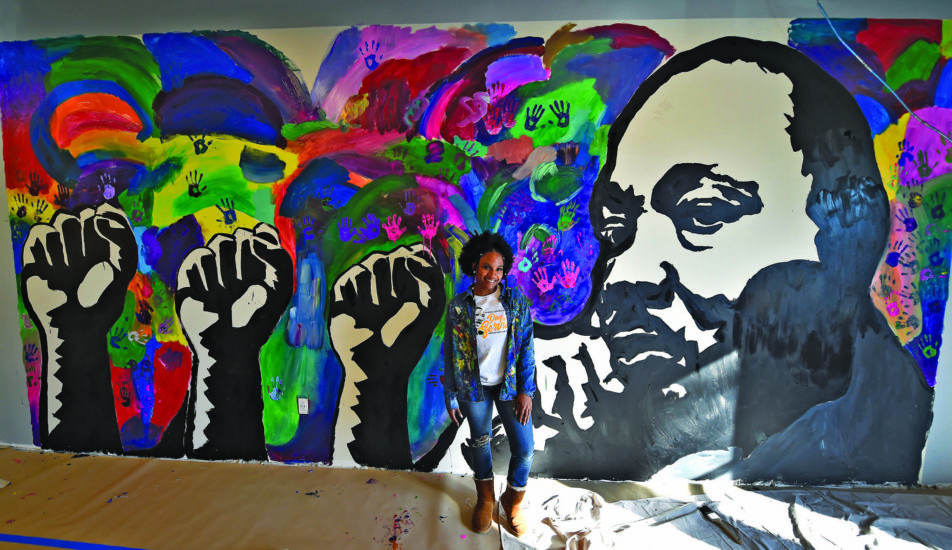 Artist Jannah Williams, 23, of Camden, stands in front of a large mural of the late Rev. Dr. Martin Luther King, Jr., which she designed at The Warehouse. Photo Butch Comegys

The rest of the main floor, on the south side, will provide office space for The Warehouse’s adult managers as well as for key partnering organizations. REACH Riverside will have its headquarters there. Both the state Department of Health and Social Services and Delaware State University’s Neighborhood Revitalization Project, which are planning expanded operations in Riverside, will have office space. So will Strive, an education nonprofit that focuses on developing character-driven leadership. The second floor has been rented to Kingswood Academy, an alternative high school program for at-risk students previously housed at the former Holy Rosary School in Claymont.

Phillips says The Warehouse expects to operate on a budget of $1 million to $1.3 million a year, with a combination of state funding, foundation and corporate grants, and rent payments from partners with office space in the building. “We met our targets for 2020 and now we’re working on raising money for 2021,” she says.

The Warehouse will have a “soft opening” during the week of April 13-17, with an official grand opening to be scheduled later, Phillips says.

Teens who participate in programs at The Warehouse won’t have to pay any dues or fees, Phillips says, but they will have to fill out an application and complete a brief orientation to learn the “For Teens, By Teens” culture. Participants will receive a scannable membership card to use when they check in and to access a schedule of programs.

A young member of the Fashion Steppers Drill Team, based in Wilmington, goes airborne during a routine at the conclusion of a Unity March held in honor of Dr. Martin Luther King Jr. Photo Butch Comegys

At the start, The Warehouse anticipates serving about 250 teens, says Patrick Ryan, its director of programming.

“I don’t know how many we can expect,” says Patterson, one of the teen organizers. “It could be way too many, or only five, but what’s important is that we have the programming that is needed for the kids that do come.”

During the soft opening, The Warehouse will partner with Wilmington’s Department of Parks and Recreation in running a transportation loop that will also stop at the Hicks Anderson Community Center in West Center City and the Brown Boys & Girls Club on the East Side. If that proves workable, the hope is to expand the loop to include stops at other community centers that provide services to teens.

Several shuttle options are under consideration. As part of its $1 million grant, Christiana Care donated a 15-passenger bus that had been used to transport employees and visitors between its sites. Also, The Warehouse is talking to the University of Delaware about using electric-powered buses that are part of UD’s experimental energy-saving vehicle-to-grid (V2G) project.

Programming at The Warehouse will be a collaborative effort involving about two dozen organizations–and perhaps more.

Groups that already have their own office space in and around Wilmington have committed to offering teen-oriented services during after-school hours. These include the Christina Cultural Arts Center, Coded by Kids, Delaware Futures, LYTE Scholars, Tech Impact, TeenSHARP, Year Up Wilmington and Zip Code Wilmington.

The Dual School also anticipates moving some or all of its Wilmington operations into The Warehouse, most likely in the fall, says Zack Jones, the program’s director.

The teens who have been planning the project for nearly two years can’t wait to enjoy the benefits of the program they have helped to create.

Zorah Rothwell, a 16-year-old junior at Mount Pleasant, expects to be spending a lot of time in the demonstration kitchen, learning how to improve her cooking skills.

But that’s only part of her excitement.

“This is my whole life. I feel like I built this,” she says. “I’m going to be here the whole time.”

The REACH Riverside revitalization will likely get its second big boost in May, when groundbreaking is anticipated for construction of 74 housing units near the intersection of Bowers Street and Todds Lane.

That will be the first step in the residential portion of the revitalization, says Logan Herring, CEO of REACH Riverside and executive director of the Kingswood Community Center. The phased project will eventually result in the demolition of nearly 300 outdated housing units operated by the Wilmington Housing Authority and their replacement with about 400 new homes, mostly two and three-bedroom units.

Of the first 74 units, 59 would be sold as affordable housing and 15 at market rates, Herring says. Prices won’t be determined until construction is nearly complete.

When it was announced more than a year ago, REACH Riverside (REACH is an acronym for Redevelopment, Education and Community Health) had its total costs estimated at about $100 million, with a timeline of 10 years, perhaps more, for completion. Other components of the plan include construction of a new Kingswood Community Center building and possible expansion of the Eastside Charter School to include high school grades.

Purpose Built Communities, a nonprofit consulting organization based in Atlanta, has brought REACH Riverside into its national network of revitalization areas and is providing free technical assistance throughout the project’s planning and implementation.